Beefing up your bass on a budget? SVS might have the answer. 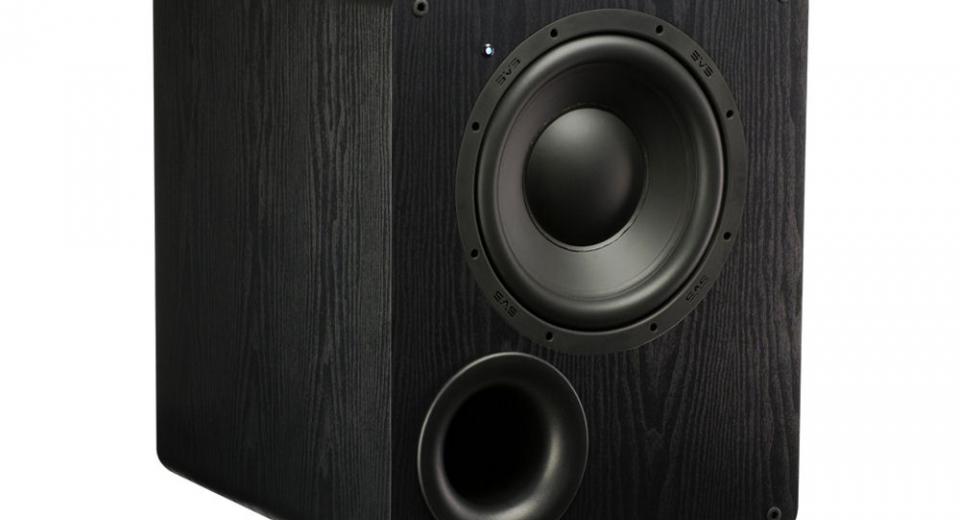 Our recent review of the SVS SB-13 Ultra Subwoofer showed just what the manufacturer is capable of when price isn't an issue. But what if, like most of us, your budget is rather more limited? Well thankfully SVS appear to has that covered as well, with their new PB-1000 offering the promise of heavy-duty bass action at a not-so-heavy-duty price. The new subwoofer has been designed to combine high-tech components and expert engineering to deliver a seriously deep extension and output. More importantly SVS claim to have reached two new lows - a frequency response down to 19Hz and a price of £499. Now that is music to our ears, so let's see how the PB-1000 performs.

As you would expect from a subwoofer that promises bass extension down to 19Hz, the PB-1000 is quite large, measuring 18.4 x 15 x 18.4 inches and weighing in at 46 lbs. So if your significant other is opposed to the idea of a large black box sitting in the corner of the lounge, then the PB-1000 might not be for you. For the rest of us the thought of a decent sized subwoofer is like a shot of testosterone and the PB-1000 doesn't disappoint. It's an old school design using a rigid and braced MDF cabinet with a black ash finish. There's a plastic moulded cloth grille at the front and connections and controls at the rear. The grille is removable and underneath is a ten-inch front firing cone and a 3.5 inch high-flow port with inner and outer flares. Aside of the cone and port, the only other feature on the front is a LED power indicator, which glows red when in standby and blue when active. The location of the LED indicator is one of our few complaints because it's obvious in a darkened home theatre and we would have preferred it if SVS had positioned it at the rear. As a solution we placed some black electrical tape over the indicator during the review process. In terms of the technology inside the PB-1000, it uses FEA-optimised motors for low distortion and long-throw suspension for high output at low frequencies. A high-power voice coil is used for thermal management, a lightweight cone for enhanced sensitivity and transient response and a rubber surround for durability and long-life. The PB-1000 uses a Sledge STA-300D amplifier for efficient and cool-running performance, which is conservatively rated at 300W. However, the ported design gives the PB-1000 a level of efficiency that generates far greater output than a sealed subwoofer with equal amplification. The amplifier includes a DSP processor for control over the PB-1000 at all drive levels. The control knobs are actually digital actuators for precise and noise-free adjustment. There is a continuously variable low pass filter with a disable/LFE setting and continuously variable volume and phase controls. In the eco-friendly standby mode, the PB-1000 only uses 0.3W. At the rear there are the control knobs for volume and phase, as well as the low pass filter that can be set to 50, 80, 120 and 160Hz plus the disable/LFE setting. There is also the auto/standby/on switch and a 3V-12V trigger, a main on/off switch and a two-pin connector for the power cable. There are a stereo line-level RCA inputs, 80Hz high pass filtered outputs and stereo speaker level 5-way binding post input connections.

Setting up the PB-1000 will largely depend on the kind of system that you have but the most common will involve connecting the subwoofer to an AV receiver using a shielded RCA cable. The receiver will perform the upstream digital bass management and send the subwoofer a pre-filtered mono signal. With this setup, you set the low pass filter to LFE, the phase control to zero and the volume control to 12 o'clock. You then just turn on your AV receiver and run the auto calibration routine. With this connection method, you have the option of using the PB-1000 to high pass the signal being sent to the loudspeaker amplifier because the line level outputs feature a fixed 80Hz 12 dB/octave high pass filter. All you need to do is connect the pre-amplifier or processor outputs to the subwoofer line level inputs and connect the PB-1000's line level outputs to the loudspeaker amplifier inputs. You can then adjust the low pass filter on the subwoofer to 80Hz and do a final low pass blending by ear.

We reviewed the PB-1000 in a standard setup with a Yamaha AV receiver that we happened to be reviewing at the time and a seven channel speaker configuration. Our first impression was that SVS weren't kidding about the PB-1000 getting down to 19Hz because at times it felt like a kick in the chest. Obviously there are subs that have greater power and can deliver a more forceful performance but it's worth remembering that the PB-1000 is only £499. In subwoofer terms, and considering the performance you were getting, that a relative bargain. The PB-1000 was capable of a surprising degree of detail in the 20-50Hz range, allowing subtle low frequency details to come to the fore in even the most complex of soundtracks. The bass is controlled and balanced, resulting in a surprising level of precision that gave film soundtracks genuine impact.

We started off with the Blu-ray of The Woman in Black and if it's true that 50% of a film is sound, that applies even more so to horror movies. The sound designers on this old-school shocker knew how to deliver the scares with just some carefully controlled audio. It's a simple trick but as the film is building up the tension, the sound designers will mix the audio down and then suddenly hit you with a loud noise. The wider the dynamic range, the greater the shock and we can tell you, there were quite a few of these in The Woman in Black. We're not ashamed to admit it, we jumped out of our skin on more than one occasion and the PB-1000 played its part in delivering some sledgehammer blows to go along with the Sledge amplification. However it wasn’t just the loud bangs that impressed us, there was a nuanced character to the PB-1000 that resulted in a beautifully integrated bass that deftly danced around the other elements of the audio, adding depth without swamping the rest of the mix. As we recovered our tattered nerves, we put on a couple of scenes from the recent time-travel thriller Looper that we knew had some serious low frequency action. We have heard lesser subwoofers throw in the towel in one particular scene but the PB-1000 took it all in its stride. The source of the PB-1000's balanced but detailed character is the fact that it’s tuned to deliver, with surprisingly low distortion, an incredibly flat frequency response across the entire spectrum of sound it’s capable of producing. Not just that, the frequency spectrum can plumb some incredible depths for a subwoofer with only a ten-inch driver. Going through some of our favourite "big bass" moments in old favourites like Kung Fu Panda and Terminator: Salvation revealed the kind of seismic delivery we have only previously heard on considerably more powerful and substantially more expensive subwoofers.

However the PB-1000 isn't all 'sturm und drang' and was also capable of a degree of subtlety that is a difficult feat to pull off, so congratulations to SVS. In Danny Boyles' underrated sci-fi movie Sunshine there is a scene where the spaceship is heating up as it approaches the sun. The sounds of expanding metal fill the entire 360 degree soundstage and the PB-1000 did a fantastic job of supporting these sounds without ever over-powering them. The result was you really felt as though the spaceship was tearing itself apart around you. Finally we watched The Hobbit: An Unexpected Journey which boasts a state-of-the-art sound mix that includes just about everything. Within the first ten minutes we went from the subtle quiet sounds of Bilbo's hobbit hole and the Shire to the full-scale sonic assault of the dragon attack on the dwarf kingdom or Eribor. Despite all that was asked of it, the PB-1000 never put a foot wrong and we found ourselves hugely impressed by SVS's budget model.

We recently debated the pros and cons of using a subwoofer with two-channel music in a home cinema podcast and opinion is certainly divided. We had previously preferred to just use two floorstanders for listening to music but the surprising degree of musicality that the PB-1000 was capable of had us changing our minds. We tried a variety of music from David Bowie's flirtation with 'drum an bass' in the mid-nineties, to classic rock from the likes AC/DC, whose dirty deeds were done both dirt cheap and just right. However it was the more subtle tracks where the tight bass that the PB-1000 was capable of really shone through. A track like Van Morrison's Sweet Thing with its beautiful bass line just sounded so rich and controlled. In fact the PB-1000 was capable of such a remarkable all-round performance that we had to remind ourselves of just how little it cost.

There's nothing revolutionary about the looks of the PB-1000 but then if it ain't broke... So what we have is an old school black box with a MDF cabinet and a cloth grille on the front. It might not win any design awards and it is quite large but it looks like a classic subwoofer and that's just fine with us. Behind the grille are a 10 inch cone and a 3 inch port, whilst at the rear are the connections and controls. Our only real complaint on the design front is that there is a power indicator light that you can easily see in a darkened home cinema. It's not like you need a light to tell you the PB-1000 is on and if there must be one, can't SVS put it at the rear?

In terms of the innards, the PB-1000 uses motor technology for low distortion and long-throw suspension for high output at low frequencies. A high-power voice coil is used for thermal management, a lightweight cone for enhanced sensitivity and transient response and a rubber surround for durability and long-life. The PB-1000 uses a Sledge STA-300D amplifier for efficient and cool-running performance, which is conservatively rated at 300W. However the ported design gives the PB-1000 a level of efficiency that generates far greater output than a sealed subwoofer with equal amplification. The amplifier includes a DSP processor for control over the PB-1000 at all drive levels.

So how does all this sound? In a word, spectacular! Yes there are subs that have greater power and can deliver a more forceful performance but it's worth remembering that the PB-1000 is only £499. In subwoofer terms and considering the performance you were getting, that is a relative bargain. The PB-1000 was capable of a superb degree of detail in the 20-50Hz range, allowing subtle low frequency effects to come to the fore in even the most complex of soundtracks. The bass was controlled and balanced, resulting in a remarkable level of precision that gave film soundtracks genuine impact. The PB-1000 even performed well with two-channel recordings, displaying a degree of musicality that caused us to rethink our objections to using a subwoofer when listening to music.

If SVS's goal was to create a subwoofer that could deliver deep bass at a price that doesn't require deep pockets, then they have succeeded beyond all hope. The PB-1000 produces the kind of forceful, yet detailed bass that we would expect from more powerful and certainly more expensive subwoofers. If you're looking to beef up the low end in your home cinema but you're on a budget, then the SVS PB-1000 should definitely be at the top of your wish list.