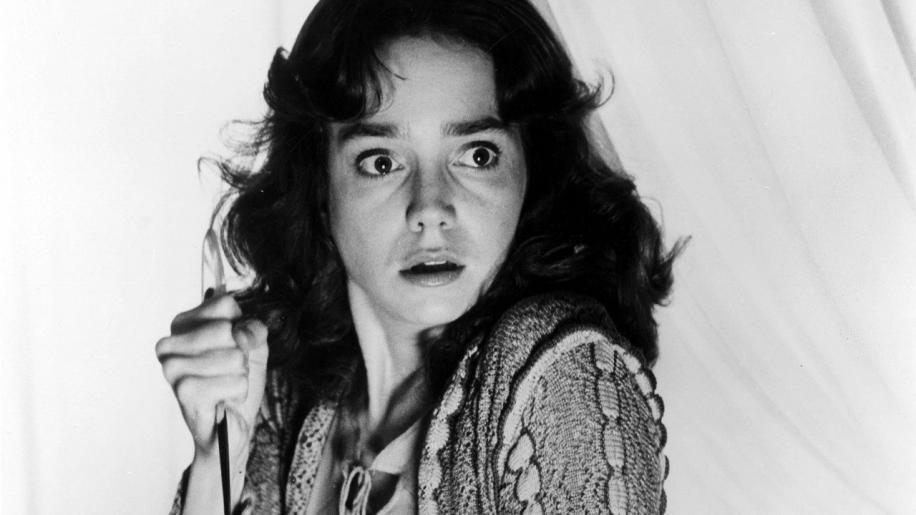 Argento's use of colour and the widescreen image begs to be viewed on the biggest possible screen. The various incarnations of Suspiria over the years have never done his amazing visuals justice, and we have had to put up with hideous pan and scan, censoring and low-grade VHS transfers. Until now, that is.

The image may not be completely pin sharp, but it comes very close. Presented in its original 2.35:1 aspect, and enhanced for widescreen, Suspiria literally throbs with unholy life, the screen virtually exploding with colour.

There is a very fine patina of grain, but the effect is filmic, and does no harm in any way. Considering the huge swathes of deep colour splashing across the screen, there is no evidence of smearing, chroma shift or bleeding (other than from the victims, that is) and the image remains splendidly consistent and stable. Lots of action takes place in locations completely saturated in one dominant colour, red or, very often, blue and the disc copes perfectly with such blanketing and retains the crisp detail within. Blood, quite appropriately, is a rich Deep Red (pun intended). This disc positively glows.

Contrast is impeccable and blacks are supremely deep - just have a gander at that forest at the start, or Suzy drenched in shadow in the back of the taxi. Or even the shocking demise of the blind pianist in the centre of the vast stone plaza for a breathtaking display of threatening shadow. Detail is often intricately delivered - faces, eyes and the marvellously opulent settings. But watch out for the glint of the cut-throat razor attempting to lift the latch on the door, or the shining spectral halo that outlines the position of the wretched Elena Markos. But a beautiful touch is the mesmerising gleam of the mirror used to stun Suzy - it literally flashes out of the screen like an airstrip landing light. Equally well reproduced is the dust moat floating about along its beam.

However, there are one or two instances of very slight blocking during some shots, but these are only minor signs of artifacting and do not detract. But there is one curious frame of Madame Blanc that becomes blurred for a split second, and this is kind of irritating considering the otherwise tremendous spit and polish that Suspiria has, in the main, received. Edge Enhancement is there but, to my eyes, it is minimal and only apparent if you are looking for it.

Overall, it is extremely hard to imagine Suspiria ever looking better than this. A truly awesome picture that brings Hell to vivid life.

When Suspiria was first released, only a few cinemas could actually exhibit it properly, due to its astonishing soundtrack that Argento mixed into a revolutionary four-track magnetic soundscape, an experimental mix that immediately raised the bar for the horrors it contained, and certainly proved to be an endurance test for all those who were privileged enough to catch it first on the big screen. With the advent of home cinema and the versatility of DVD, we can now experience Suspiria as it was truly meant to be heard. And, what a rush it is. Quite simply, they just had to get this right. Hats off, then, for this release has the best tracks that can be exploited - full blown, THX approved DD5.1 EX and 6.1 DTS ES mixes that are absolutely assured to bring the house down around your ears. But, and let's get this cleared up straight away, there has been some controversy surrounding these remixes. There are a couple of well-publicised audio glitches where some sound fx are slightly mistimed (a ringing bell, for instance) but, hey, if we are going to be pedantic about these very slight errors, then we may as well complain about the fact that none of the characters' mouths move in-synch with the words they are saying anyway, due to the dubbing of their voices. Rest easy, folks, the glitches really aren't that noticeable.

I would say that around 95 percent of the new mixes are of almost reference quality, with the DTS track taking the prize. There is a lot of wonderful steerage all the way around the room, really utilising the full set-up. Footsteps and voices emanate from each speaker, whispers, sighing and even Elena Markos' terrifying rasping orbit around you with resounding clarity - sharp, distinct and realistic. There are many occasions when the word “Witch!” is hissed in at you, one or two actually becoming great stingers in their own right. The ferocious storms at the start and during the climax sound full and immersive, with some great thunder cracks rumbling across the ceiling although their full range has been slightly altered from the original mix. The bass boom of the “diabolical didgeridoo” literally makes the heart stop, and Goblin's maniacal score takes on a full-blooded aggression that no other release could ever hope to come anywhere near. But, having said that, the fantastically catchy electric guitar-led theme (used several times, but most notably at the start of the notorious double-killing) seems slightly downplayed in the new mixes and, as a result, some of its hypnotic vigour is sadly dispersed. I'm not at all sure why they chose to do that. However, the common problem with old soundtracks being revamped into surround designs is null and void in this case. Suspiria was always meant to wrap its way around you and go on the offensive from every direction at once.

All the tracks on this release sound terrific but, to my ears, the DTS ES mix is the loudest, clearest, deepest and proudest. A true demo track. I just hope that you are lucky enough to be able to really crank the sound up and not be arrested.

This limited edition 3-Disc release features a nice array of extras. The first disc has the movie plus theatrical trailers, spots for TV and radio, a music video and a poster and stills gallery, whilst the second houses the 52 minute 25th Anniversary Documentary. The third disc is the CD soundtrack featuring the score by Goblin, plus a few extra, and lesser, tracks. We also get a fabulous set of nine reproduced lobby cards and an extremely worthwhile 32-page booklet, jam-packed with terrific photos and containing an essay on the movie from Travis Crawford and a retrospective interview with Jessica Harper.

The International and US Trailers are good for a laugh and the Stills and Poster Gallery is simply huge, with something approaching one hundred images from around the world. Staggering wealth of stuff here, folks. Awesome. We also get three 30 second Radio Spots and the Music Video from Claudio (ex-Goblin) Simonetti's band, Daemonia, performing an arrangement of Suspiria's score. Running for almost six minutes, this is just an oddity. And not a very interesting one, I'm sorry to say.

But, it's over on Disc 2 that we get to the real meat of the matter with the wonderful 25th Anniversary documentary. Arranged into 9 Chapters, this covers everything that you wanted to know about the film. Featuring Dario Argento, his once-wife (whose initial story became the genesis for the film) Daria Nicolodi, Jessica Harper, Stefania Casini, Goblin and cinematographer, Luciano Tovoli, this is full of anecdote and production backstory. We learn of Argento's filming process, his vivid style and singular vision, and of his research into the Black Arts. Nicolodi tells us how the exciting climax of the film is an exact reproduction of a dream she once had, and that she has knowledge of a real academy that teaches the Occult. Though she won't name it, for fear of the danger it would place her in! Harper is very interesting and details the odd working practice of communicating on-set with a cast and crew who all spoke different languages. Casini is totally over-the-top and, quite honestly, irritating as hell, making you actually begin to take pleasure in her wildly nasty on-screen death. Only kidding, Stefania, but ... take it easy, love. This is a great feature. Much of it is in Italian, and is subtitled, but it is a very nice and respectful piece about a true landmark movie.

So, no commentary, then. Or deleted scenes - and I know of a couple that did once exist in the Italian theatrical prints but are sadly no more. But, still, throw in the incredible soundtrack CD (which is worth an individual review. Hmmm, memo to the Editor, perhaps) and this is a great package. The booklet and the lobby cards, alone, would have garnered high marks. Top stuff, folks. As only a movie of this rare calibre deserves.

A genuine cinematic nightmare that has bludgeoned itself in horror film history. Quite the most unsettling motion picture experience that I have ever had. A movie of intricate beauty, of devastating violence, of haunting imagery that will never, ever leave your subconscious mind. Argento has crafted the truest fairytale that cinema has ever borne witness to. He takes us places that common sense pleads we should not go to, yet the entrancing spell his magic weaves makes the journey one we find irresistible. Suspiria is a dangerous film. There is something demonic at work within it, just there behind each and every frame. The intense visuals, the pounding score that lulls, caresses and then shreds the nerves - every startling ingredient is potent and hypnotic.

Argento never made good on the promise he unleashed with Suspiria, never fulfilled his Satanic side of the bargain. The third part of The Three Mothers Trilogy is on the way ... but I dare not hope that he will reach the operatic heights he attained with this.

This limited edition of his groundbreaking movie is all a fan could wish for. The AV quality alone does the incredible look and sound of the film justice. The documentary is packed with juicy stuff and the soundtrack CD guarantees to have the neighbours, or the person sitting next to you on the bus, checking themselves into a mental asylum. If you can find a copy of this version - GET IT. If you can't, then get any widescreen version you can find ... turn out the lights, turn up the sound and prepare yourself for a one-way trip to Hell. This is one film that not only scares you, but scars you, too. Yes, that's right - scars you.