As painful to play as a home amputation 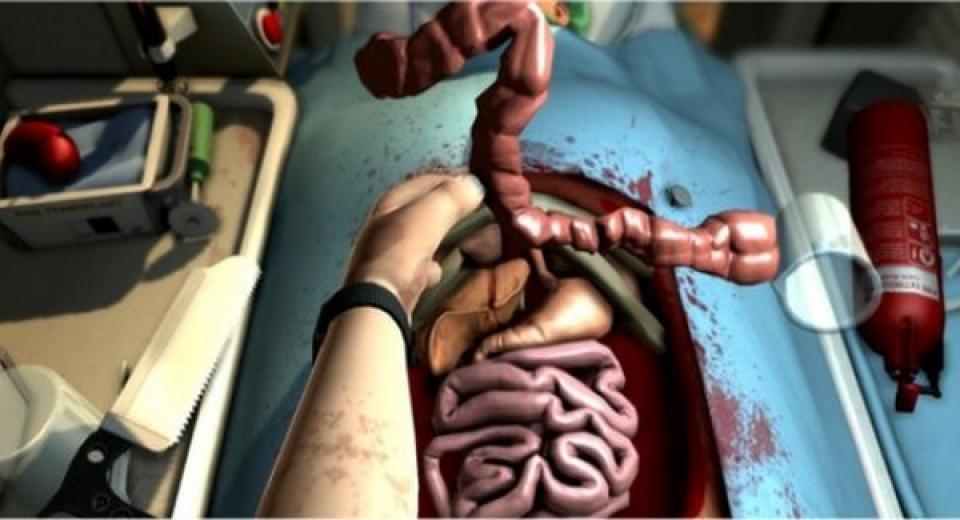 It was only the other week when I was singing praise for the independent developers out there taking on the big guns of the industry and sticking it to the metaphorical man. It’s good to see that people are still spending countless hours behind screens in order to send out new and noteworthy games to those willing to accept them.

My opinion stays unchanged and it’s good to see this, but what happens when the quality isn’t there? Well Surgeon Simulator 2013 has been released on the back of success through Steam Greenlight and now it’s here, it’s hard to see what all the fuss was about.

Bossa Studios are the ones responsible for this get-your-scrubs-on outing and they even go so far as to boast about the fact they spend a measly 48 days on developing it and only 48 hours on the initial version. Well it seems that most of that 48 days was spent doing other things other than focussing on making a game as, at times, Surgeon Simulator can be an utter shambles. It’s like trying to carve a roast dinner with a chainsaw; an absolute bloody mess.

But before we even get to the actual game, let’s focus on the name: Surgeon Simulator. In the traditional PC gaming crowd most simulators put you into a job role of things such as farming, long-haul shipping or flying a plane. You actually do their job; you care about what you are supposed to be doing. So herein lies the issue; when most people will play this just for a mess about (and let’s be honest it was made for such a purpose, never to be taking seriously) why on earth is this classed as a simulator? It’s like calling Call of Duty ‘War Simulator’ but you wouldn’t because that would be plain silly, as it is here.

So, with that out of the way let’s get into the nitty gritty and put the game under the knife. As you’d expect you are presented with operations to complete varying from a heart transplant to brain surgery. These tasks are not simple ones which require your attentiom as you are the difference between life and death for the fella laid in your theatre. So with your single, crazily-flailing arm you embark on your quest to change lives forever. It turns out that it won’t be for the better as your patients will probably end up running straight to the lawyer’s office as soon as they are discharged.

The guys that complete surgery and operations don’t get the recognition they deserve sometimes when they should as they undergo some of the most stressful situations you’d ever experience. One wrong move and that’s it, their job could be in jeopardy. Do you get that sort of treatment here? No is the short answer to that one as you go about willy nilly slicing and dicing like a murderer on the loose.

Surgery often feels like you’re wearing boxing gloves whilst you do so as the control scheme, despite its potential to work, does its best to ruin the experience. The Q, W, E and R keys control your fingers individually with the space bar controlling your thumb movements and the actual layout of these is very good. Your mouse moves your hand about the place and controls the rotation of which your chosen implement needs to be at. It should allow for precise movements to come to fruition but picking up a scalpel is like trying to get two incorrect pieces of Velcro to stick together.

So your selection of tools is as follows; numerous scalpels, a hammer, bone saw, a regular saw, needles full of hallucinogenic drugs, cups and whole multitude of other inanimate objects which obstruct you. Of course, all of these items allow you to complete the most precise of operations including smashing a rib cage to pieces, or simply slicing the stomach in order to rip it out. Safe storage/disposal is of the highest importance throughout as you simply throw all organs around for you to retrieve later. I mean the whole room is sterilised for a reason right? The above actually sounds quite straightforward and enjoyable but it’s not. Surgeon Simulator 2013 is a bad game, and the development team know it but the thing is they are so content with accepting this fact that they are forgetting that a game, no matter how bad, needs to have its basic functions in place. Trying to cut away a stomach or a heart is just ridiculous, you lunge all around their abdomen leaving them to bleed right in front of you. Then, should you get past all the removal of organs, sticking a new heart in is as simple as throwing it in and letting nature do the rest.

The most enjoyable thing about Surgeon Simulator (except from turning the thing off) is the little Easter eggs that are scattered throughout and the interactive menu which happens to be your front desk. You can use the computer, scrawl all over some unimportant patient records with a marker pen and answer the dog and bone. Heck, there’s even a tub of pills which you can empty and launch around the show like a disobedient school child.

Other than the four operations you can complete in the operating theatre, you can complete operations in an ambulance which makes things even trickier. But when the game is as useless as the advent of Penicillin was to me being allergic to it, there’s no reason for you to bother with it. To top it all off, the game is £7 which to the majority of people isn’t a lot of money. But, considering that there is a free online version of this floating around somewhere (offering a level for you to try), you could give that a whirl and soon realise that seven pounds could be better spent elsewhere. Like on some new grass seed which you could watch grow from start to finish, or on some paint you can watch dry on your newly decorated wall.

To summarise, Surgeon Simulator 2013 is not a cut above the rest, it’s broken and about as pleasant as an endoscopy. I would have no problems with this game had it worked and failing being down to me, the user, being stupid. But it’s not, the one hand which you control (this should be called Useless Flailing Left Arm Simulator) is hopeless and an elephant's trunk has more precision than it offers. My biggest problem however lies with the name, because a simulator it is not sir. A simulator is meant to be taken seriously, played properly and appreciated for its difficulty and the fact that 2013 is in its name doesn’t bode well as it suggests that 2014 might bring another title with it. Next time I need surgery or medical attention, someone please remind me to check to see if the surgeon has ever played this game and if so I will take my leave.

I can see why people would find this game entertaining or a laugh at the very least. It could have been a very light-hearted take on a complex subject and one that is a bit of fun, but when it's so intent on doing that and forgets to do the basics that's where the problems start. The control scheme could work but doesn't, the Easter eggs are nice but don't make up for the poor quality overall and it should not be called a simulator. I enjoy a laugh as much as the next blood-hungry gamer but there's ways to go about things and this isn't the right way. Courtesy of a colleague, I wish this game was Sturgeon Stimulator 2013 as stimulating an aquatic creature would be infinitely more fun than playing this rage-inducing title.