Superman vs. The Elite Blu-ray Review 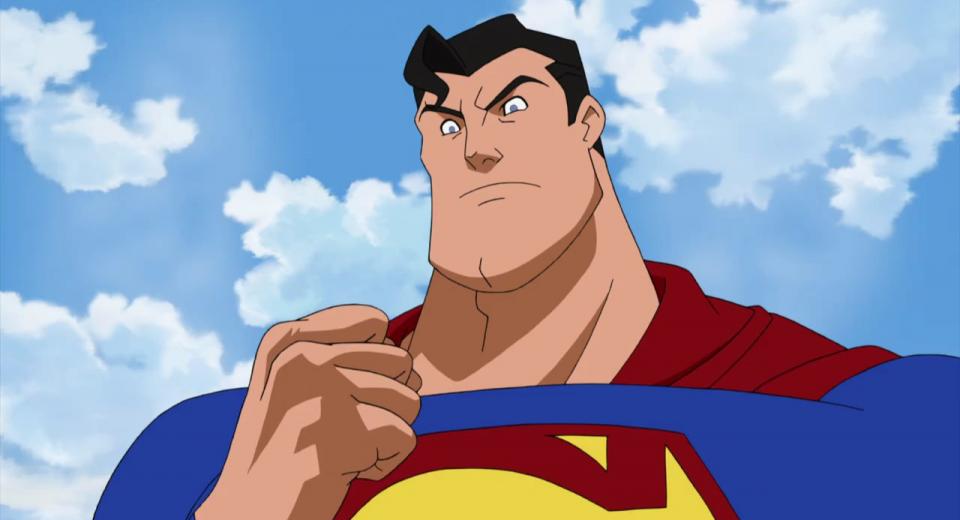 The accompanying audio is more impressive, with a DTS-HD Master Audio 5.1 track that is boisterous and immersive right from the get-go. The thrumming bass undercurrent of the production logo kicks things off to a great start, and the invasive but perfectly chosen punk music track to accompany the alternative opening titles sequence further gives you an indication of just what’s on offer. Sure, there are a few lulls in the storm along the way, but for the most part the action comes hard and fast, bringing with it a suitably rousing score. Surround usage is generally very good – with keen directionality during the punchier sequences, as superpowers are wielded with a gleeful lack of restraint, and Metropolis bears the brunt of sizeable environmental damage. There’s a wonderful LFE input throughout the mix, and with dialogue coming across clearly and coherently throughout – in spite of the heady action – it’s a great audio presentation. As with all of the other DCU Animated releases, we get a whole wealth of extras to accompany the main feature. Unfortunately the series appears to have dropped its regular DCU Animated Short feature which was such a plus point to the earlier releases, but I have to say that Superman vs. The Elite more than makes up for it with a selection of worthy and well-researched efforts that not only illuminate the interesting background to this production, but also explore the weighty socio-political themes that were carried over from the original source novel. It’s without a doubt the most compelling set of extras ever to accompany a DCU Animated release.

Audio Commentary has the original comic writer Joe Kelly partnered up with DC Comics Executive Eddie Berganza to deliver a welcome and informative background dissection of the production, with Berganza largely prompting Kelly, who gives us plenty of trivia into the characters, the original stories (which he wrote), the way in which they adapted it (including a note of the changes made to the animated style), the intentions behind the original comic, and the end result. It’s a great start to a superb set of extras.

The Elite Unbound: No Rules, No Mercy is an excellent 14-minute background Featurette hosted by writer Joe Kelly, who talks about his original comic book run featuring these characters, and explores them in great detail, looking at each and every one of them and comparing and contrasting with the versions we see adapted for this animated movie. He not only allows us a closer look at their histories – i.e. how they all became super-anti-heroes – but also reminds us of just how much darker the tales were in their drawn multi-part format. Well worth checking out.

Superman and the Moral Debate is a further 17-minute Featurette which looks at the ongoing morality of Superman, and the quandary that he finds himself in when faced with the more morally questionable Elite, but also goes beyond and offers up some weighty historical background, with military and police experts talking about the US attitude towards torturing terrorists, and the difficulties found in using Black ops agents and then trying to control their ultimate actions. Perhaps the most telling moment is where one of the experts notes that the methods of The Elites are arguably the best methods on offer (effectively justifying precise Black Ops actions in preference to, for example, standard carpet bombing military action), with Superman only going one better because he has the ability to be precise, without taking a life. Of course, in a world without Superman, what the guy is really saying is that Black Ops are justifiable... food for thought.

Superman: The Animated Series Season 2, Episode 12: Brave New Metropolis offers us an excellent alternate-reality story, which has Lois travelling to a parallel dimension where her death has caused Superman to join forces with Lex Luthor and exert oppressive totalitarian control over the people of Metropolis. Will Lois be able to change his mind or is it too late?

Superman: The Animated Series Season 2, Episode 24: Warrior Queen may not be instantly comparable to the main feature, but there are nevertheless clear parallels to be found here in this tale of a warrior queen from another world who attempts to steal and marry Superman – most notably the way in which Superman must convince her that just because she can kill, doesn’t mean that she should.

What’s So Funny About Truth, Justice and the American Way? Digital Comic is merely a teaser for the comic, with just a few preview pages from the final climax. It’s a nice taste, and a good comparison for the main feature (not just in terms of the animation style, but also the key sequence, which almost acts as a storyboard in this case), but it’s somewhat mislabelled as being a Digital Comic, implying that we get the full story – far from it.

A Sneak Peek at Batman: The Dark Knight Returns – Part 1 is a 12 minute preview Featurette has all the contributing crew (and vocal cast) talking about the significance of this feature, the reasons why it warrants a 2-part tale, and how they set about doing it justice. With plenty of shots from Miller’s original graphic novel, shots of the storyboards, and the vocal cast in action (Peter Weller makes for a perfect ageing Batman), we also get a brief look – albeit in stills form – at the highly anticipated finished product. I can’t wait for this one.

We also get Trailers for Thundercats, DC Comics: The New 52 and the Lego Batman 2 videogame. Superman vs. The Elite has the substance behind it – taking its core story from some of the best Superman tales ever written – and doesn’t really disappoint because of its watered-down, abbreviated version of those events, instead failing only really in terms of delivery; the visual style adopted feeling just that little bit too childish when compared to the adult nature of the story and the dark anti-hero characters that it introduces. There’s still a great deal of entertainment value in here – plenty of super-powered face-offs – but it’s just a shame because the potential in the material is far from fully realised here.

On Region Free US Blu-ray we get very good video and excellent audio, as well as an outstanding selection of weighty extras that delve deeper into the socio-political analogies and real-life events that helped shape the original tale, whilst also detailing the changes made to adapt it. Fans should consider this a worthy addition to their DCU Animated collection on the basis of the extras alone, but newcomers should be aware that this may not be the greatest starting-point in the series, as the jarring clash of the animated style and the dark content may not be to everybody’s tastes. Superman vs. The Elite comes to Region Free US Blu-ray complete with a High Definition 1080p/AVC video presentation in the movie’s original production aspect ratio of 1.78:1 widescreen. Generally, it’s a very looking good rendition, although it’s certainly not picture-perfect – and arguably it should be. Even though it’s fairly simple in style, the animation still looks impressive in terms of this presentation, with the line art retaining solidity throughout, coming across clearly and sharply. The colour scheme is as broad and vibrant as you might expect from a Superman tale, with the vivid tones rendered well, and black levels remaining deep and solid. There are a few less-than-ideal moments, with both banding and artifacting evident to those who go looking for them, but overall this is still a very good presentation, just not quite the reference quality material that some of the other DCU Animated releases have been.