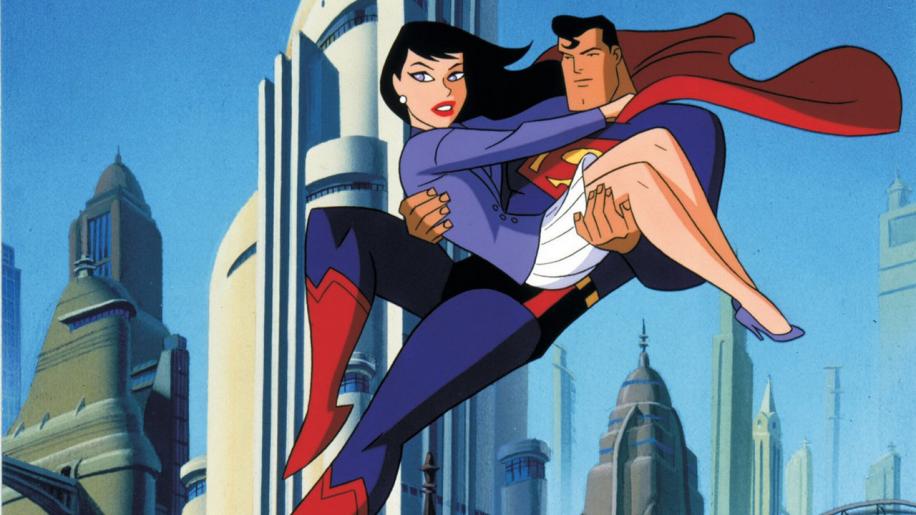 Superman: The Animated Series Volume 2 has episodes presented in a 1.33:1 aspect ratio non-anamorphically enhanced fullscreen format, but they nevertheless look superb. The line detail is solid and consistent, with clarity throughout and no softness. Grain is negligible throughout. The colour scheme is also suitably super, with bright, luscious locations, decent range and depth and solid blacks. There are some video scratches and blips - oddly - but these are largely imperceptible. It is difficult to judge animated TV shows alongside films or even other TV shows, but considering the material, this show looks excellent. This animated TV series has a perfectly acceptable Dolby Digital 2.0 track - just what you would expect for this kind of show. The dialogue is generally clear and coherent, only occasionally coming across as slightly swamped by the score, which is suitably patriotic and 'super' throughout. Effects are fairly frequent - almost every episode features at least one explosion - and are all reasonably represented considering the material. Although obviously the whole package is limited to the frontal spectrum, it is still probably the best audio presentation you are likely to get for this series and is perfectly enjoyable as such. First up we get a Video Commentary by Producer Bruce Timm, Writer Paul Dini, Director Dan Riba and Moderator Jason Hillhouse on the rather odd episode, Mxyzpixilated. In fact, it is a rather strange special feature itself, with the quartet sitting around in a room and talking about the episode, whilst it plays in the corner of our screens (occasionally getting bigger or smaller depending on the action). I don't really see why they could not have just made this an audio commentary because there is no real benefit to seeing this motley crew in person. Comments-wise, they certainly know their stuff, from how to pronounce the name of the lead villain in this episode, to the way you can judge the worth of a Superman theme by whether or not you can sing the word 'Superman' to it.

On the first disc we also get a Featurette entitled Menaces of Metropolis: Behind the Villains of Superman, which lasts thirteen minutes and looks at the various villains that we come across throughout this particular season. The different producers and crew members discuss, in interview, who the primary super-villains are and how difficult it was to interpret all of the less important bad guy characters in a way that would make them any kind of match for Superman. We get clips from this and other series, showcasing the different characters, discussions on the various vocal actors that bring them to life and a little trivia on what ideas did and did not come from the original comics.

The double-sided second disc has two Audio Commentaries by Producers Bruce Timm, Paul Dini and Alan Burnett, Art Director Glen Murakami and Series Director Dan Riba. The first is on the episode Brave New Metropolis and we hear how they came up with the ideas, what previous concepts they based them on and how they put it all together (making comparisons to Batman's style of stories). The second is on the first instalment in the excellent three-parter, World's Finest and we hear all about the ideas behind teaming up Batman and Superman although, annoyingly, they do not pay their respects to the comic series of the same name (which these episodes are indisputably reliant on). It is probably the better of the two commentaries, with plenty of trivia about the characters and their portrayal in these animated shows.

Finally, on the other side of the second disc we just have some Trailers for various other animated shows, including Thundercats, Batman versus Dracula, Batman: The Man Who Would Be Bat, Teen Titans, Justice League and, of course, the Batman and the Superman Animated Series themselves. Superman does not have the dark edge or intelligence of Batman and this can be easily seen by comparing the two animated shows that were made by the same people. Still, if you like your Superheroes bright and patriotic then you can't go wrong with Superman. These series sees all the fan-favourite villains return to do battle and collects the eighteen-episode-run in a package with decent video and audio and some interesting extras. Fans of Superman should not hesitate in picking it up (and those who like animated Batman might want to check it out) especially since it will be nice to have as a comparison to the upcoming live-action interpretation.