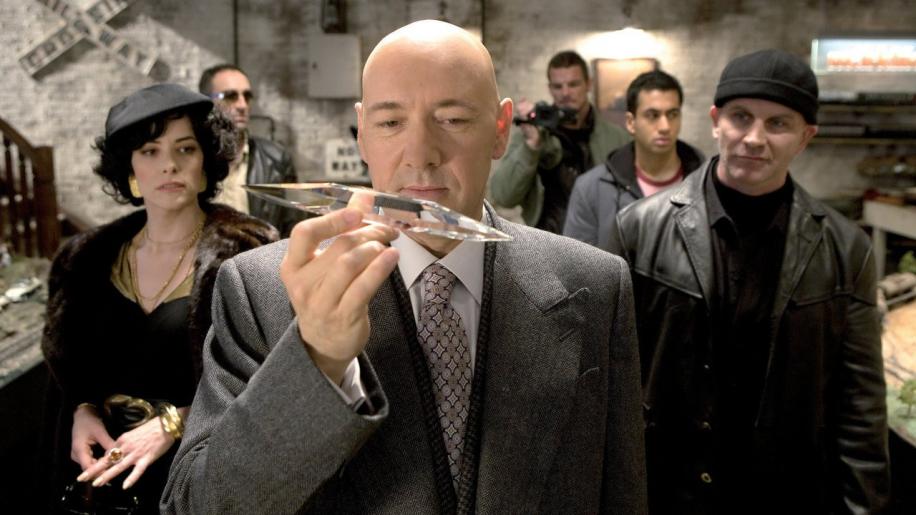 The anamorphic 2.40:1 image for Superman Returns is lush and colourful, yet softened by a warmth that spreads across the screen, denying a lot of the sharpness that may have been expected from such a new release shot, as it was, with new HD cameras. But, having said that, the picture is often quite breathtaking. The initial explosion of Krypton heralds a palette that is keen and rich and almost painterly. The skies above the Kent farmstead in Smallville are hypnotically tranquil, the skipping about along the rim of the Earth's atmosphere have beatific tones that mingle the varied hues of the planet below, the depths of space, the soft radiance of the sun and, of course, the majestic colours of Superman's costume. Flames, such as those seen during the shuttle/plane rescue and sewer-inferno are crisply drawn and vivid and the disc handles such full-throttle and visually complex scenes with accuracy and complete stability. The tiny CG Superman spiralling around the plunging plane is perfectly captured by a transfer that betrays no problems with fast motion or a vast canvas filled with arresting detail.

Skin-tones are very warm and TV-movie-esque and black levels provide a great sense of depth and atmosphere. There is a finite layer of grain visible, which is probably a good thing in that it adds a filmic quality to the image that the otherwise soft sheen would have eclipsed. New Krypton looks fabulous as it rises out of the sea and there is terrific detail on show to reveal every crack and fissure in its pitted and scored surface. On the digital front, I experienced no problems with edge enhancement or compression except for some slow-filtering during one or two underwater shots. The disc manages the sumptuous colours with ease and no hint of over-saturation or smearing.

A great image then, just not as sharp as I would have liked. Mind you, there is that HD version out there, too.

The DD 5.1 mix supplies all the necessary boom and bombast to the proceedings that you would expect. The score is the most immediately splendid thing to mention, electrifying the set-up with a warm and rousing rendition of that theme tune. The stereo spread across the front is impressively wide and well-produced with depth and a good sense of directionality. The rears come into play often and certainly help to provide a convincing and accurate presentation of swooping front to back effects, city-street ambience and ear-twitching activity. The stand-out moments come during the shuttle/plane rescue, unsurprisingly, with some tremendous effects soaring around the room and a nice deep level of bass to secure a dangerous sense of weight and menace to the plight of the aircraft. The little sonic boom as Superman is first seen through the window is nicely rendered. And you best be prepared to duck when the madcap machine-gunner on the roof lets rip with his multi-barrelled canon.

Yet, all too often it is John Ottman's lush score that benefits the most from the DD mix. There are times when it literally engulfs the room - which is great, because I love his music.

Disc 1 contains just the film, whilst over on Disc 2 we find the full selection of special features.

Well, I'm going to discount the selection of eleven Deleted Scenes (running for roughly fourteen minutes with a Play All option) because they add exactly nothing to the film itself and, although they all come in with a nice widescreen image, often only amount to about thirty seconds of scene-additional footage. Just where are the good scenes that Singer filmed and then removed, eh?

But any minor moans about the lack of exciting extra footage are rendered null and void when compared the vast and immensely comprehensive making of documentary, entitled Requiem For Krypton: The Making Of Superman Returns. Running for almost three hours and split into five sections - Secret Origins And First Issues: Crystallizing Superman, The Crystal Method: Designing Superman, An Affinity For Beachfront Propery: Shooting Superman, The Joy Of Lex: Menacing Superman and He's Always Around: Wrapping Superman - this epic presentation is right up there with similarly styled documentaries that accompanied the likes of Gladiator Extended Edition and Kingdom Of Heaven Director's Cut. Charting the film's genesis from the days when Singer and his fellow writers took it upon themselves to fashion a new screenplay that would honour Donner's original before actually being given the assignment, this is simply mind-bogglingly immerive stuff. Smartly designed and revealing a completely warts and all approach to dissecting the icon's return to the big screen, there is literally no stone left unturned. However, there is a downside to all this information-overload. Maybe I've gone a documentary too far but, despite being a major fan of both meaty making-ofs and Superman, I have that, this time out, there was just too much material covered here. Folks, no matter how much you enjoy peeking behind-the-scenes of these blockbusters, there has to be a cut-off point. For many reasons, this impossibly stuffed-to-the-gills documentary actually bored me rigid. Maybe it was the endless footage of scenes being set-up, run-through and then acted. Maybe it was Bryan Singer's motor-mouthed spiel and the almost zealous devotion he has for Superman. Maybe it was trying to keep track of the literally hundreds of people who participated and had their say ... but this documentary possibly told me too much. Now, I'm not going to mark this release down for being so anal about its subject matter, especially when it is commendable that filmmakers devote so much time and effort to chronicle the production of their movies to please their fans, but this type of thing - as user-friendly and access-all-areas as it is - is often in need of some extreme tightening-up and cutting down. Within this vast and sprawling expose there is a fantastic making-of that covers every aspect with style and wit, but then it has been saturated with so much excess baggage that it has become waterlogged and bogged-down under the weight of its own sense of importance and grandness.

My advice is to take it in small doses.

But, on the plus side, look out for the great little selection of outtakes and slip-ups, especially the one from Marlon Brando's Jor-El where he forgets the name of his own son - it's a gem.

The brief segment entitled Resurrecting Jor-El is merely a little piece of digital filler though, folks. Running for a scant three minutes, this just shows us a facial pick and mix for the actor and slots in a few soundbites of Jor-El's infinite wisdom. Cute, but not exactly groundbreaking or revelatory.

Then we have some trailers for this film and other Superman discs, such as the Christopher Reeve Collection and Justice League.

Although a disappointment in the action-stakes, Superman Returns is still a worthy addition to the hero's canon. Bryan Singer weaves a tapestry around his life-long inspiration that is composed of pure love for the character and, even if this sentimental quality occasionally threatens to engulf the film at large, he is savvy enough to pitch in a couple of controversially aggressive scenes and, at the very least, one totally awesome set-piece that sums up all of Superman's nobility, strength and dedication. Visually captivating, musically inspiring and emotionally relevant, Singer's film yields much of worth and certainly bodes well for more instalments - the heart and soul are in place, now give us the splendour and the carnage.

This standard DVD release has smart AV quality and a truly whopping documentary to back it up. The Deleted Scenes are a big let-down though, and the obvious indication is that there will be an extended cut of the film released at some point further down the line. Still, there is enough on this disc to keep you entertained for quite some time. Superman Returns, whilst flawed, is still highly recommended.