The Dark Knight Returns still sets the bar for animated comic book adaptations; a high standard that less faithful works like this struggle to reach 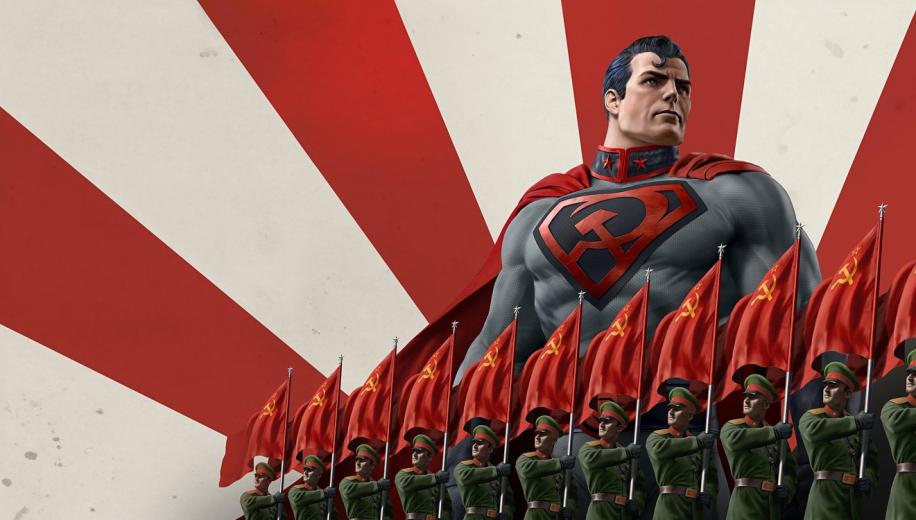 Superman gets an innovative Russian makeover in this Elseworlds spin, although some of the changes to Mark "Kick Ass" Millar's source material lessen the impact.

Whilst live action DC still scrambles around trying to find a cohesive 'universe', the animated features continue to churn their way through every classic tale available - we've had Year One, The Killing Joke, Under the Red Hood, Death of Superman and ﻿Hush - and even a couple of Elseworlds alternate reality efforts like Gotham by Gaslight, but the reality is that only a handful have been absolutely stand-out gems: The Flashpoint Paradox and The Dark Knight Returns likely head and shoulders above the rest. Clearly the more faithful efforts succeed where the less faithful ones don't, relying on the power of the source work rather than twisting it into something that better suits the 'animated universe', or perhaps even better suits 2020, which is certainly what has happened here with Red Son. Thankfully, the modern tweaks don't ruin this latest adaptation, merely adding salt on the wounds that are largely inflicted from a streamlined approach that loses some of the bite by almost completely jettisoning the high-impact ending in favour of something a little softer.

Red Son has a strong enough opening pitch, though, to weather the changes well - for the most part - through its novel idea of Kal-El (voiced by Jason Isaacs, channelling his inner Death of Stalin) landing in Russia, being brought up by Stalin, and turning out a whole lot more state-driven than the Superman we know. Lex Luthor is just as obsessed with him, but is also married to Lois, and seemingly fighting for right as he tries to figure a way to stop the oppressive might of this one-man super-power. The subsequent conflicts are an interesting twist on the familiar, leaving you constantly wondering whose side you are really on - are we really backing Luthor's USA as they try their best to take down Superman's Russia? Throw in a very different Wonder Woman, and a not actually that different Batman (still using smarts to outwit superpowers) and you have a reasonably intriguing story let down only slightly by its conclusion. It's a shame really, because Red Son wears a proud 15 certificate but doesn't have the maturity to quite use it, taking the sheen off an initially very promising effort, and leaving it falling shy of some of the more faithful adaptations that are the cream of the DC animated universe.

Red Son hits UK Blu-ray courtesy of Warner, who - as is their M.O. - don't afford it a 4K release in the UK (unlike the US, who consistently get 4K DC animated adaptations) despite the fact that we recently had our first 4K animated box set. The disc presents a 1080p/AVC-encoded image utilising the original aspect ratio of widescreen 1.85:1.

As is pretty-much par for the course when it comes to these animated releases, Red Son delivers the goods, but falls just short of either demo or reference stature. There's some strong line detail, and nuanced background detailing and fine shadowing, whilst the animated style retains the classic look and eschews that slightly more modern style a few recent efforts have boasted (Wonder Woman: Bloodlines).

The colour scheme, unsurprisingly, revels in its reds and golds, albeit with Superman wearing a considerably more muted outfit, and decent black levels rounding out the palette.
﻿

Warner's accompanying DTS-HD Master Audio 5.1 track is a punchy mix which does a solid job championing the Russian vibe and flavouring this unusual Elseworlds piece.

Dialogue remains well prioritised, as is normally the case, keenly disseminated across the frontal array whilst the effects get more directionality across the surrounds, sparking up life during the frequent action sequences (some of which are quite inventive, particularly in the final act), and maybe even occasionally wielding a little LFE impact. Certainly the closest we get to earning that 15 is through the extended beat-down, which has some heavy blows, whilst the score affords a suitably Russian backdrop.
﻿

The extras, as is normally the case for these animated offerings, are pretty good actually, even if the Animated Short is a little bit lightweight, dredging the barrel of short stories as it tries to bring The Phantom Stranger to the fore, but doesn't really do a very good job pitching him.

The extras are pretty good actually

Far better are the usual added Justice League episodes, and we also get a couple of episodes of the Red Son motion comic (worth dipping into if you haven't read the book), a Featurette, and a trailer for their next production, Justice League Dark: Apokolips War.
﻿

Red Son is a superb Elseworlds tale in graphic novel form, and the DC Animated adaptation, particularly with the freedom of a 15 Certificate, could have been utterly faithful to the source material and maybe pulled off one of their strongest efforts yet. Unfortunately, whilst the fabulous premise remains intact, some of the latter changes lessen the final blow, rendering this still a solid DC Animated entry, but not a particularly standout one.

Warner's Blu-ray release affords Red Son very good video and audio and a solid selection of extra features. One might wonder the logic behind not bothering with a day and date 4K release of the title (given the 4K Blu-ray available in the US, and given also that the UK has broken the curse by actually releasing a 4K set of older DC Animated titles) as this doesn't particularly sell the idea of there being any benefit to the enhanced format, at least not for this entry. Nonetheless, fans of the film should consider this a solid set.
﻿