Superman gets reborn by way of Neon Genesis Evangelion and the animation from... Archer? 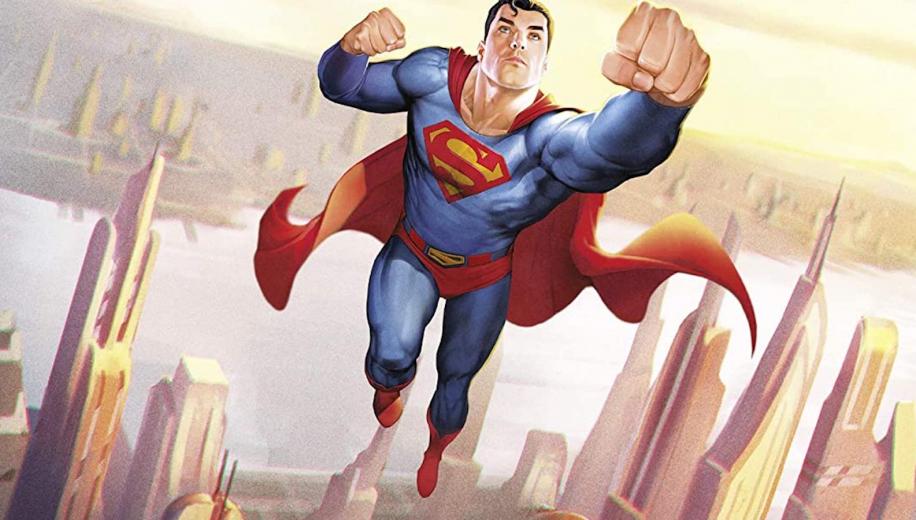 Possibly a reboot of the DC Animated Movie Universe after the excellent but climactic Apokolips War, Man of Tomorrow reintroduces a young Superman-in-the-making, and throws the bounty hunter Lobo and the Martian Manhunter into the mix too.

Mimicking the comic books from which the franchise was borne, The Man of Tomorrow marks the start of a new cycle of animated adaptations, reintroducing Superman with a tweaked origin story and new opponents and somehow, despite covering some familiar ground, ending up a very different animal to everything that has come before it. Sure, it's got hints of Doomsday about it, but this tale brings the Man of Steel back to the fore in an explosive new fashion, with a new style to boot.

Struggling to explore the limits of his powers saving the world whilst retaining his anonymity, young reporter Clark Kent finds himself pushed into a corner when intergalactic bounty hunter Lobo lands looking to collect, and wielding a kryptonite ring which gives him an advantage over the unexpecting soon-to-be-Superman. When a bigger enemy arises, however - an accident-borne creature dubbed Parasite which can absorb just about any energy it encounters, Superman may have to rely upon not only his newfound friend The Martian Manhunter, but also his worst enemies - Lobo and Lex Luthor - if he wants to stop it.

Although it takes a minute to get used to the animated style - which is basically a flashier spin on the superb, but also superbly witty, Archer TV series style - as well as the new character design (Superman gifted a more classical look; Lois given a welcome twinge of Aeon Flux about her), the story is more than up to the challenge of reintroducing you to both familiar and not-so-familiar faces.

Lobo is tremendous, a whole lot of fun, whilst The Martian Manhunter gets some great moments, with the Big Bad one of the toughest enemies ever faced by Superman, and that includes Doomsday. Parasite is a fabulous creation, pure Neon Genesis Evangelion in design, and scary as all hell. Zachary Quinto's Lex is suitably mischievous, but what do you expect, and there are plenty of surprises along the way in this new addition / soft reboot of the larger franchise. If the series builds on this fabulous start - possibly one of the best solo Superman tales we've ever had - it could end up being something really quite special.

Superman: Man of Tomorrow comes to Region Free UK Blu-ray courtesy of Warner who delivers an impressive release, although continues to shun the UK when it comes to offering a 4K alternative (the US gets this in 4K Blu-ray).

The disc presents a 1080p/AVC-encoded image in the film's original aspect ratio of widescreen 1.78:1.

This is a very different animation style to what most DCAU fans would have come to expect - a welcome change, sure, but very different nonetheless, and a little easy to draw comparisons to Archer before the action kicks in, and the backgrounds wow and you realise it's a very nice looking feature indeed. Line detail is strong, shading excellent, and shadowing impressive too, whilst the backgrounds allow for a richer landscape than many will be used to. And the action is superbly kinetic with arguably more impact - hopefully this is a style that sticks around, and the Blu-ray presentation does a tremendous job with it, enjoying every frame, and revelling in the wondrously vibrant colour scheme, rich with eye-popping hues and deep inky blacks. It's hard to tell quite what an upgrade a 4K release would make over this excellent release - which is arguably better-looking than any of the preceding DCAU entries - however, it's a shame that we've been robbed of the chance to find out for ourselves.

Dialogue comes through clearly and coherently throughout, whilst effects are excellent, booming with intensity across the array, and creating an immersive space for the action to explode in. And it does get quite ground-shaking, particularly as it builds to the finale. The score is suitably effective, although not desperately memorable, getting solid priority across the array and, all in all, it's a very good mix.
﻿

Warner continues to serve up some solid extras, delivering the usual array of Featurettes, Previews and Episodes from their TV series library.

The two dedicated Featurettes look into introducing the colourful character of Lobo and reintroducing The Martian Manhunter, whilst a couple of DC Vault episodes from Superman: The Animated Series afford some more 2-part fun with Lobo. The disc is rounded of by a Sneak Peak at Batman: Soul of the Dragon, which is the next in their line-up, and a few Trailers.

It's much more organic to find an animated franchise being rebooted - much like the comics they were borne from - and after the climactic Apokolips it's great to see this new DC Animated Universe getting off to a great start with the fast-moving, hard-hitting, witty, but surprisingly dark Man of Tomorrow. The jury's out as to which is correct between the Director's suggestion that this is indeed the start of a new cycle and Warner's denial of the same, but either way it's an impressive new chapter.

Warner's UK Blu-ray release - even without the niggle of not having access to the 4K release that the US gets - of Superman: Man of Tomorrow is very good indeed, with excellent video, strong audio and a solid selection of extras. Fans should add this to their, by now, extensive collection.