Set the mould for superhero movies 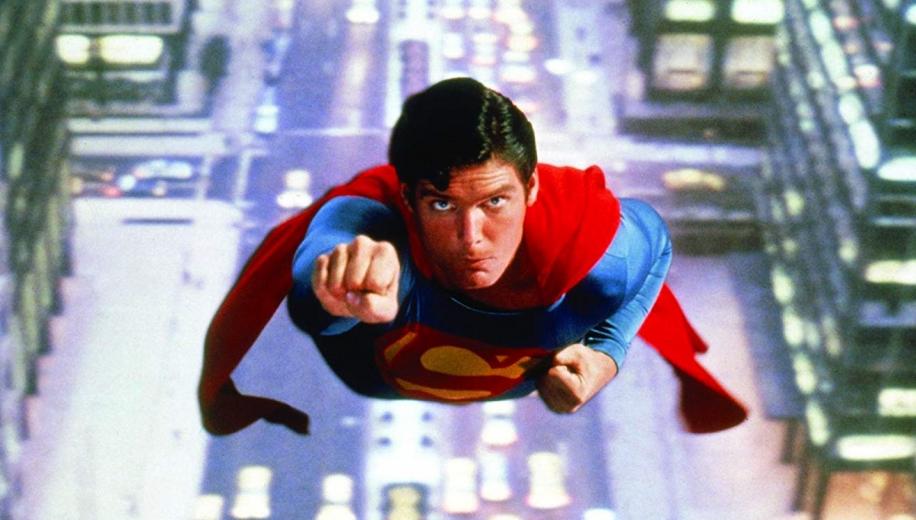 Your name is Kal-El. You are the only survivor of the planet Krypton. Even though you've been raised as a human, you are not one of them. You have great powers, only some of which you have as yet discovered.

Superman The Movie has a lot to answer for. Until 1978, Superman was just that, a ‘super man’. Oh, he had ‘super powers’; faster than a speeding bullet, more powerful than a locomotive, able to leap tall buildings in a single bound - powers inaccessible to humans, but all within the realms of possibility, albeit fantasy. Superman had been seen in comic books, in animated adventures and had live action TV shows, but in all that time, the only power to change was the ability to fly – a natural extension from ‘leaping tall buildings’. Then along comes Superman the Movie and suddenly there is a new string to his bow. Superman can travel so fast he can turn the world back and reset time. So not only is he completely invulnerable, dissipating any peril, but now nothing matters because any catastrophe can be reversed!

But it also set the mould for superhero movies for all time. Origin stories pretty much follow the path laid down here. It made a cultural icon of Christopher Reeves, an actor so perfect for the role, and a person so much the part that in most peoples' eyes he is still Superman. The suit was the correct colour, his actions were driven by uprightness and he perfectly stood for ‘truth, justice and the American way’. Despite the tortured filming set, the heart was in the right place and the script was perfect; there is a wholesome charm about the piece that modern films simply don’t possess. The film is character, rather than action, driven. Superman’s immense strength is shown but not at the expense of fighting and his moral compass is on point.

Oh yes, the film has a lot to answer for. And it does so. In spades.

Superman The Movie was shot using Panavision cameras on 35mm film. This 2018 UHD release was made using the original camera negative which was scanned at 4K resolution and has been utilised for this Ultra HD Blu-ray release. The disc presents a native 4K 3840 x 2160p resolution image in the widescreen 2.40:1 aspect ratio, and uses 10-bit video depth, a Wide Colour Gamut (WCG), High Dynamic Range, and is encoded using the HEVC (H.265) codec for HDR10 and Dolby Vision. We reviewed the Region free UK Ultra HD Blu-ray release of Superman on a Panasonic 65DX902B Ultra HD 4K TV with a Panasonic DMP-UB400 Ultra HD Blu-ray player.

Geoffrey Unsworth’s cinematography has been faithfully retained in this new presentation, which means the soft focus, defused light and grain are all present and correct and give the film a-place-in-time look that is as far removed from the modern digital pin sharp imagery as can be. Don’t come expecting clarity and definition; that is not what this presentation is about - think romanticism, dreamlike and craft. It is a picture that exhibits the quality of film and reminds you how film should look when properly treated. That said, there is still plenty of definition to the edges, check out the crystals of Kal-El’s spacecraft, the New York skyline, the Hoover Dam or skin texture and clothing weaves; you will find greater detail than in the 1080 image.


Soft focus, defused light and grain are all present

Colours are that much richer with more depth, check out the blues, reds and yellows of Superman’s suit, or the depth of red as Krypton is collapsing. See how defined Miss Teschmacher’s red dress is against the grey of the road, or the definition of the army greens. Flesh tones are very natural, and the blue of the sky is tremendous.

Black levels are, for the most part, deep and strong; the first night of Superman’s rescues, starting with the helicopter crash, showcase some defiant blacks with reasonable shadow detail, likewise the underground train tracks of Luthor’s lair are suitably dark. There are plenty of occasions when the blacks do grey though, but this is meant to be there and not a fault of the transfer. Indeed, the black level adds significant punch to the colours. The white end is equally as good, with plenty going on and no detail missing, highlights, such as light glinting from the crystal spaceship, or off water, or in the Fortress of Solitude, never fail to impress. Check out the single green crystal and how it glows.

Digitally there are no compression issues, there might have been some slight banding in the first scenes on Krypton, but otherwise, the source is clean and bright. As stated, there is plenty of grain in this image, particularly at the beginning, and during rear projection shooting – for the most part this is held really well and natural, but I can see one being dismayed by the amount in some scenes. It is supposed to be there. On the whole, this is a wonderfully film like image and it is unlikely to ever look any better than it does here.

There are two English tracks to choose from, Dolby Atmos and Dolby Digital 5.1. The Atmos track is engaging and quite aggressive in its treatment of the surround channels, for example the opening credits with the ‘swoosh’ of the titles is amazingly loud when compared to the surrounding music; likewise the various crashes, crumbling and crunching during Lois’ car crushing in the earthquake is claustrophobically loud. This enhancement of the effects does give an overall sense of immersion, you are flying, you are being crushed, you are in a subway tunnel, and is really the point of the track. Dialogue is always clear and precise and is mainly rooted to the front, while the score is lovingly layered into the mix, sweeping majestically around the surround stage.

The Dolby Digital track is, by contrast, a far softer affair; by that, I mean, it is nowhere near as aggressive in its placement of the effects, preferring to play on realism rather than immersion. This means that the credits swoop around and don’t hammer into you, while the car is being crushed you feel the pressure rather than being pummelled. Dialogue maintains its clear nature and is even more directed towards the front, while that magnificent score is given the same loving attention.

It is interesting that the Dolby Digital is the default track, but easy to see why: it tries to reproduce the original cinematic experience without the need for the additional immersion from the newer format, and including both, allows fans to choose.

All the extras are previously available and spread over both the 4K disc and the included Blu-ray.

UHD Disc
Theatrical Version of the film
Audio Commentary – With executive producer Ilya Salkind and producer Pierre Spengler, who were recorded during separate sessions and spliced together to create a whole. While the two are certainly proud of the film, their respective discussions concentrate on the production of the film in terms of budgets, publicity, money made, money spent, disagreements, and are a side not often spoken about on commentaries; not for everyone, but has a certain amount of entertainment value.

Blu-ray
Extended Version of the Film
Audio Commentary - Director Richard Donner and creative consultant Tom Mankiewicz are together to discuss the film, like the old friends they actually are. The chat is light, the anecdotes even lighter but the two are clearly having fun reminiscing about the production.
Taking Flight: The Development of Superman – 30 minute feature covers reasonable ground with plenty of interviewees talking about the film’s pre-production development.
Making Superman: Filming the Legend – Another 30 minute piece that this time covering the filming, and covers a lot of ground and is a bit more warts and all with regards to the behind the scenes dramas of the shoot.
Original Screen Tests – 22 minutes of screen tests introduced by casting director Lynn Stalmaster.
Music-Only Track
TV Spots
Teaser Trailer
Theatrical Trailer The significance of Superman cannot be understated; it created an icon for its lead actor who simply was the character, so much so that in many peoples' eyes, Christopher Reeves is still superman. The film set the mould for not only future Superman films but for nearly every comic book character origin story. But more than that it is effortlessly charming, wholesome and personifies the hero in super hero. By placing character before action, and plot before punch-up, Superman is a genuine classic of the genre.

The 4K UHD set from Warner is very good, the package contains a native 4K picture which is bright, colourful and faithful to the original source, by retaining the grain, soft focus and light diffusion while taking on the greater dynamism of colour and black levels that propel this image to the best it has ever been. The two English surround tracks both have equal merit; the Dolby Atmos is aggressive and dynamic, the Dolby Digital 5.1 reproduces the cinematic experience. While the extras package is nothing new there is enough contained to keep the discs spinning.