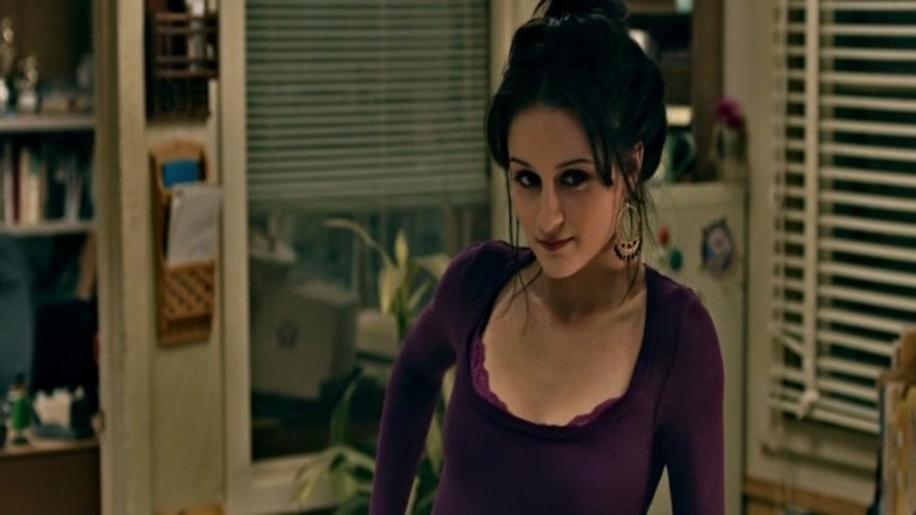 Hybrid, as it’s known here, or Super Hybrid, as it’s known elsewhere in the world, is another attempt by director Eric Valette’s so scare us by putting the fantastique into an ordinary object. He tried and failed miserably with 2008’s One Missed Call which utilised mobile phones; here it’s cars that are given the ‘scare’ makeover. At least that is what the advertising bumph would have you believe. Unfortunately, Hybrid is another stinker that fails to engage on pretty much any level, despite an initial idea that could have some merit – but it’s handled so badly that you wish it would just stop. Let us then strap ourselves in and spin the wheels on tonight’s feature, Hybrid in 3D.

The film opens up with a night time aerial view of a city bathed in neon streetlamps as we follow a car winding its through the traffic. I really like this opening, quite apart from its 3D possibilities, the music, the ethereal movements of the camera and the lighting evoke feelings of mystery; we’re set apart from the world, as if we are preying on it, which, considering the movies themes is a neat idea. Unfortunately this opening scene is the best part of the film; from here it’s downhill, for ninety minutes. We are then ‘introduced’ to the antagonist of the piece: a black car that weaves its way in and out of traffic, pausing only to ‘look’ at pedestrians. At this stage (if you ignore the gratuitous cover art and tag lines) we don’t know exactly who or what this car is about, it’s behaviour is predatory but then I’ve seen drivers behaving in such a manner on my journey home every night. It’s only when the vehicle pulls into an alley way that the idea behind the car becomes evident. It uses a kind of ‘predator’ view; in that it watches pedestrians in heat vision, our first inclining that things aren’t quite right; it then follows two hapless gents as they make their way out of a bar. With a sudden ‘gloop’ noise the once black, non-descript car is suddenly a gorgeous red sports number, complete with keys in the ignition and as such is too much of a temptation to our idiot drunks – who on the pretence of a joy ride, jump in and, as the windscreen blacks out, are munched upon. We now have an idea on what our antagonist is; a shape shifting creature that hides itself within plain sight as the common automobile, making use of humankind’s inherent weaknesses of curiosity and stupidity, to provide itself with an unending supply of food stuffs. This is quite a neat idea – how many cars are there on the roads; how easy would it be for such a monster to actually exist; it’s based on real trapping creatures that use camouflage and subterfuge to capture their prey, normally found in coral reefs at the like. The next scene is another that I quite like and works well; the last meal were the two idiots that were obviously on ‘something’ probably drunk but who actually knows? After its meal the car drives very erratically, swerving all over the road, essentially drawing attention to itself, i.e. it’s been affected whatever it’s trying to digest, when suddenly it is blindsided by another road user in what must have been the films biggest stunt – the two vehicles were completely mashed, and the police conveniently inform us that no one could have survived such an impact, though strangely there was no one in the black car. Dah dah dahhhhh.

It is at this point that the film proper starts. We’re introduced to our main protagonist Tilda in a gratuitous bra and panties shot (which I’m not complaining about, per se, these horror’s do need an amount of flesh, it's the law, but this does seem kind of forced in for no other reason than to just show off actress Shannon Beckner’s body) before we discover a little about the character. Seems she’s in a bit of a doomed relationship, put upon, but determined – traits she’ll need later. Meanwhile the city has brought our monster car to the very repair garage that Tilda works in, fate can be a real bitch at times huh? The garage is being closed for the night due to a refit, meaning there is minimal staff on hand to clear up and move all the remaining vehicles to their proper place. So what we have being set up is the age old ‘trapped group’ scenario, it only remains for us to discover exactly how our ‘heroes’ are going to be trapped and menaced. Here is where things really start to go awry. The car is repairing itself, but instead of remaining camouflaged it elects to eat the first human, one of our intrepid mechanics, that comes along. I guess it was hungry after pushing out all its dents. Upon the discovery of the missing man, the rest of the staff, which comprise of an idiot and mean boss, the underappreciated secretary, two further mechanics and Tilda work out that there is something sinister about the car – it has no engine that they’ve ever heard, plue none of them can identify the year it was ‘made’, oh and to top it off, it drives itself and tries to run them over; prompting the one line of exposition as to the origin of the beast – it’s a hybrid that camouflages itself to catch prey – well dur, but a hybrid of what exactly? We’ll never know. But, upon this discovery the mean boss locks the doors so that no one can get out (yes we have the trapped element) and wants to catch the beast and sell the story to the news. Yup, you read right. That is the set up. In the land of lame ideas, that one resides as king. The entire premise is ludicrous; let’s say for arguments sake that these events took place, boss man traps everyone with his idiot idea – it's a garage, there are oxy-acetylene tanks around, probably angle grinders, even something as simple as a hammer would be enough to use as an escape tool – but do any of the morons that work there think of such?

Anyway, our work team, apart from Tilda, who was given the thinnest amount of characterisation, are nothing more than cannon fodder – sheep quite happy to be herded by the car who uses its skilful camouflage techniques to constantly outwit the idiot humans; honestly how difficult is it to notice a car/pickup truck/van that was not there a few minutes ago? With such a lack of empathy to the characters and with little or no investment into their plight due to the complete improbability of it all there is simply no tension – in fact I wanted to see them all run over and eaten just so the film would hurry up and finish. Indeed the more I think about it the more I am getting annoyed by how stupid the set up is, like how any of the staff could put themselves in harm’s way – a car needs space to drive in, so why not just keep to the stairs. The group dynamic is set up to give us conflict between mean boss and Tilda’s headstrong survival instinct, and again is something that could have worked, but it’s wasted by no talent actors shot in poor light with no imagination; i.e. you simply do not care. Add to this the poor effects (obviously a budgetary constraint, so why show so much of an obvious CG creature, why not hide it away and let our imaginations fill in the blanks?) non-dramatic, or should that be overly dramatic music to try and instil some kind of energy, on top of lazy and pedestrian direction and you are left with a seriously flawed film. I do like the idea, but it’s handled so badly and delivered in such a poor fashion that I simply cannot recommend this film. It’s astonishing that it got the limited theatrical run that it did – this is made for TV, straight to DVD hell; why anyone would want to convert it to 3D is another mystery as that does nothing, and in fact makes the whole thing worse due to the 3D being pretty much flat throughout due to a combination of the dark picture and conversion process. This is a dire production that does nothing for the format and nothing for horror films in general. The PG-13 (15) rating should give some indication that this was destined for the bin. It is and it should stay there.