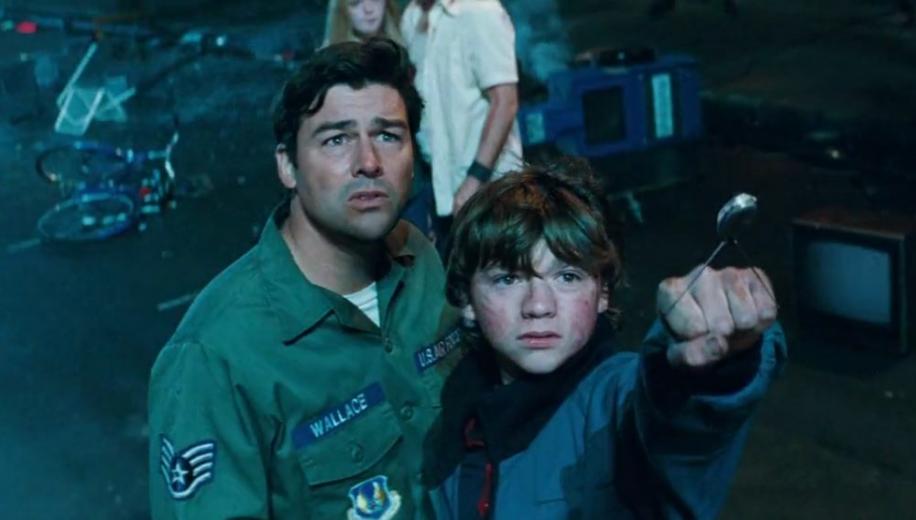 As you’d expect of a very recent movie, there’s no dirt, dust or tram lines to spoil the pristine image. Colour is strong – particularly so in the orange/yellow of explosions and skin tones have a very healthy hue. Contrast is very good throughout and we are presented with good solid blacks in the night shots – which constitute about 80% (maybe more) of the movie. Detail is very good, with skin pores being noticeable in close ups and the texture of material stands out well. Shadow detail is also well resolved, which helps with the tension. There’s an impressive use of depth of field in the movie which helps foreground objects stand out from the background – and this effect hasn’t been diluted by the transfer. Larry Fong’s fluid camerawork is a pleasure to behold and there’s nothing negative to report. In short, this is a very good looking High Def image.

The audio on ‘Super 8’ comes in a Dolby TrueHD 7.1 surround mix which for the first 20 minutes is nothing to write home about – and then the train crash scene comes along. All 8 speakers come alive with the sound of crunching, clanking, thudding and explosions. The only other time I’ve heard something so dynamic, was in the opening scene of ‘True Lies’ which for a long time was the demo material of choice when Dolby Digital was the sound format of the day. You might want to wait until the neighbours are out for the evening before you watch ‘Super 8’.

After the train crash, which will have you ducking for cover, the surround effects keep you on your toes with hints of a creature in the undergrowth. The subwoofer plays a large part in describing fear and impending doom. Helicopters fly overhead and directional dialogue impresses with its clarity. This is a pretty stunning mix. Just move anything breakable from the room first.

Audio Commentary - Director J.J. Abrams gets together with his two pals, cinematographer Larry Fong and producer Bryan Burk to try to put us all to sleep with a very dry commentary that is almost devoid of amusing anecdotes. Steven Spielberg had the sense to avoid taking part in this train wreck of a comm. track (but he doesn’t seem to do any at all). Putting that aside we do get a lot of technical detail surrounding the shooting of scenes, some discussion of which scenes were shot on the Red camera system and whether they were shot on location or in the studio. Drying paint has never seemed so interesting.

Featurettes (HD, Total 1 Hr 37 mins) - This collection of featurettes can be played by hitting the ‘Play All’ button and watching over 90 minutes worth of ‘Making of’ doco, but they break down into the following individual titles:

The Dream Behind Super 8 - JJ Abrams and Larry Fong tell us of their love for making their own Super 8 home movies and we see some clips from their early ‘productions’.

The Search for New Faces - This featurette deals with the casting process and we hear of the hard work and hundreds of auditions that went into finding the two new young stars of the movie.

Meet Joel Courtney - Young Mr Courtney confides in us about his dreams of movie stardom as we follow him around the sets, the workshops and catering trucks. He’s very natural and not the typical precocious Hollywood kid.

The Visitor Lives - This short focuses on the visual effects work and we hear of the different concepts that existed in the heads of both Spielberg and Abrams early on. The guys from ILM chip in with the practical aspects too.

Scoring Super 8 - Yup, it’s Michael Giachinno exhibiting his work flow with Abrams & Spielberg chiming in with their thoughts on the music.

Do You Believe in Magic - We hear of Larry Fong’s love of Magic tricks (handy in case this cameraman lark doesn’t pan out) and we even see him fooling visitor Tom Cruise with a card trick on set.

The 8mm Revolution - This is a nostalgic look at the home movie format of yesteryear and it compares the tiny bootlace to 16mm and 35mm to help explain it to those of the digital video age.

Deleted scenes (HD, 13 mins) - Here, for our delectation, we have 14 deleted scenes. Most are merely extensions of scenes used in the final film and you can see why they were cut as they generally contribute nothing to the story, other than to extend the running time.

Deconstructing the Train Crash (HD, interactive feature) - Rather than give us a decent chunky doco, what we get is a fairly unfulfilling interactive feature of indeterminate length based around a railway line diagram. I was reminded of a map of the London Underground where you click on a small icon and it opens an area of interest with interviews, Special Effects tests, storyboards and production notes about the sequence. It’s someone trying to be too clever. Keep It Simple Stupid - a mnemonic from the days of Super 8, pertaining to scriptwriting.

Taken from a very recent source it’s no surprise that the colour, contrast, depth of blacks and shadow detail are all superb. The fluid style of Larry Fong’s photography is impressive too.

The Dolby TrueHD 7.1 surround track is very dynamic with clear directional dialogue. It also conveys the most immersive train crash that puts you in among the hurtling carriages and falling metalwork. It’s a wow!

The bonus features include a soporific commentary track and shovel loads of mini featurettes for production buffs.

As a movie, it’s extremely well made with first rate performances from a predominantly young cast in a tale of a group of youthful film makers who witness a horrific train crash where ‘something military’ may or may not have been released on a small town. It’s involving, scary and superb. Not to be missed.