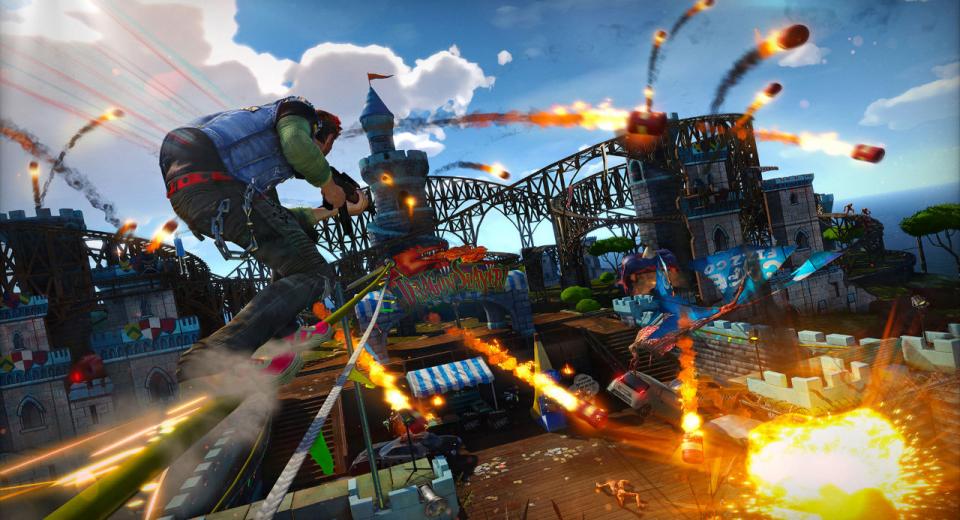 If ever there was a make or break moment for a studio this is it. Sunset Overdrive from Insomniac Games stands at the forefront of Microsoft's line up for 2014, thier only exclusive brand new IP for the Xbox One. For the studio it's their second swing at a new IP outside of the Ratchet and Clank or Resistance franchises since the poorly received FUSE. In an admirable show of character they appear to have taken the lessons of their recent failings on the chin, after chickening out and watering down the vibrant and interesting concept of Overstrike into the far too generic third person shooter FUSE eventually became, they have seemingly doubled down on the attitude and art style which initially piqued our interest all those years ago.

Sunset City is absolutely bursting with colour; full of bright neon rails and glowing greenery. If you told me the colour grey didn't actually exist in Sunset City I might just believe you. If you told me the colour grey didn't actually exist in Sunset City I might just believe you.

The dense environment isn't just there for show though; it feeds directly into the traversal system that makes Sunset Overdrive more than your average third person open world shooter. Cover is not a concept you need to worry about, if you're doing it right you'll be moving so much that enemies won't have much of a chance to get a bead on you. Almost every element of the environment allows for some form of movement, whether it's grinding on the web of rails above the city, wall running on any flat surface or bouncing off almost anything on the ground.

At first the various ways you can interact with the environment can seem daunting, with almost too many options to consider, often leaving you hitting the ground in frustration as you try to juggle controls of movement whilst aiming and shooting. After a short period though things start to make sense and the ability to create elaborate chains of movements clicks into place and becomes second nature.

It's then that you can start experimenting with all the other elements of combat such as the suite of typically ridiculous weapons that the studio is so known for conceiving. The phallic Flaming Compensator which sets enemies on fire, a Roman Candle gun that fires a hail of fireworks and the High Fidelity which bounces vinyl records between enemies for ever increasing damage. These and more have specific strengths and weaknesses which might be suited to different enemies or situations, with the Overdrive infested mutants susceptible to different weapons than armoured humans or robots might be.

Adding a multiplier to the variety is the Amps system which is a series of special abilities which can be applied to several different aspects of the gameplay. Amps are enabled depending on how much you fill your style meter. You fill up your style meter by chaining kills, grinds, jumps and wall runs into increasingly longer combos. The more you move and chain together kills the more powers you enable. Each amp is seemingly more insane than the last. Hero amps are the first to unlock at style level one, granting you the option of a mildly useful ability such as knocking enemies over when you dodge an attack. Level two brings in Weapon amps which range from increased damage while grinding to increasing the probability that a kill with a weapon will set off a nuclear blast, while different melee amps augment your attacks with fireballs and shock waves. Finally, style level 3 tips things over the edge by allowing powers such as random lightning strikes from the sky and leaving pillars of fire in your wake. Each amp is seemingly more insane than the last

Love it or Hate it?

It's all deliciously over the top, with a never ending stream of enemies that populate the world and a constant stream of effects bursting from almost every move you make, it can be very enjoyable seeing just how much chaos you can create. Insomniac have done a notably good job ensuring that the frame rate holds steady despite the open world sandbox and the sheer amount of action on the screen at any given moment.

You're given plenty of opportunity to exercise your abilities with the usual selection of side missions and challenges which have you testing your skills with the traversal system, tearing up the city with different weapons for a variety of reasons and collecting different components around the city which are used to unlock amps and upgrade your character.

The campaign missions are a well paced 10 hour ride which will introduce you to the wacky world and its crazy characters throughout. The cut of Sunset Overdrive's jib is truly Marmite material. It's constantly breaks the fourth wall, looking and commenting into the camera, making fun of gameplay mechanics and systems within the world, and - if you choose not to toggle the gore or vulgarity filters - a healthy dose of profanity. Personally I felt it hit more than it missed and simply benefited greatly from not taking itself too seriously. Missions were frequently varied and the characters and dialogue were often funny, while the slow drip of weapons, amps and upgrades made sure I was always eager to jump back in and test the next crazy unlock. The cut of Sunset Overdrive's jib is truly Marmite material
There are online options to explore with an eight player co-op Chaos mode which allows you to compete for rewards with and against other players in the various challenges voted for by the group. You then move on to defend against hordes of enemies using and combining your amps and traps which results in a spectacularly insane display of effects and powers as multiple characters fly around the environment causing mayhem. Rewards gained online can also be bought back into single player allowing you to constantly improve your character regardless of which mode you participate in.

Did you even play Jet Set Radio?

Sunset Overdrive feels liberating in many ways; from the ridiculous character options allowing hilariously freakish combinations, to the tongue-in-cheek fun offered by the dynamic combat in a vibrant world. Sunset Overdrive just wants take you back to a time when games were intended to be fun and not hyper realistic versions of depressing real world situations. Where the gameplay is addictive and the story just tries to make you laugh instead of contemplate your existence.

After misfiring on their first independent outing, Insomniac have clearly learned their lesson by sticking to their ridiculous guns and leveraging their greatest creative strengths to deliver exactly what the studio behind the game and the gamers sat in front of it needed.