By 1994 Jean-Claude Van Damme was at the height of his success in Hollywood. 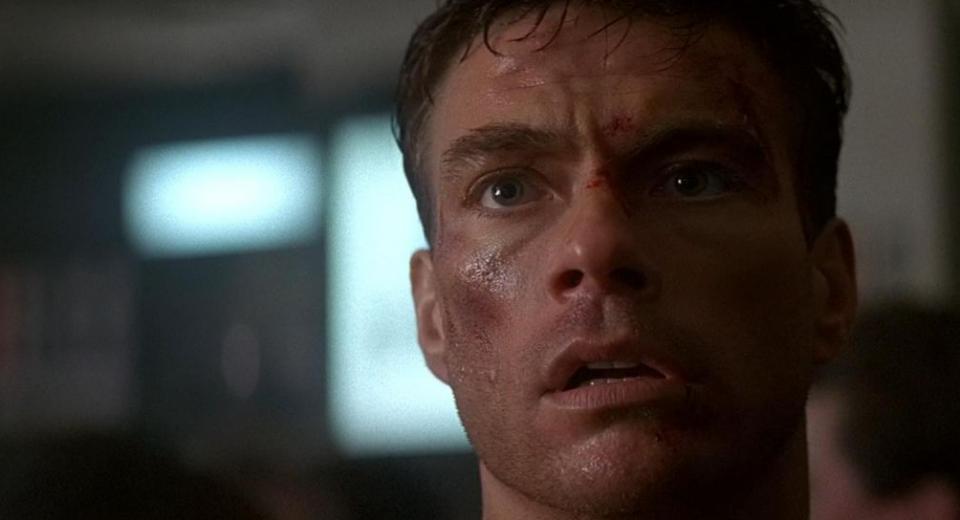 Sudden Death comes to UK shores with a Region Free Blu-ray Disc that offers up a 1080p High Definition video presentation in the movie's original theatrical aspect ratio of 2.4:1 widescreen. Whilst far from demo material this is still easily the best that the modestly-budgeted 90s actioner has ever looked and easily warrants an upgrade over the shoddy outdated DVD predecessors. Detail is good - but not great - affording some nice skin textures, clothing weaves and, occasionally, excellent background detail, so much so that you can just about make out the cardboard cutout 'extras' that helped populate the arena. There's no overt excess DNR application, and the grain level appears to be intact, although a couple of shots do betray what looks to be a hint of edge enhancement, and there are some softer sequences too. Nothing to worry about really, though, and its most likely mostly the way the feature was shot. The colour scheme is reasonably broad, from the rich skin tones to the players' outfits, and the explosions provide welcome blossoms of yellows, oranges and reds. Black levels are pretty impressive too, allowing for some suitably claustrophobic corridor sequences. As stated, you're not looking a demo material here, but it does a good enough job with the material to leave fans able to justify an upgrade.

The accompanying DTS-HD 5.1 Master Audio track also delivers a welcome solid rendition of the aural material, again not really reaching anywhere near demo heights but still delivering the feature in the best way it likely will ever sound. Dialogue comes across clearly and coherently throughout the piece, understandably restricted to the fronts and centre channels. The score is effective enough, but also pretty forgettably generic, although it does give the rears and LFE channel a little more input. Effects are myriad, ranging from a variety of different weapon noises - commonly silenced but also including a couple of RPGs and a few thundering explosions to boot. Of course the strongest, most potent atmosphere is generated within the arena, and thankfully that is where we spend the majority of our time. It won't blow your house down, but this is a pretty solid accompaniment for the film.

NONE. No surprise, but disappointing nonetheless.

Thanks to the best efforts of Director Peter Hyams, a peak-of-his-celebrity-status Van Damme and the ever-watchable scenery-chewing Powers Boothe, as well as the unusual location and the cleverly tweaked Die-Hard-On-A... formula used for the premise, Sudden Death remains solid b-movie action all the way. As a fan of action icons of the 80s and 90s - in particular, Van Damme, of course - it is oftentimes thrilling and innovative, whilst never less than entertaining. It's not necessarily up to the standards of, say, the first few Die Hard flicks, or even Van Damme's own Hard Target, but for those who still get a kick out of second generation Die Hard cousins - like Under Siege 2 - Sudden Death will be right up your street.

On Region Free UK Blu-ray Universal haven't quite done the stellar job they did with Hard Target, which was released simultaneously but they've done pretty damn well considering the film's relatively small budget, low-key style, and age. Video and audio are solid, at times good, but the complete lack of extras isn't exactly going to be persuasive. Still, it's an easy upgrade over the, frankly, terrible preceding DVD releases, and fans will find it a no-brainer, pun intended. It also looks to be the uncut variation, with a little more chicken-bone-in-neck for your viewing pleasure. Enjoy.