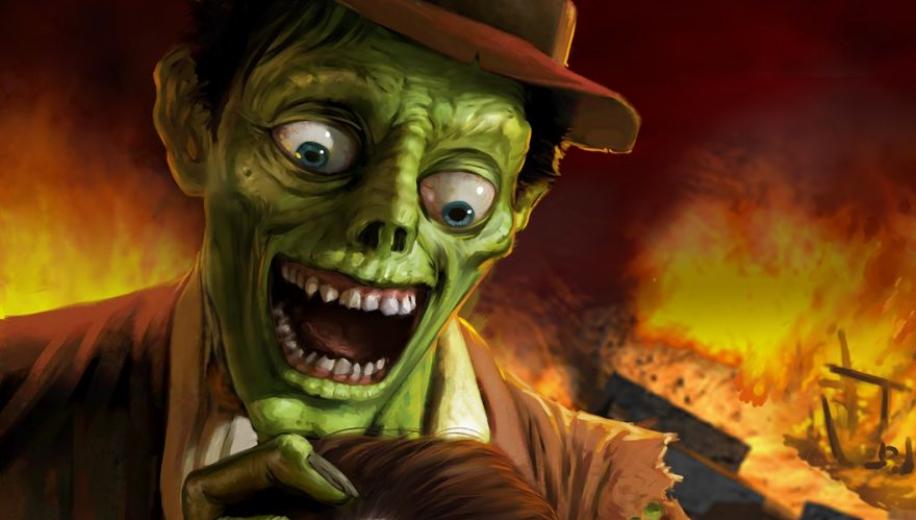 Much like some of us might dread looking back on our high school photos, comparing old videogames to the modern marketplace rarely bodes well for the game in question. However, there are some games that we keep a hazy nostalgic hold onto and are happy to return to, even when its best days are well behind it. For those whose gaming memories date back to 2005, Stubbs the Zombie (In Rebel Without a Pulse, to complete the full title) could well be a prime example – which makes this low-budget port both extremely welcome and a sadly missed opportunity. It’s welcome because Stubbs was, and arguably still is, a great game. Not great in terms of quality, certainly not on the level that the likes of God of War and Resident Evil 4 delivered back in 2005, but more that it echoed the sense of fun and silliness that the gaming community was growing to embrace – that same year also saw the release of TimeSplitters: Future Perfect and Destroy All Humans, for example (the latter getting a recent makeover).

It’s also welcome because subsequent upgrades for the likes of the Xbox 360 and PC were rife with technical issues, causing the game to be pulled years ago, and with limited physical copies around the chances of anyone being able to replay the game these days were slim… until now. We should also point out that although this digital-only release is being flagged up for the PS4 and Xbox One (along with Switch and PC), backwards compatibility means Stubbs is equally playable on the PS5 and Xbox Series S/X.

Much like Destroy All Humans, a large part of Stubbs’ appeal came from its concept rather than the execution"

Those newer consoles won’t make any difference, though, as this is not a remake, nor is it a remaster or any other kind of general improvement over the original. Instead it’s essentially the exact same game as it was more than 15 years ago, save for a few tweaks to suit our new-fangled controllers and widescreen TVs, plus the obligatory achievements/trophies. Unsurprisingly, this does mean that Stubbs The Zombie really does show its age, and the undead don’t exactly age well at the best of times, which does throw up some obvious issues for seasoned gamers trying to relive the game’s glory days or newcomers forced to compare a low-budget B-movie videogame from 2005 with today’s triple-A blockbusters.

Much like Destroy All Humans, a large part of Stubbs’ appeal came from its concept rather than the execution. As opposed to the routine slaughter of the living dead, you get to play as the titular zombie and feast on the brains of a beautifully pastiched 1950’s sci-fi America, complete with hovercars and talking robots (including a Gasbot that takes petrol pumping literally). It’s very much your typical story of boy meets girl, girl’s dad kills boy and buries him a shallow grave, only for the boy to be resurrected 20 years later when a giant shopping mall is built on his not-so-final resting place, before stumbling off to lead an undead apocalypse.

At its core, Stubbs the Zombie was a light-hearted spin on Cold War communism fears that never tried to take itself seriously. Admittedly some of the fart jokes and low-brow humour (Knobb Cheese Farm anyone?) might seem a little puerile for a slightly older generation of gamers; although on the flipside it could also be a way to get your kids to take an interest in a game that makes Minecraft’s visual look positively cutting-edge. That is if you also don’t mind your kids chewing on human brains or pulling out their insides to use as grenades (it is an 18-rated game)… In 2021 terms, the gameplay seems almost refreshingly simple. You have one basic melee attack, with which to weaken an enemy before sinking your rotten teeth into their skull, or ripping off their arm to use a club. Over a fairly short space of time you’ll unlock the aforementioned gut grenade, along with a disorienting burst of flatulence and a couple of detachable limbs – with your head doubling up an explosive bowling ball and a hand that can be used to scout ahead and also to possess humans (giving you access to whatever weapons they might be holding for a short while). What’s lacking in variety is just about made up for by the inherent ridiculousness of it all!

Without worrying about finding collectibles, unlocking upgrades or anything else, Stubbs still holds up pretty well as a fun-filled rampage, even if the game’s limitations and short running time will no doubt count against it (maybe 6-7 hours, with a speed run achievement for rushing through it in under two). Perhaps the best feature is that your fallen enemies will rise up as undead allies, and a large part of the fun is in building up a horde of AI ghouls with zero sense of self-preservation to do a lot of the dirty work for you. At one point we took a wrong turn and returned to find a few dead guys we’d left on the ground had grown into a sizeable legion that had already wiped out most of the enemies in the next section – we say ‘sizeable’, back in 2005 the tech wasn’t exactly up to Dead Rising levels (that took until 2006!). Overall, the gameplay does hold up for the most part and it’s still a lot of fun to steer Stubbs on his steady stream of carnage through the usual host of spoofs and stereotypes – from dumb jocks to mad scientists, belligerent military personnel and a memorable dance off with a police chief. Seriously! If you don’t remember the original, the Simon Says-style dance-off remains as brilliant as it is annoyingly tricky to complete. Plus there’s the option for two-player couch co-op if you wanted to invite a friend over for dinner, adding a little extra life to its otherwise limited replay value.

Even back in 2005, Stubbs’ visuals were hardly a high point, so as long as you keep your expectations low then you won’t be too disappointed. In fairness, things don’t look as bad as we’d feared they might, even if we’re talking about 720p at a time when 4K is now the norm. While the original was launched in 480p and a 4:3 ratio, with the option for the improved ‘letterbox’ format, one of the few upgrades in this port sees “modern resolution support” with up to 60fps, basically doing the job of widescreen PC mods we’ve seen created for the game over the years.

15 years ago, open 3D worlds were quite the thing, and, at the time, Stubbs did a decent job in offering up a snapshot into its 1950s backdrop, adding in the likes of an industrialised dam, laboratory complex and other paint-by-numbers settings from the standard game developer’s handbook. It’s worth bearing in mind that Stubbs was built using the original Halo: Combat Evolved engine, so there are some solid foundations there – even if Halo came out four years before and still looks better. Through today’s gaming eyes (can we call it 2020 vision?), what’s probably more apparent is what’s missing – mostly in terms of textures and any real attention to detail. Many key locations are little more than bland exteriors with a coloured sign slapped on the front, with surrounding buildings and ground surfaces making plentiful use of the copy and paste function. The interiors are also almost Doom-like in their 3D simplicity, all right angles and filled with only the most fundamental features and a few generic odds and ends as mere tokens of decoration.

Likewise, though Stubbs himself still looks pretty good, a lot of the animations now look a little awkward and some of the cutscenes (which haven’t been upgraded and still drop out to a framed letterbox image), along with the transitions into them, are especially clunky. That said, back in 2005 the game was never really judged on its visuals and our thinking is much the same today – as long as you can look past the sparse locations and frequently bland palette and focus on the gameplay instead.

An absolute high point of the original title, upon release Stubbs boasted an excellent soundtrack of classic songs from the era re-recorded by modern artists, including the likes of The Dandy Warhols and The Flaming Lips. Almost every track hit the spot, notably Oranger’s "Mr Sandman" and Ben Kweller’s "Lollipop", and it helped to both embed the setting and also brilliantly stylise it for the (then) modern gamer. Replaying the game all these years later and with that soundtrack still rattling around in our head, what’s perhaps surprising is that it wasn’t (or hasn’t) been used more in the game. The dance-off sequence obviously stands out but with less than half the soundtrack roster used in the game and little in the way of ongoing background music for large sequences it’s just a shame we couldn’t hear more of it, and more often.

By modern standards this does leave the audio feeling rather erratic and disjointed, but there’s still an impressive array of zombie moans and groans, plus a decent amount of fun dialogue to keep things lively (even if some of the incidental reactions do get repeated a lot). But, of course, this still being a relatively low-budget 15-year-old game, don’t expect anything that would push the capacity of your mobile phone, let alone your Sonos soundbar or 7.1 audio system.

As little more than a port of a 2005 game, Stubbs the Zombie was never going to look great when compared against more recent releases but it’s still a lot of fun and we probably enjoyed his latest resurrection more than the score might reflect. Viewed from a retro or indie perspective the simplistic gameplay and playful concept still holds up pretty well, and those with fond memories of the original won’t find them too badly tarnished with this brain-chomping trip down memory lane, though you may well be left wishing it was so much more.

Newcomers may be put off by the game’s obvious 15-year-old limitations or find the humour equally dated, depending on your penchant for fart jokes, and certainly from a technical perspective it was never going to get better with age. Regardless, at the very least this puts a cult classic back into the public domain and so this remains a very welcome release, even if the years haven’t been entirely kind to our favourite chain-smoking zombie. And hopefully this will also act as a feeler for a publisher perhaps thinking of a full reboot in the near future, or maybe, just maybe, that long awaited sequel which died when the original developer folded back in 2014 will finally rise up from the grave.