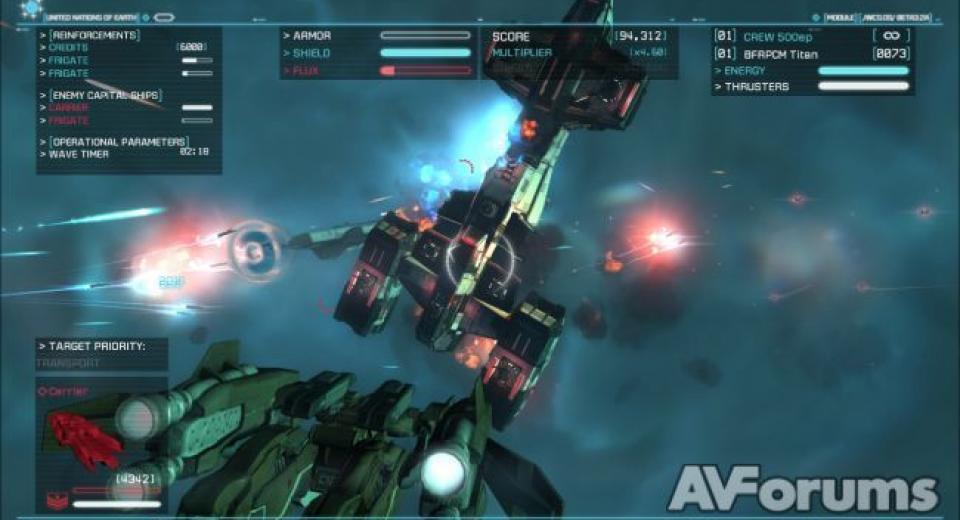 Strike Suit Infinity is a standalone expansion to Strike Suit Zero, Born Ready Games’ Kickstarter-funded attempt to resurrect the X-Wing style of space shooter that’s been out of fashion for most of the century.

The original was a promising but deeply flawed experience: a wholly derivative story, unimaginative and frustrating mission types, and an unreasonably punishing checkpoint system. So it’s sensible that with Infinity Born Ready have chosen to strip back the experience to what Zero did best: spectacular space combat. With any suggestion of a story removed, Infinity is a straightforward wave-based score-chaser. It features 18 rounds of increasing difficulty that are unlocked sequentially but once available can be replayed at any time. Online leaderboards provide the competitive with something to aim at, but for most reaching the higher echelons will prove nigh-impossible. Infinity may not feel as unfair as its predecessor, but it’s no less difficult.

I can’t stress enough how enjoyable the combat is. The distinguishing feature is the Strike Suit itself, which can transform from a jet/spacecraft into a slower but more manoeuvrable and powerful mech. The ability to transform into the mech is dependent on a ‘flux’ meter, which builds up when you or your allies destroy enemy ships. Flux is depleted each time you shoot.

When in Strike Suit mode, holding the shift key auto-targets the next enemy, meaning you can swivel round and chain kill after kill, all counting towards your multiplier and, ultimately, your all-important points tally.

There are three Strike Suits available, with the Marauder being my favourite. Its weapon in Strike Suit mode destroys most enemies with a single shot, although there’s an extended cooldown until it can be used again.

Taking on one of the larger enemy ships - like the huge multi-turreted Cruisers - has a real Star Wars feel about it, once you become comfortable with the controls. It's commonplace to go barelling in all guns blazing before transforming into the mech and steadily blasting at the enemy's defences, then turning back into jet mode to tear away and recharge your shields. Between rounds you have the option of choosing from a range of guns and missiles for your ship. There are a few interesting options in there, particularly the 'swarm' missiles: with those, the longer you hold the right mouse button, the more missiles you fire when you eventually release. I tend to choose them even though there are better weapons available, just because of how effectively dozens of projectiles adds to the chaos of the scene.

And chaotic it frequently is, especially as the game progresses and you earn additional credits. Prior to each round starting, you are given the opportunity to ‘buy in’ other ships to support you. The problem here is that although the game tries to help you make the right decision, it’s never quite clear why you would choose one class of ship over another. This muddle is further compounded by the option to upgrade your support ships’ pilots, which is both expensive and unexplained.

Possibly one of the most significant criticisms of the game as a whole is the lack of effort put into explaining what’s going on. There’s a tutorial available, which covers some basic concepts and controls but it doesn’t go nearly far enough. I’d say I was about two hours in before the gameplay really began to click for me. I imagine many will give up before that point. Infinity’s presentation is top-notch, especially for such a cheap title. The space vistas are stunning and the model design of the ships is slick and elegant. The colouring is simple but effective: allies glow blue, enemies red - there’s never any doubt or confusion even in the heat of battle when all hell is breaking loose.

The soundtrack is a corker too, particularly in the final wave of each round. It’s lifted straight from Strike Suit Zero and it’s a wonderful soaring electronic/vocal piece that really ratchets up the adrenaline.

All told, at just £4.99, you can’t really go too far wrong with Infinity, especially if you’re a fan of the old space combat classics. I’d be lying if I said I was drawn into the leaderboards, or if I said they’d got the difficulty curve right, but I chose to stick with it and was rewarded for doing so.

Initially, Infinity seemed like just a fun distraction, but with a little perseverance it quickly morphed into a dip in/out regular in my Steam library. Well worth your time to check it out.

The fact is, Strike Suit Infinity is cheaper and better than the original. For less than a fiver it offers great arcade-style space combat action in a bite-size form: TIE Fighter for the portable games generation. The incomplete tutorial and harsh difficulty may put some off, but those who stick with it will be well rewarded for their efforts.