Hammy, silly and devoid of much by way of quality, Stolen asks a little too much of us in terms of forgiveness. 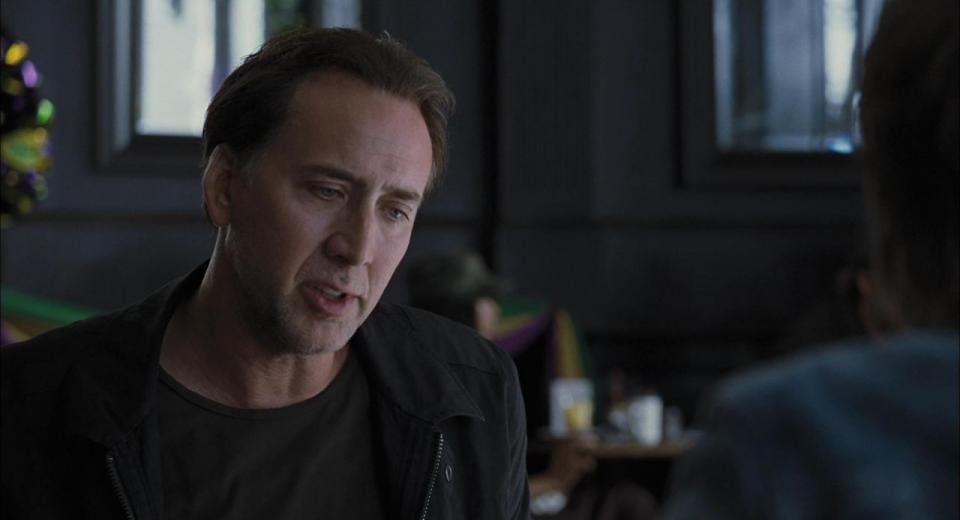 The image is reasonably clear and crisp. Outlines are strong and show no signes of aliasing or edge enhancement. It's not perfect, with some slight degradation in sharpness caused by the grain structure, but only occassionally a problem. Certainly nothing to moan too much about from my point of view, I quite like a nice grain to the image. Interestingly, it seems that the grain structure's effects are tempered depending on the lighting of the scene, with darker lit scenes showing what appears to be a much sharper image than brightly lit ones. On the whole I would classify this area as inconsistent.

Skin tones seem fair, but a little shy of natural. Everyone looks either pale and pasty in bright scenes, or slightly blueish green in darker scenes. This is obviously a grading decision taken by the director, so it's only fair to call it intentional. Blacks aren't what you'd call brilliant, at times erring more on the side of deep grey than black, and there's also some very mild banding present in the darker scenes. Fine object detail is fair, and shadow detail is on a par.

I have to say that, colour-wise, some of the New Orleans scenes look incredibly vibrant, the colour palette being handled extremely well in wider crowd scenes. I was impressed by these shots more than any others in the movie. The 5.1 DTS-HD MA presentation is, in contrast to what I'm led to believe about the US version's Dolby TrueHD audio presentation, a little flat. There's nothing "wrong" with it, per se, but for an action flick, it's particularly underwhelming.

Dialogue is clear and precise, occupying the centre channel only. Slight caveat that at times you might have to strain to hear Cage's woofy lines. The music is produced well and occupies the front left and right predominantly, with the occassional foray to the rears for an all encomopassing sound. Sadly the soundtrack is one of the weakest elements of the movie, so despite this great separation achieved between the dialogue and music, it doesn't half grate on you.

Sound effects are decent enough on the whole, with foley being carefully observed for the most part, though I did find the stereo punching sounds slightly out of place as I would have expected them to be more central according to the listener position. One thing I did find a little strange was the big set pieces where the audio occassionally has a little distortion on the effects. Such as the big car crash when Cage is in the back of the police car in downtown new orleans - the crash sounds, though really well positioned and flurrying around you in the surround array nicely, had a little too much crunch to them to be comfortable. There's also some instances of this in the final showdown scene with fire and slapping sound effects feeling slightly odd at times.

On the whole it's perfectly passable as far as audio presentations go, and is unlikely to dissapoint, despite the fact it's unlikely to impress too much either. Behind the Scenes of Stolen

Exactly what it says on the tin - 7 minutes of behind the scenes action with Cage being Cage and other actors talking about Cage being brilliant. I suppose they had to do that as he was probably just off camera.
The Cast and Crew of Stolen Hammy, silly and devoid of much by way of quality, Stolen asks a little too much of us in terms of forgiveness. A lot of movies of this ilk ask little of us and we're prepaired to accept that and enjoy the romp, but here the ask is just too big. By the end of the movie, if the interminable, unrelenting main theme in the score hasn't done you in, Nicholas Cage's apathy for acting most certainly will. It's supposed to be a no-brainer action flick, that sadly fails to succeed in even that, falling just short of the acceptible mark.

The package itself has a fair video presentation and an audio presentation that, if you can look past the bad computer game-esque musical score, isn't awful - coupled with a pretty poor showing on the extras front. All in all, this is not a package that I could wholeheartedly recommend to any self respecting AV enthusiast, but if your thing is throw-away action nonsense that's confused as to whether it's trying to be funny without laughs, or serious with a few smirks then go for it!