Do not disturb the family 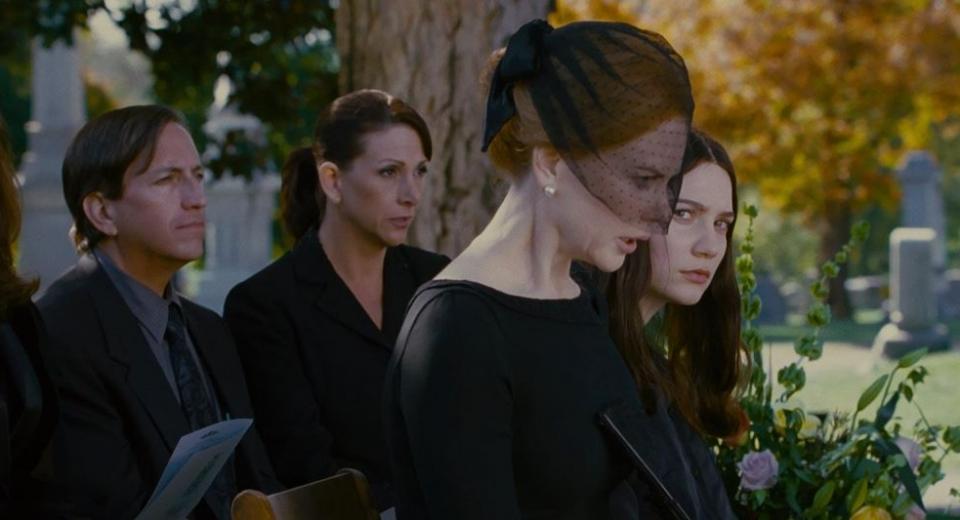 A curious little psychological thriller, the first Western feature film from acclaimed Korean Director Park "Oldboy" Chan-Wook is part coming-of-age family drama and part gothic murder mystery, and is likely completely unlike anything you will ever have seen before.

Whether or not it quite agrees with you is a different question entirely, however. Some may happily revel in the intensity of the piece, and curiously lap up its atypical stylisation; others may well feel that the man behind the superior Vengeance Trilogy has not been quite so successful in his transition to English-language features; that the film simply tries too hard; and that something has been lost in translation.

Certainly, over time, it will likely go down as something of an unexpected curio and for those prepared to take a leap of faith into distinctive, uncharted territories, the intoxicating ride may well be worth it.

The story follows a death in the Stoker family. After her husband is killed in tragic circumstances, Evelyn Stoker is even more emotionally disjointed than she was before. However their teenage daughter, India, is completely at a loss as to how to deal with the huge void that has now appeared in her life - she was so close to her father, and now she feels utterly alone. When estranged Uncle Charlie reappears on the scene, however, things are totally shaken up in the household; his mysterious charms drawing the attention of both of the women. But why is Charlie back now, all of a sudden, and what precisely does he want from them?

"Sometimes you need to do something bad to stop yourself from doing something worse."

Remember Wentworth Miller? The name’s distinctive enough, but you’d be forgiven for not quite being able to place it. He was one of the leads in the vacuous Prison Break TV series, as well as Chris Redfield in Resident Evil: Afterlife; a dull thud of an actor who gives wood a bad name. But he also wrote the screenplay for Stoker – and it is an extremely impressive debut effort. You may not care what he does acting-wise in the future, but it would be foolish to ignore what he writes next.

Supposedly taking the name ‘Stoker’ not from good ol’ Bram himself, but instead to mean a person who ‘stokes a fire’ – in this case the enigmatic Uncle Charlie, who stirs up the household in the story – there is no denying the vampiric influences in the tale. Whilst there are certainly no vampires, several characters display traits that are, at the very least, preternatural, if not outright supernatural, and Uncle Charlie himself certainly has the allure and intangible power of Dracula, in particular when it comes to the art of seduction.

Aside from the unusual characters, however, Miller has written a tale that makes for an unusual blend of tense Hitchcockian mystery and observant family drama – so atypical is its telling, the coming-of-age storyline involving the central character of India could almost go unnoticed amidst the rest of the story. Similarly the horror elements defy convention, with suitably distracting – again Hitchcockian – mechanics used very effectively to heighten the tension. Of course it’s no surprise that the premise clearly borrows from Hitchcock’s classic Shadow of a Doubt, also about a mysterious Uncle Charlie returning home to shake things up for his teenage niece; Miller has openly admitted that this was the ‘jumping off’ point for his story, however different in the tone and the direction that the story ultimately takes.

You can certainly see why Director Park Chan-Wook would be drawn to this particular tale; it’s right up his street. The whole moody mystery of the piece seems totally in-line with his oeuvre, and the latter-end twists – however contrived and maybe even predictable – will ring bells with anybody who has seen his Vengeance Trilogy. Indeed, I doubt anybody would have raised an eyebrow if his name had appeared under the writing credit, so attuned is Miller’s script to the Korean Director’s sensibilities.

In fact one has to wonder what the end result would have been like had Park taken the story and shot it in his native language, with Korean stars instead of English-speaking ones. Perhaps his Vengeance Trilogy would have been inadvertently expanded?

As it is, something was undeniably lost in translation, and what was gained in its place was a sense of overbearing style which will undoubtedly take on a Marmite quality amidst audiences. For those looking, there are some stabbing nods towards the directorial styles of numerous Western filmmakers, most notably an opening credits sequence that would not look out of place in a Steven Soderbergh film (think: Out of Sight), as well as curiously observant attention-to-the-minutiae which hints at a trio of master directors – Andrea “Fish Tank” Arnold, Paul Thomas Anderson (There Will Be Blood, The Master), and, of course, the man who probably influenced all of the others, Terrence Malick (Thin Red Line, Tree of Life). There’s a wondrous juxtaposition of nature’s atmospheric elements and close-up facial observations, with as much gleaned through reading the faces
of the characters, or gauging the reflective weather, as can be drawn directly from the story itself.

Setting the tale in an era which is almost impossible to completely place, you would be forgiven for assuming that this was some kind of period piece – its gothic nature is evident right from the start, and plays out through everything from sets to costumes, most notably in the daughter India’s strangely dated attire. Indeed were it not for the mobile phones and iPods that start popping up, the story could have easily taken place in a time long passed; a time of cotton plantations and small-town sheriffs, where the characters would almost feel more at ease.

Similarly the score defies any convention, with a jagged approach to themes and a punishing undercurrent of heartbeat-like bass which very effectively throws you off the scent, whilst also reminding you that there is clearly something dark and disturbing going on beneath the surface. It’s marvellously understated.

At times, however, Park feels like he has got far too many new toys to play with, and doesn’t quite know what to do with him. Far from as subtle as many of the aforementioned filmmakers, his style can be jarringly in-your-face, and totally at odds with what you would have expected from the man behind Oldboy, where even the most heavily stylised sequences felt totally natural to the piece. This doesn’t make it a bad film by any means, just one which may not go down all that well with his long-term fans. The future may turn things around however, as for every imperfect Broken Arrow, there’s always a Face/Off waiting just around the corner, and whilst East Asian directors are notorious for failing to quite make the transition from East to West, there’s enough going for Park’s Western debut to give you hope for what might come next.

Performance-wise, Park has selected a trio of perfectly-placed actors. Mia Wasikowska just about pulls off the young part of India Stoker, despite verging on being too old to convince as a teenager, and certainly has the ethereal mystery about her to both captivate and disturb in equal measure. The unconventionally alluring actress has swiftly made a name for herself, through strong performances in features like Jane Eyre (directed by the aforementioned Andrea Arnold) and last year’s Lawless. It will be interesting to see what she does with a role that is wildly different from those she’s picked up so far – as most of her characters are iterant variations of one another – but, in the meantime, there’s no harm in her cementing her celebrity profile with strong offerings like this.

Poor Nicole Kidman has not aged gracefully, her newly-minted sculpted porcelain look making it extremely hard for her to emote convincingly – a great shame when you consider the natural beauty she exhibited back in the pre-op stage of her career. Yet, funnily enough, this artificial look largely lends itself well to her role here as the emotionally-distant mother who struggles with such seemingly simple offerings like warmth and affection. It’s been a while since I’ve warmed to a performance from the star, but she does bring a strangely fractured vulnerability to her part here, generating sympathy for a character who you would naturally like to dismiss as freely as she does her own daughter.

The real star, though, is Matthew Goode as Uncle Charlie. Although he too doesn’t appear to have distanced himself all that far from his most noteworthy earlier roles – whether it be as the source of Colin Firth’s affections in A Single Man, or as the antagonist Ozymandias in the Zack Snyder’s impressive adaptation of Alan Moore’s stunning fable, Watchmen – he somehow channels all of those familiar traits of slick arrogance and self-assured charm into a role which utterly demands them from him. Sure, as noted, he’s not supposed to be Dracula, but, at the same time, he very much is. Suave, seductive, impeccably dressed and supremely confident – his power over others is palpably strong, creating a thick, heady atmosphere throughout.

The three also work perfectly together, dancing around one another like skilled figure-skaters; colliding with purpose and intent; exploding into emotion in marvellous and unexpected fashions. It’s all so underplayed, and yet so thick in the air that the tension is almost unbearable.

Park may have distanced himself from some of his avid followers, but he has far from betrayed them with his debut Western feature; look beneath the surface and the similarities are undeniable. Indeed, look beneath the surface and you’ll likely see the earthworms slithering over one another in a manner that would not be out of place in a David Lynch mystery. Sure, he certainly has not perfected his Western style, and he may well take a couple more features to do so, but, for those prepared to try something daringly different, this is a welcome feature. Certainly if the way of the future for Hollywood is stealing from Park’s past (I still have no idea why the once-great Spike Lee would even consider touching the masterpiece that is Oldboy), then we should forgive him any flaws and only open our arms to undeniably original features like these.

Park "Oldboy" Chan-Wook's first English-language outing is a curious dish. Fans of his Korean Vengeance Trilogy may well be somewhat disappointed by this debut feature, but there is plenty to enjoy about this intoxicating little mystery thriller which blends coming-of-age sentiments with gothic sensibilities, and wraps them all up in a psychological horror which feels like it has been crafted from a vampire-bitten Hitchcock. Intense and claustrophobic, stylish and seductive, for those who are prepared to take a leap of faith into distinctive, uncharted territories, the unquestionably different voyage may well be worth it.