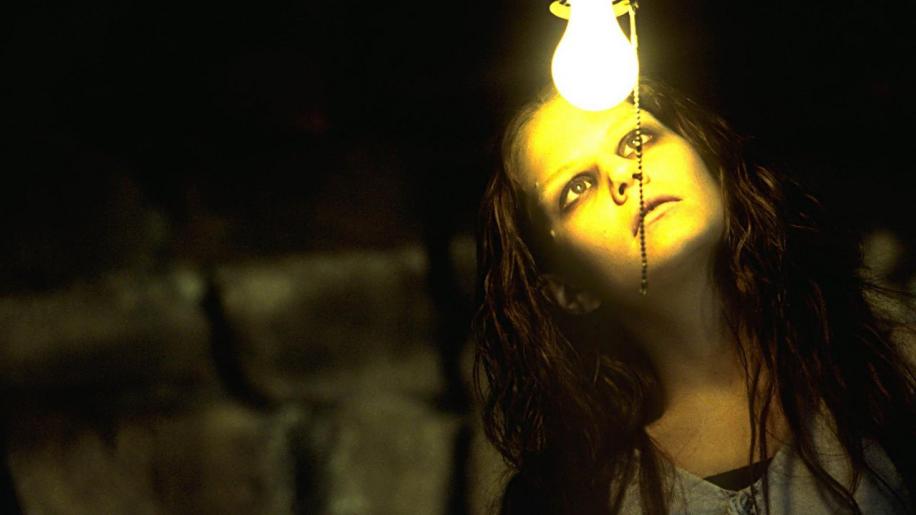 Picture quality is very clean and pure. During some of the directors commentary, it becomes clear that at least two scenes have been digitally cleaned up for the home audience and it looks like the rest of the movie has, too. As a horror movie, there are a lot of shadowy scenes and these are handled very well indeed. There is no interference, blur or grain, here, just smooth finely detailed pictures. If there is one failing it is that certain colours seem to be too present in some scenes. Look at the part where Tom is in the back garden with his shirt off. The rest of the picture is cool, but the shirtless Tom looks too red in comparison. There is one good soundtrack on Echoes, but there is one very good one too. If the Dolby Digital soundtrack on Echoes was the only track, you would still be very pleased with the results. The DTS track, however, has a whole heap of extra stuff going on in the rear speakers. Whether this is because of the discrete encoding I am not sure, but DTS is demonstrably better. Watch a scene at the beginning of the movie where the young Jake is talking in the bathroom. In the DD track, there is a good ambience, but the DTS one is far more effective, with much more precise rear speaker presence. One thing to take note of, here, are the DVD menus. They give away some of the plot (not that you would know that without first seeing the movie) but are very well designed and more than a little freaky.

The director's commentary is one of the better ones, it being a forthright judgement of his movie and not to “...they were such fantastic actors!!!”. David Koepp reveals a lot of technical detail of why certain scenes were shot in a particular manner. He also discusses directorial devices that he used to increase tension and points out all the errors that were made, too.

Making of Stir of Echoes: Behind the Echoes is good, maintaining interest while not giving away too much of the story. Cast and crew provide their opinions on Echoes with, as close as you are going to get, honesty. This is mainly because nothing confrontational is discussed, but some of the anecdotes are unusually personal. Kevin Bacon recollects talking to the young Zachary David Cope, explaining that “...I will act a little weird sometimes...just remember, we're only pretending.” When the referred scene has finished cope solemnly turns to Kevin Bacon and says “You're quite good at this, aren't you?”

Minds Eye: Behind the Trance is a 101 on hypnotism, explaining some of the technicalities of the subject. This is an interesting documentary that, refreshingly, travels beyond the movie's scope. There are some myths and interesting facts explained such as if you do not want to be hypnotised then you can't - it's just impossible.

Sight of Spirits: Channeling the Paranormal is Ghostbusters, Panarama style. Various experts in the field of Parapsychology recount past encounters and proof of the after life. At first I thought this a spoof, thinking that it was ingenious of the DVD producers to include the feature. It is deadly (sorry) real, though, with the main interviewee explaining how he helped the police force (do police forces really rely on the paranormal to solve crime?) solve a gruesome murder. “I was talking to the mother of the victim and an image came to me: There was a couple of early twenty year olds with skinheads and tattoos driving a black van...” explains the commentator. Well, gee, ya don't say? Its not likely they were going to be a couple of pensioners in Harris Tweed driving a Morris Minor, now is it? I am not taking away the gravity of the crime, at all; clearly it was a violent abhorrent murder. Sometimes, though, these “psychics” are a little hard to take seriously. If the movie had kept it's secrets a little longer, and was a bit more edgy, then it would have been much better. As it is, the plot is nearly transparent after a certain scene and this effectively dulls the suspense. Echoes is frightening, like a cross between The Shining and Sixth Sense, but the frights don't flow as in those first two leaving you with a somewhat fragmented movie.