Steelseries' updated PC headset is put through its paces 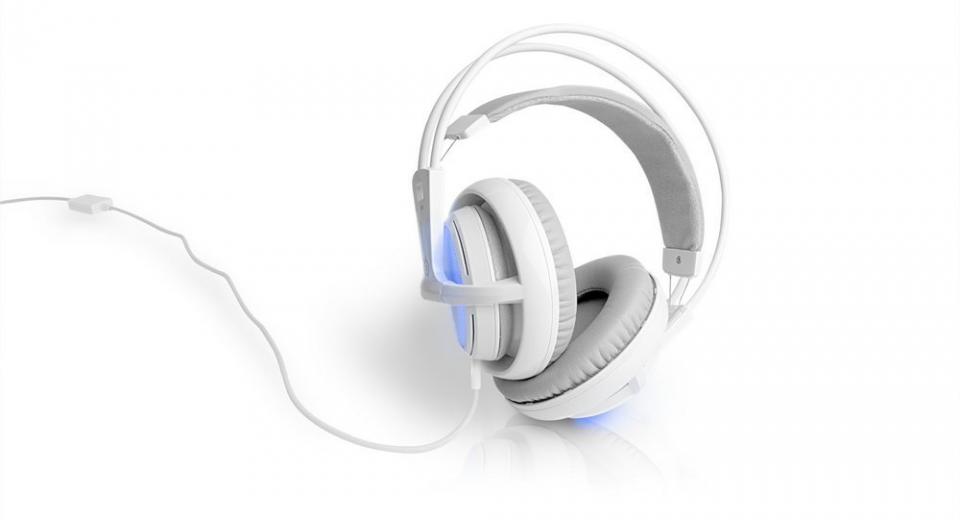 There’s something to be said for simplicity. As gamers we’re used to devices and accessories that bombard us with “features”, promising every application known to man and usually only delivering on half of them with any degree of reliability or quality. Headsets are no stranger to that compromise, with several manufacturers jumping into the increasing arms race to bundle amplifiers, adaptors for every gamepad imaginable, changeable trim, more cables than you’ll ever need and various detachable microphones and controls into one cramped box.

Of course some of those that err on the side of over-engineering are still successful products but, every now and then, it’s nice to step back and appreciate a device that concentrates on doing just one thing, and doing it better than anybody else. The SteelSeries Siberia V2 Frost Blue headset takes just such an approach.

As a company, SteelSeries is known for a singular devotion to imbuing its products with as much quality as they can achieve in their chosen area, but also to the idea that less is most definitely more in the majority of cases. This USB-driven headset won’t connect to your iPod or Smartphone, and it won’t connect to your Xbox 360, PlayStation 3 or any other device that isn’t a PC or a Mac with an available socket. It doesn’t come with discrete or faked surround sound, but instead it has its own on-board stereo sound processing to bypass the dodgy output of your motherboard. It also has a single analogue volume control on the cord, a mute button and a retractable boom mic built-in to the left earpiece and that’s all folks.

As usual however, the lack of big-box features are more than made up for in audio quality and comfort, and in the case of the Siberia, to a spectacular degree. Simply getting around the output of your motherboard is more than enough in most cases, but the Siberia pairs its built-in USB sound card with large and responsive 50mm drivers and a supremely comfortable suspended headband. The results should sound fantastic, so let's find out...

The Siberia V2 Frost Blue packaging continues the SteelSeries design trait of not offering anything that isn't strictly necessary. The box itself is a basic cardboard design with all your pertinent stats outlined on the rear, but you can also see it's not the sturdiest of structures; our's seemed to get beat up by the postman quite a bit.

Opening the front cover of the box presents you with a view of the clean lines of the headset through a plastic window, along with a couple more logo-emblazoned features and a nice marketing shot on the other side. So far, so good.

Once the contents are emptied out, you're left with the headset itself, a grey USB extender cable and a small instruction manual and SteelSeries sticker. Nothing more, nothing less. The headset itself is constructed from good-quality plastic, without any discernible noise or creaking when manipulating the earcups. There's no rotation or other fancy manoeuvrability to speak of, so what you see is what you get here. The headband is a supremely-comfortable suspended variety, with four fairly robust cables providing the support that holds it together.


On closer inspection, there's a short USB cable tethered to the left earcup of the unit, and that's your lot for connectivity. This is a PC or Mac-only unit through and through, and that fairly cheap bundled USB extension cable is necessary for anybody not sat immediately in front of their desk.


The inline controls are limited to a small plastic rectangular box with a sliding mute switch and a volume dial, whilst the pliable microphone retracts neatly into the left earcup when not in use. It's a simple and elegant solution then, with no detachable parts to go missing.

Nothing screams “2012” quite like downloading new firmware for a pair of headphones, but that’s exactly the first step you’ll likely take when connecting up the Siberia to any PC. It’s a quick and painless process to update the SteelSeries unit however, with a selection of devices included in one single package for those of you that own more of the manufacturer’s range. A pre-existing or new install of the SteelSeries Engine then picks up the headset and presents a limited range of options to configure, which basically boil down to an EQ and a selection of LED light strengths for the neon-blue glow of each earcup. After selecting volume-activated lighting (which is clearly the best choice) and tweaking the EQ to your usual preferences, there’s little else to revisit here.

Firing up the high-bitrate version of the soundtrack to Shatter (the rather excellent and oft-overlooked PlayStation 3 arcade title), it’s hard not to be blown away by the relative quality the Siberia V2 offers for the price point. Bass response, no doubt aided by those 50mm drivers, is fantastically deep and precise, whilst the mids and highs are clear and well-defined. Where some other gaming headsets give the impression of distractingly well-defined mid-levels (to aid ‘pro’ gamers in identifying the most common audible threats) and offer little in the way of configuration options to alter that effect, the Siberia EQ allows you to get around that completely to create a more well-balanced and palatable sound for everyday use.

For us, that’s a boon that translates to a much more involving experience in movies, music and even for quite a few of the games we play with regularity. The audio throughout sessions of Xcom: Enemy Unknown was suitably atmospheric and involving, and particularly in areas such as the bassy menace of a walking Muton or the metallic thud when firing at a Cyberdisc - both of which conveyed a subtle weight that wasn’t present when using other hardware. In comparison, the echoing crack of a sniper rifle in Battlefield 3 was reproduced with considerable clarity and detail - even if you do miss the surround effect as audio passes between those important front and rear channels. As far as the inline controls are concerned, the breakout box on the cable houses a fully analogue spin-wheel control for volume rather than the usual rocker-style that bumps up audio in notches, which is a welcome change. There’s little in the way of bells and whistles here though; you have that one volume control and a slightly awkward mute button (it’s a little stiff, and the plastic depresses a little too much when trying to slide it) and that’s your lot. Microphone volume and game volume have to be controlled independently in your application, which is a little fiddly in comparison to some of the other ‘premium’ solutions on the market. Overall however, that's a tradeoff we're willing to take for the improved audio quality.

The only other crucial component, the retractable microphone, is perfectly functional and of a decent quality - although on this latest generation of headsets that’s hardly a surprise. It neatly nestles back into the earcup when not in use and can be easily positioned wherever necessary, whilst the audio-cancelling properties seemed to do the trick for the most part - although a small amount of ambient noise and background talking could be heard when testing via Skype. The clarity is good for the price point, although - as ever - those of you into your podcasting might want to look at something a little more professional.

As far as construction and practicality are concerned, the white shell doesn't give the impression of too much flex or too many worryingly creaking joints as many cheaper headsets do, and despite the annoyingly short cable, the Siberia V2 is simply one of the comfiest headsets we have ever tested. The suspended headband and sturdy, light plastic construction combine with plush ear trim to create the illusion that you’re not really wearing anything. It’s that good. There are a few concerns about the durability of each of the four cables that suspend that headband, but even with some rigorous flexing they didn’t seem in too much danger of breaking loose or snapping.

The good thing about the Siberia V2 of course is that - even if the headband eventually does break after a year or two - the relatively low cost of the headset makes it fairly easy to replace. And with audio quality as brilliantly executed as this, there's every chance you'll want to do just that. The Siberia V2 might not make traditional audiophiles completely happy, but it's undoubtedly a good few steps closer to that level of performance than we're used to seeing in the gaming space. That alone makes it worthy of consideration, and as long as you're willing to sacrifice surround audio, your games will rarely sound better than this.

Taking into account the focused nature of the Siberia V2 Frost Blue and its remit to reproduce clean audio with as much depth as possible at its price point, there’s little to complain about in the package that SteelSeries has put together. Audio quality is a clear step above the majority of motherboard-based outputs, and it’s a joy to discover subtle sound effects and a level of clarity that you might have missed with other headsets. Complementing that, the bass response is warm and richly detailed, and it handled pretty much everything we threw at it with cleanliness and precision. The Siberia V2 rarely sounds blown out, even when cranking things up and testing the extreme ends of the EQ.

As you might imagine however, the lack of surround sound might be a little offputting for gamers primarily into first-person shooters or racers, but to overly criticise the headset in that regard would be unfair. There are plenty of alternatives in both the software surround and discreet surround headset market, and the aggressive price point of the Siberia V2 marks it out as different to the others in that respect. Surround simply isn’t the focus here, and there’s a potentially large market to tap into for those that just don’t care that it isn’t included. The benefits of having a comfortable headset for longer spells in front of the computer also cannot be underestimated, and the light weight and superb suspended headband mark this out as something special in this regard.

A few small quibbles about the length of the USB cable and build quality of the inline controls aside, there’s precious little to dislike here. Even if you’re not a fan of the ice white and neon blue colouring, there are a whole range of alternative schemes to choose from on the website if you fancy something different. With those positives in mind, the Siberia V2 is well worth a look if you’re in the market for a quality USB stereo headset at a hugely attractive price point.