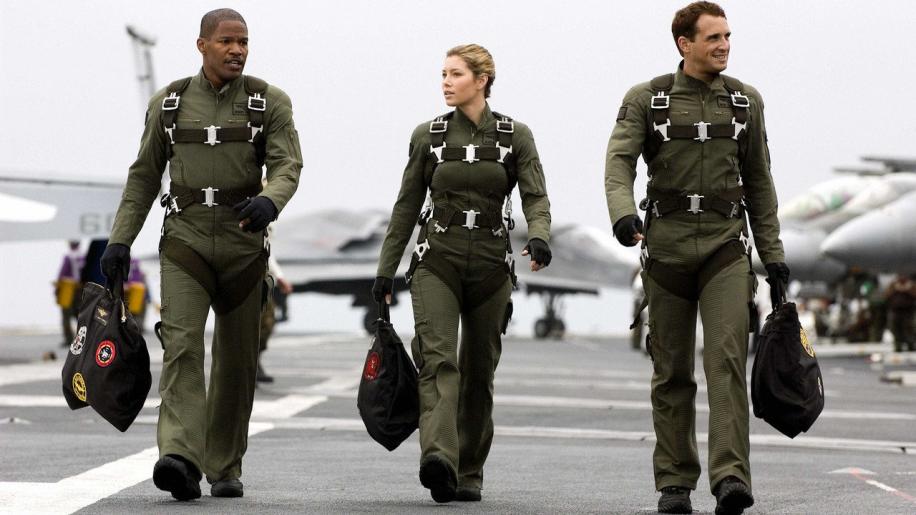 Stealth is presented in a broad 2.40:1 aspect ratio that generally looks good but is nothing particularly special. The detail is above average, with decent clarity, negligible edge enhancement but some moments of unnecessary softness (I suppose they are inherent with such an effects-based movie) and even a little light misting from time to time that could be seen as grain. The colour palette varies from location to location, with night storms, desert conflicts and green paradise idylls all looking pretty damn good. Blacks are solid and deep, allowing for good night sequences and shadowing. Overall it does the job, but for such a recent big-budget blockbuster I would have expected near-perfection. We get two solid original English language tracks for this release: in Dolby Digital 5.1 and DTS. Both are pretty powerful, offering up clear dialogue (including the AI's HAL-like voice) predominantly from the fronts and centre channels, but really coming into their own thanks to a superb soundtrack. Primarily score-driven, this BT-composed outing is simply perfect for this kind of cheesy Top Gun-esque actioner. The music dominates the surrounds, with a strong frontal bias and even a little bit of bass. Effects-wise you have come to the right place, with explosions, afterburner thrust noises and artillery fire surrounding you. The planes whoosh across your living room almost constantly and the bigger bangs really pound out of the speakers at you. Both of the main tracks are lively, potent mixes that will improve your enjoyment of the action no end.

On the first disc we get a featurette entitled The Music of Stealth, which runs at twenty-three minutes in length and looks at the score and soundtrack of the movie. Rob Cohen pops up, alongside a multitude of other crew members who talk about the musical process and we get behind the scenes footage of the orchestra and interviews with the composer BT(who is tremendous, check out the album ESCM if you want proof). I must say that the score and rock tracks perfectly suit the action and 'drama' of the proceedings and help no end with getting you swept up in the popcorn fun of it all. I'm not sure whether there is enough valuable information to justify quite such a long featurette (which is not even padded out with much final film footage) but those particularly interested in the great soundtrack might want to give it a look and at least it is not one of those fluffy four-minute jobs. We also get the Music Video 'Make a Move' by the band Incubus. It's a bit of a wuss-rock track and the video is nothing special at all but fans of the band and their music will be happy to have the addition (and it is nice to have on the DVD for completeness).

Finally on the first disc we get some previews. There are a couple of odd trailers on disc startup: for film version of the musical (I HATE musicals) Rent, the solid if uninspiring Legend of Zorro and the next preposterous Rob Cohen movie, Into the Blue, with Jessica Alba in a bikini and Paul 'wooden' Walker doing another great impersonation of a plank. Previews for the intriguing new Steve Martin - Pink Panther movie, The Da Vinci Code (whose tame trailer is just awful), Godzilla: Final Wars, Ringers: Lord of the Fans, The Cave(the poor US alternative to The Descent), Seinfeld, Fun with Dick and Jane and 'The Best of WWII Movies'.

The second disc has 'Harnessing Speed: The Making of Stealth', which is split into three twenty-five minute individual parts that can be played together. The first looks at Rob Cohen's obsession with speed in his films, with plenty of behind the scenes footage, effects shots and Cohen in interview talking about the line between exhilaration and discomfort when it comes to speed. They relied a great deal on the solid lead Josh Lucas to hold things together (and they weren't wrong) in the movie which actually broke quite a few boundaries (in being so effects-driven, it was always wondered whether they could pull it off convincingly). There is some interesting footage of weapons training, concept art (of the possible aircraft they would use), green-screen work and the original computer-generated demos of the scenes and this first part plays as basically a pre-production featurette about getting the movie off the ground.

The second part of this documentary picks up sixty days' into the shoot, where they are looking at the filming/effects process and how they actually made the planes look like they were travelling fast (using Howard Hughes' classic point of reference theory). We see them shooting some of the crash sequences (with some interesting before, during and after comparison shots), creating some of the bigger explosions and shootouts. I have to say that I did not believe that they did an explosion that big with real stunt people standing in the way - but they clearly did and it looks pretty amazing. Jessica Biel and Josh Lucas pop up halfway through for brief interview snippets, whilst taking instructions for their action sequences and Cohen discusses the creation of his own version of the DMZ (Demilitarised Done) between North and South Korea.

The slightly shorter third part looks at the more relaxing 'waterfall' segment of the movie, with more of Jessica Biel walking around in that bikini, Jamie Foxx now joining the others in interview and how they wanted a contrast to the action sequences. We then go back to the studios to wrap up post-production, looking at the live action elements in conjunction with the VFX shots (splitting them into an interesting three-stage process) and the relief of putting this two-and-a-half-year production to bed. The whole documentary closes on quite a revealing few minutes with Cohen surfing and talking about how he has reinvented himself after his heart attack, followed by a few minutes of outtakes, mostly including Jamie Foxx having a laugh.

'Detailed and Declassified' offers a Scene Deconstruction of two sequences: Kara's Fall and The Big Suck. Both scenes are particularly important and full of effects, offering an opportunity for plenty of interview bits with cast (including the lovely Jessica Biel again) and crew, along with lots of background footage, green-screen work, rehearsals, effects shots and comparisons. Each segment lasts roughly twenty-five minutes and includes a few parts where you can switch between concept art, green-screen footage and CG shots of the same sequence. They have picked two good scenes to break down and provided simply everything you could possibly know about them, thus also giving you a great deal of information into production as a whole.

MX Multi Channel uses the same picture-in-picture interface as the Deconstruction Featurettes, for two of the Alaska scenes, although here we get no background info, interviews and behind the scenes footage, instead just getting the raw clips themselves. Again they are broken into three parts, here it is final shot, concept art and CG, with the option to switch between the three using your remote control. Although they are also nice scenes to have broken down into composite parts, I think I prefer the multi-angle feature sometimes employed for DVD Special Features as this picture-in-picture interface is a little fiddly and hard to implement at times.

I don't care what the critics say, I thoroughly enjoyed Stealth from start to finish. It may be clichéd, preposterous cheesy popcorn action but it's also extremely entertaining unpretentious fun. This two-disc DVD release sees it graced with an occasionally disappointing transfer and two superb audio tracks that will keep you pinned to your sofa as it vibrates from the jet engines shooting across your living room. The extras are pretty meaty - especially the long documentary, but deleted scenes and a commentary would have provided a nice cheery on the top of the cake. If you like your Top Gun / Speed (or even, more recently, Behind Enemy Lines) action-fests as much as you enjoy your serious Award-winning dramas (albeit for entirely different reasons) then you should seriously give this a shot. It's the kind of movie that you're likely to watch again so it's probably really worth a purchase over a rental. Fans will already have it on order and sceptics should at least try and see it before they make their minds up. If you don't expect too much from it, you might find yourself thoroughly immersed in the futuristic world of these hypersonic stealth fighters and may even enjoy this frenetic rollercoaster ride.