More than just a great title 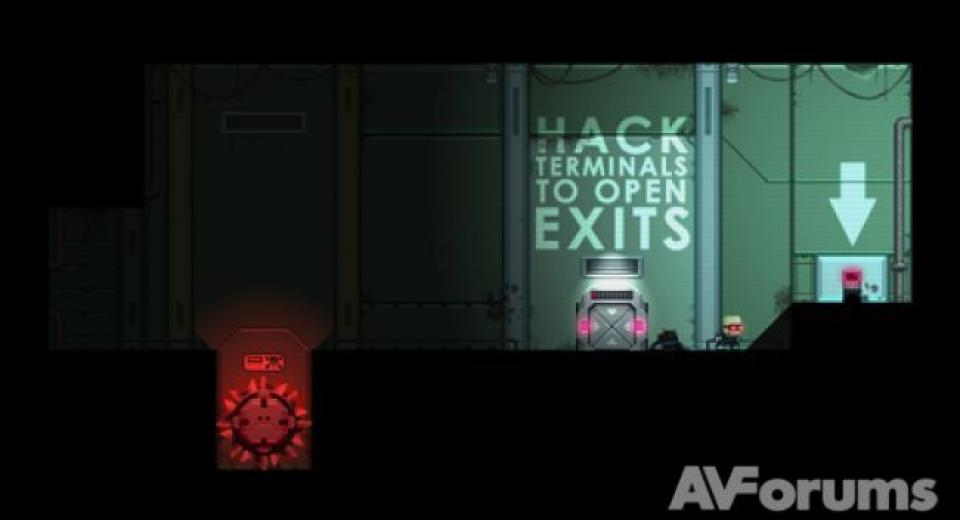 What’s in a name? Would that which we call Stealth Bastard: International Espionage Arsehole by any other name still play as sweet?
Quite possibly, yes, but it would be far less fun telling friends about it.
London-based developer Curve Studios have, in their own words, created a fusion of Metal Gear Solid and Super Meat Boy. Stealth Bastard (I’m going to take every opportunity to refer to the game by name) is a 2D single-screen, 28 level performer in which shadow-skulking (MGS) and frenetic pace (SMB) are brought together in a hugely satisfying, amusing and challenging package.
Gameplay takes the form of an escape-the-room puzzler in which you must avoid robots, cameras, lasers and other nasties by staying out of sight and moving quickly to evade traps. Maintaining the momentum is foremost in the developers’ minds. Alert a guard in Hitman, Splinter Cell, MGS etc, and you’ll be forced to retreat into a corner until the coast is clear. Not so in Stealth Bastard. Get spotted by an enemy here and it’s almost certainly insta-death: you’ll be back at the last checkpoint faster than you can yell “SNAAAAAKE!”.
Stealth Bastard is a game that knows its roots. It owes a tremendous aesthetic debt to the 16-bit era, in much the same way as Terraria and Frogatto. The art style is broadly cutesy, but can be extremely gruesome in death (put it this way: if you had to clean up, you’d get more use out of a mop than a bodybag). Guidance is provided by way of Splinter Cell: Conviction-style wall-writing, and our hero wears vaguely Sam Fisher-esque goggles throughout. Everything in this game feels like a nod to something. Speedruns are a staple of indie puzzlers and Curve Studios’ implementation of an online leaderboard is sure to keep many players busy. As you’d expect, there are already some mind-bogglingly quick times registered, but I’m sure that won’t deter the OCD hardcore.
Community engagement doesn’t end there. Stealth Bastard boasts a comprehensive level builder, including the facility to share your creations with fellow players.
This review really wouldn’t be complete without directing your attention to one particular detail: Stealth Bastard is available for free. Actual free. Free like speech. Gratis. The only thing that Curve could possibly earn from is a brief advertisement for their other titles - but this is only seen as you quit the game. It’s a tremendous bargain because this is, without a doubt, a game worth paying for. If the strategy behind the price is to raise the company’s profile, I sincerely hope it works.
If you’ve got a PC, you should download this game. And that isn’t just because it won’t cost you anything. Curve have delivered a real gem: an energetic stealth puzzler that entertains from start to finish. And to top it all off, they’ve called it Stealth Bastard. You really can’t go wrong.

London-based Curve Studios (Fluidity/Hydroventure & Explodemon!) return with this fast-paced 2D puzzler, which pays a loving homage to some of the classics of the stealth genre. Stealth Bastard is every bit as great as the name suggests, and is a must-download for PC owners, especially at the baffling price of £free.