The zombie apocalypse sucks and then you die 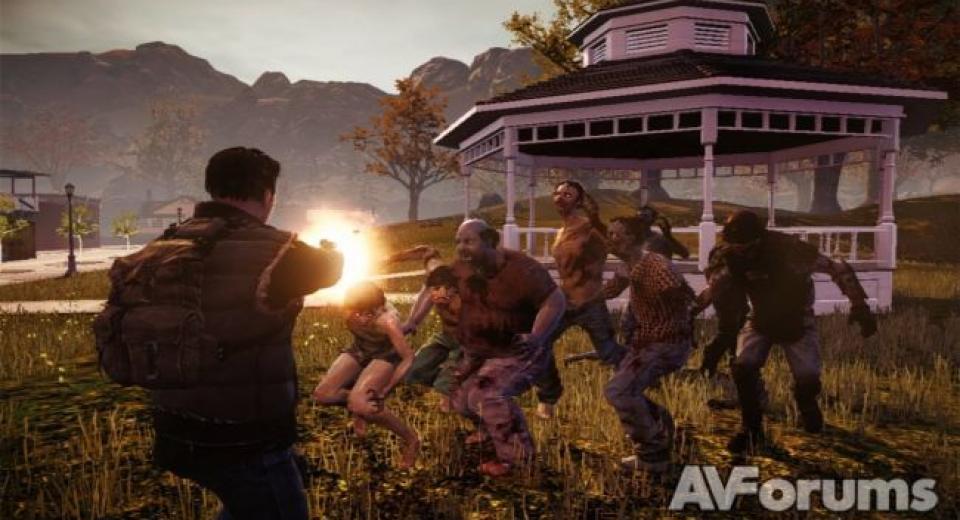 Yet another zombie game, it's hard not to roll your eyes at this point. With the undead fad unlikely to decay any time soon it can be hard not to overlook what on the surface appears to be nothing more than an another acceptable excuse to inflict all sorts of horrors on human like opponents. State of Decay's greatest problem is people assuming they know what it is, comparisons of the "GTA meets DayZ" kind do go a long way to explaining the core mechanics of the game, but it's the way they have been combined and where the developers choose to place the emphasis that promises to make State of Decay (SoD) something just that little bit different.

At the heart of SoD is the core concept of community, you may control an individual but you (should) always act in the best interests of the group as that is what ultimately matters. Perma-death under scores this, once the screen turns that ominous shade of red there is no respawn, revival or redemption, that character, all the experiences you have had and the skills you have built up are gone. You are loaded into another member of the community and the best you can hope is to retrieve the supplies your fallen comrade left behind. Story is thin on the ground, before they introduce the character switching mechanic you play as Marcus who has just come back off a relaxing fishing trip with his buddy Ed to find civilisation mysteriously collapsed while they were away. After a few tutorials in the starting area you are then released into the open world to explore and hopefully survive. The healthily sized open environment offers a variety of different locations to explore, and as you look around you will meet other survivors and have the opportunity to set up a home base. Once you reach this point you begin to get a sense of just how deep the rabbit hole goes.

Your character's abilities level up based on the amount they are utilised, so do a lot of running and your cardio skill will improve, shoot a lot of weapons and it will increase your firearms proficiency. Characters come with random traits which may give them an advantage in certain areas, which helps you to level up particular abilities faster. Once you have reached level 7 in a skill you can choose a specialisation, which opens up further options such as extra attacks for your fighting skill .

Combat is certainly a crucial element of the game, melee weapons are a key resource as guns, whilst handy in a pinch, only serve to attract more targets with their loud report so a sturdy tool to quietly crush brains with is a must. Weapons wont last forever though and when that flimsy 2x4 you have been swinging finally gives in it's back down to some hand to hand combat. The system is simple to use, Y pushes or kicks your enemy, X swings your weapon or your fists and LT and RT are your standard shooting controls. There are some finishing moves and contextual attacks you can do for a one hit kill but there is no nuance here. You won't be running head first into zombies safe in the knowledge your skills will get you through.

Zombies are dangerous. That may seem like an obvious statement but in much media zombies are slow moving cannon fodder that, beyond a jump scare, aren't really a lot of trouble; as long as you can hit a head shot or two from a reasonable distance you can pretty much handle anything. State of decay changes this with 3 key elements. The first we have mentioned, you can (and probably will) die, permanently losing any skills that character has developed and leaving any potential resources they might have in the middle of zombie central. Second is stamina; you can only swing your melee weapon so many times before you get tired and move slower, sprinting and jumping also uses stamina, and if you spend too much time exploring you will become permanently tired and need to rest in which case your stamina will run out even quicker. Lastly, but most importantly, are the brain munchers themselves. There are a mixture of enemies ranging from your Dawn of the Dead shufflers up to your 28 Day Later Usain Bolt sprinters; the herds are seasoned with some special varieties like screamers who can paralyse you with their cries, SWAT zombies who are armoured against your precious head shots, and huge zombies who can end your road kill joy rides faster than you can be dragged out of your smashed pickup.

The master stroke here is the distribution of the enemies and their sensitivity to sound, the ability to lull you into a false sense of security and the seemingly never ending stream of zombies is impressive. When you first start you will be super cautious checking every corner and flinching at every broken twig; but once you have slain a few of the undead and have done a few runs from your home base it's easy to get complacent. That is when the game will teach you a lesson. Choosing the option to search an item more quickly might result in a zombie or two entering the building, as you dispatch them a few more hear the commotion and come running, you're tired so melee and running is becoming slower and harder and the large backpack of supplies slows you down even more still. It's then you realise that there are more than you can take out to fix the situation, so you leap out the nearest window to safety and resort to firing your weapon, basically ringing the zombie dinner bell. Unfortunately bullets are also finite and the more you fire the more zombies will come until you find a vehicle and retreat or fall victim to the horde.

These are the moments that make State of Decay special, limping home tired with a broken weapon and an empty clip but a backpack full of supplies from a close encounter is a tense yet good feeling. Not only will it level up your character but it will reinforce your desire to see that character survive. When Maya, my second survivor, got slain through nothing more than hubris on my part, it was bad not just because she had developed many handy skills but also because she/we had been through a lot and now it was over, just like that she was gone. Life however must goes on, and the rest of your community needs to survive, and surviving means supplies. The main incentive for exploring the world is to collect supplies for various reasons, be it food to eat, ammo to defend yourself, medicine for the sick or materials to improve your living conditions, all of these must be scavenged and returned to home base.

Resources are distributed with a system of "Influence", every time you put something in the shared locker you gain influence and vice versa, so unless you have earned influence (i.e. contributed to the group by providing supplies or completing missions) you won't be able to clean out the weapons cache. Not that you would want to, venturing out in the convention for the dead is a delicate balance of having the tools to survive and the space to stay nimble and carry what you discover. Also ever present in the back of you head is the possibility of not making it back, resources are scarce and you might not want to risk using the only AK47 you have come across.

Your stockpiles of supplies will dictate many aspects of your community's welfare, you have a morale indicator which lets you know the overall status of your clan and prompts will inform you of shortages which need to be attended to. In order for your community to be happy and to grow you will need to improve your environment. Home bases can be upgraded with extra beds, sniper towers, as well as medical and workshop areas which can provide useful items you will need out in the wild. You also have the ability to create outposts, once you have cleared out a building and fully searched all its locations you get the option to set up an outpost, providing another place to access your communal supplies and a line of defence which will lay traps and stop large herds of zombies before they reach your front door. The theme of maintenance and upkeep not only applies to your home but your people too, survivors will periodically become unhappy, perhaps needing to head out and smash a few skulls to let off steam. These and other mission objective will continue to pop up, perhaps there might be a trade for supplies from other survivors or the need to take out several herds which are dangerously close to home. These mundane tasks and many others are more than enough to keep you busy, and beyond the initial objectives the main story beats might just get lost as you get caught up in survival.

That is what makes the SoD game loop so enticing, there is always something to be taken care of. Searching for one of your missing crew, scouting new areas for new outposts or a better location to make your home base and constant resource management; this is when you realise that SoD is not about the combat or the enemies, the focus is completely on the people and the survival of the community.

As it turns out this is a good thing, SoD is only just out of the "work in progress" category, even several weeks after launch patches with release notes as long your arm are fixing all types of bugs. Characters and zombies still clip through doors and walls, occasionally physics will send your car in a random direction and animations and voice triggers are rough and repetitive. The mechanical issues in State of Decay do little to dampen the desire to spend hours in the world. Simple visceral pleasures can be had by merely driving round the streets and hitting jay walkers with the door of your car as you fly past, or stealthing your way towards and through a location for supplies, then escaping before the herd becomes too big to manage.

But the real meat to plunge your teeth into are the RPG elements. The base building, constant hand holding of frustrating survivors and the ever fluctuating resources that need juggling constantly will drag you deeper into the apocalypse than you might think. All that hard work then folds directly into the fear you feel when a situation goes south and you get a little too close to death for comfort.

State of Decay blends the open world game with some hefty RPG elements and throws them into a survival situation in which it is very easy to get caught out and die, other titles have done the zombie apocalypse before and arguably (from a technical standpoint) done it better. Yet for placing you in the situation with all the objectives, problems and choices that come with it and not only making you scared but making you care, State of Decay gets you closer to that extinction level event than you probably ever want to get.