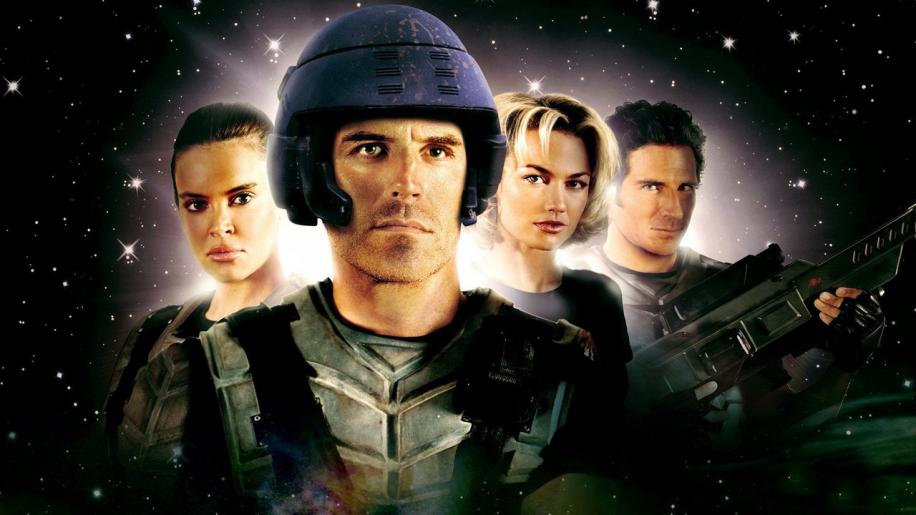 Shot on high definition video using the same technology that George Lucas used on “Star Wars: The Phantom Menace”, the picture is less than great. Framed at 1.78:1 and anamorphically enhanced I was expecting a clear transfer especially after the excellent video quality in “Underworld” which itself was mastered in high definition. Unfortunately I was left feeling disappointed. Whilst I couldn't see much in the way of blocking, some “banding” is certainly visible in scenes such as the backlit smoke during the bugs first attack on the fortress. From the commentary it is evident that the equipment was being pushed to its limits as far as light levels were concerned and it shows in the form of video noise throughout the movie. In itself this would not be too much of a problem since it emulates a natural, if grainy, film look, but when mixed with the masses of smoke in certain scenes, the general gloomy environment and then encoded for DVD, the final result is a little murky. No print damage or colouring problems are, or should be, present due to the movies digital origin. The best feature of the movie by far. The Dolby Digital 5.1 track has an excellent atmospheric mix with military battles, creeping bugs and dialogue all accompanied by a, suitably military, musical score by William T. Stromberg and W. Morgan. Moments within the film are enhanced tremendously by the encompassing soundstage which will get you checking behind you for bugs and looking for whining noises as the fort's systems are brought online. The mix is also very bass heavy and will put a smile on the faces of those who like their bass loud and low. One observation to make is that the mixing on the dialogue seemed a little indistinct and I had to boost my centre channel a little to make it out over the rest of the mix. The disc also carries an English DTS track and a French DD 2.0 (Dolby Surround) track. Extras are headed up with an excellent commentary track by Director Phil Tippet and screenwriter Ed Neumeier. The track is entertaining and informative with many nuggets of behind the scenes information. Watching, well listening, to these guys it becomes increasingly apparent that this movie was made as an act of almost pure will. In a track that would be an excellent foundation course for low budget film makers, the team discuss the problems they faced overcoming budgetary restrictions and struggling all the time to meet an increasingly approaching deadline. After hearing the many ways in which scenes were composed and practical effects and props devised in order to get the film made, I really do wish I'd found the movie as entertaining as the commentary.

”Inside The Federation” starts off as a normal “behind the scenes” featurette with the usual suspects of cast and crew complimenting each other. However, after an initially uninspiring start it does start to go into details about the production and the problems that arose when attempting to follow on from the spectacle of the first film with only a fifth of its budget available. Ending with a tribute to the Legend who is Ray Harryhausen and featuring some spoilers as to the films plot, it is certainly worth spinning this feature but either wait until you have seen the main feature or, possibly, run it instead.

From Green Screen To Silver Screen has the movies visual effects supervisor run us through the compositing process on four of the movies CGI scenes whilst “photo gallery” gives the option of cycling through various pictures taken from the production of the movie and its promotional material. Finally there are a selection of trailers which can be accessed from the main menu, special features menu and also play when the disc is first loaded. Menus are mostly static but scored.. More like the pilot for a TV spin-off than a sequel to the original movie, “Hero Of The Federation” is a really great idea for a sequel but completely stymied by its badly paced screenplay and budgetary restrictions. If you feel you really want to see it then maybe it's worth a Saturday night rental but, like most dangerous insects, it's probably best avoided.