An epic sci-fi shooter in space 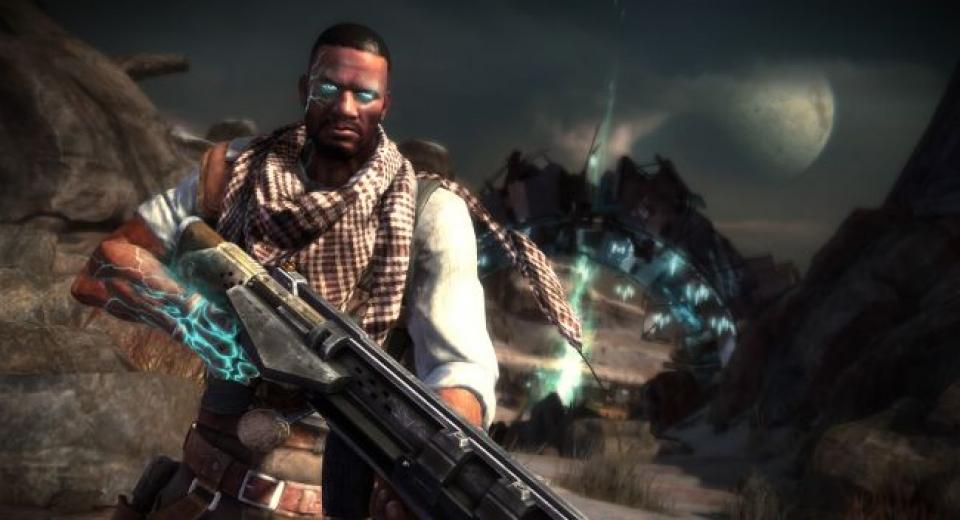 How civilizations will fuel their greed in years to come is yet to be seen as current resources run dry. So depending on the natural Rift energy that runs through the course of planets within Starhawk is probably just as plausible an idea as us finding a sustainable alternative to fossil fuels within the next twenty years.

To set the scene for Starhawk; humans haven’t changed one bit. They’re all still as greedy as they ever were whilst they constantly battle it out to dominate the remaining fuel resources. Not only does Rift energy power every motorised object across the universe, it also taints those who encounter it, forcing them to rely on it to survive. This is where you, Emmett Graves, enter the fray to gallivant across the galaxy to rid those who are stealing your resources.

You are different from everyone else however, because you can control the Rift energy as opposed to it possessing you. This allows you to heal yourself on the move whilst also granting you the ability to look bastard tough at the same time. Those who seek to thwart your efforts are the Scabs who need the energy to survive, so they’ll do everything they can to guarantee their next fix.

For anyone who isn’t aware of what this title offers up, it’s unsurprising really as there has been little information about it given away prior to its launch. Despite this title being a sort-of successor to 2007’s Warhawk on PS3, it is immediately clear from the above information that this title is completely different. The fact that Santa Monica has dropped its multiplayer-only standpoint signals this, with a single player mode in here for good measure. Starhawk is a tricky one to pigeon-hole into a genre because it straddles two big ones at the same time; one half 3rd person shooter with the other 50% being made up of Real Time Strategy elements, minus the boring hanging around and inventory gathering.

Not only this but the game has one massive joker up its sleeve; and that is its established proving ground of offering up huge online battles across the world. Nothing has changed on that front from Warhawk as the main attraction here is clearly the multiplayer which allows up to 32 people to take each other on across disciplines. But more on this later.

The two games only share the term ‘hawk’ in their titles and that’s about it. With Starhawk, players are allowed to acquire a taste for the latest addition by dipping their toe in the waters of the single player campaign. As with many online-based games of this type, the campaign acts as a training ground for the types of combat you’ll encounter online. If you were being overly critical, you could say that this mode is quite shallow and tacked on, but it is much more than that. Whereas games such as Brink did not really achieve much via their solo mode, Starhawk proves that it is possible to provide an entertaining mode that is worthwhile and effective at training you up.

So as a jump off point, you are lead through a series of basic missions that start off as your usual shooter fare before opening up and revealing what the game has to offer to make itself unique. Instantaneous structure acquisition is the name of the game here; with the press of a button your desired building will appear in front of you in seconds. This allows for tactical manoeuvres to be implemented to gain the upper hand over your enemies and defend key territory. Surprisingly, this acquisition of buildings is very well implemented into the gameplay and does not stick out like a sore thumb in doing so. Granted it does slow down the play, as expected, but it could have done so in a much more detrimental manner. By holding the triangle button and selecting the desired on-screen option from the selection wheel, you can call in your structure in a heartbeat.

Avoiding all the loitering, your buddy miles above you in an orbiting spaceship can throw down your building for immediate use by you and your squad mates. Structures at your disposal are revealed over time but your selection comprises of simple defensive turrets, supply and sniper buildings and the real winner is the vehicle dumps.

Your ground-based vehicles take the form of Star Wars inspired speeders, to bigger and better things like mobile transports and the Starhawk unit itself. This is the biggest player in the whole vehicle market as it acts as a mobile unit of death whilst also acting as a lightning quick spaceship. A space ship that has a nuclear bunker’s worth of missiles and weapons that is. So Starhawk does bear a similarity to Warhawk in terms of allowing players to take to the skies in these units, the controls of which are incredibly tight.

There is something seriously satisfying about jumping into these mechs and piloting them and then taking down several enemies in one flight. You can do so with lock-on mini-guns, homing missiles and with a good old fashioned ground stomp when on the surface. The only problem being that, when you are on the ground, you are exposed in the cockpit, so don’t be shocked if a deadeye sniper picks you off from a distance. This brings us nicely onto the weapons at your disposal. You are equipped upon spawning with a machine gun, but you can quickly gather other weapons from building supply bunkers and dead bodies. If you survive long enough you can collect an arsenal including mobile rocket launchers, shotguns, wall-destroying grinders, a sniper rifle and the good old fashioned pistol.

The only sticking point with these is the transition between each as you have to select them via the directional pad. This often results in an incorrect choice been made as weapons are stored in-between buttons at a diagonal.

All of these arms prove to be deadly in their own right; it just depends on how you decide to play each game. Lone wolves are unlikely to last long taking the high road with their machine gun and shotgun, but those who travel in a pack and work together are likely to survive for much longer. The modes for your perusal are the usual capture the flag, deathmatches and zone defences.

The title plays out in the 3rd person perspective which suits it perfectly, given the vehicles at your disposal and structure building, and the camera certainly brings this all nicely together. The only problem being with this is that the game might have been complemented that much more with a cover mechanic for those who like to travel on foot. This would tip the balance nicely in their favour if they had ample shelter from those players who favour the vehicles more than man-to-man gunfights. As expected when they are the main ingredient, players are encouraged to take to the skies as opposed to wearing their boots in. Perhaps permanent structures or underground zones on some maps would further allow players to make their own role within the title?

The maps on which your battles take place all cater for those who hang back and defend, those who build for their team mates or the adventurous guys who push further up-field and take down strategic points. Most of the time, your team’s own zone will quickly become packed up like a small village in an attempt to defend your spawn point or your flag.

If anything though, you would say that some of the maps are a bit sparse and unwelcoming for newcomers as it is a bit of a steep learning curve to get accustomed to. Spawn campers are menaces early on until you begin to learn the tricks of the trade and escape their deadly grasp, before reaping revenge on their ass.

It’s in your best interest to do this as well, given that you level up depending on your kill quantity and building acquisition. Specific kills will bring with them rewards, whilst helping out squad mates will also boost your xp counter so team play is definitely worthwhile. Gathering XP allows you to unlock features in the game such as different player skins and other accessories.

So whilst the likelihood of you buying this game for the solo aspect alone is on the same level as Joey Barton being likeable, you won’t be disappointed with the multiplayer. As long as you’re prepared to work hard at getting into it, play as a team and love, or even appreciate the setting, then this is the online shooter that you have been waiting for on PS3.

Whilst it is easy to criticise Starhawk for being too difficult early on and that the balance of play is towards those who favour aerial combat, these problems can be easily overcome once you adapt to the game's mechanics. The building acquisition and tactical aspect that comes from this allows players to team up and work together in order to prevent their adversaries getting the upper hand. For anyone who has been waiting for an online shooter for the PS3 then I suggest you pick this up at some point because you won't be disappointed as long as your 'working in a team' ethos surpasses the lone-wolf philosophy.