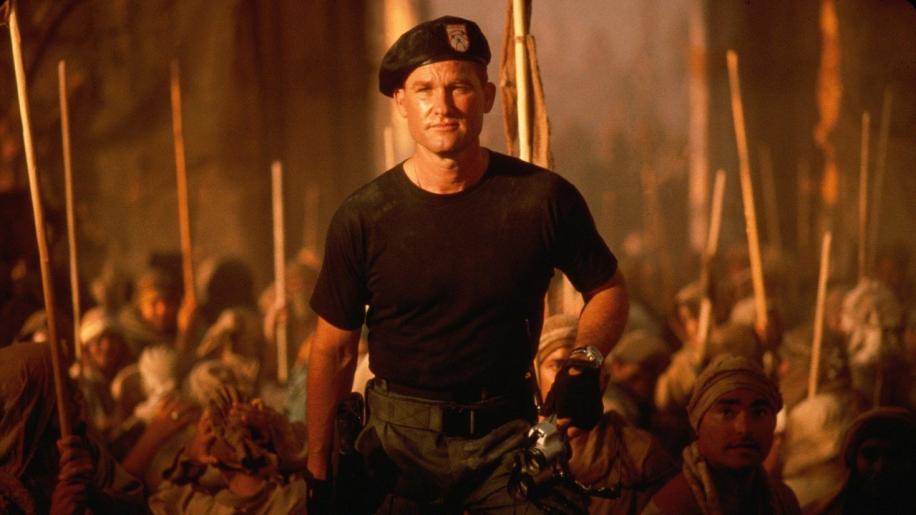 The anamorphic 2.35:1 transfer is particularly strong, making the most of the epic scale battle scenes, the shimmering desert locations and the rather nifty CGI effects which populate the film. There's not a trace of artefact in sight and what grain there is, is quickly forgotten as your eyeballs give way under the sheer weight of the stunning imagery assaulting them. A dazzling transfer which demonstrates the film's virtues in the very best light. Whatever criticisms you might care to throw at the films of Dean Devlin and Roland Emmerich (and there are many), the one thing you can always expect is a rousing soundtrack and Stargate is no exception. Subtlety is clearly a word the duo aren't particularly familiar with, but in this instance that's no bad thing. The Dolby Digital 5.1 mix on the disc is awash with spot-effects and terrific use of the surrounds. However, as good as that might be, a quick glance at the Stargate sequence in Chapter 10 with the optional DTS mix engaged lets you know that if you really want to give your subwoofer a workout then this is an audio track that demands your attention.

There's not a massive collection of additional features here, but fans of the film will probably be pleased.
Once you make it past the attractive animated menu screens there's a theatrical trailer, a photo gallery containing some rare behind-the-scenes images, the original promo reel which was presumably put together to show foreign distributors and potential licensees, and a pretty engaging feature length audio commentary by Devlin and Emmerich. The only question mark hangs over the decision to package the disc in a novelty 3-D pyramid case which is bound to frustrate owners when it comes to storing the thing. It's cool for about five seconds, and after that it's just anoying.Big, dumb and occasionally fun flick on a kick-ass disc, although we've got to question the 'whacky' packaging.