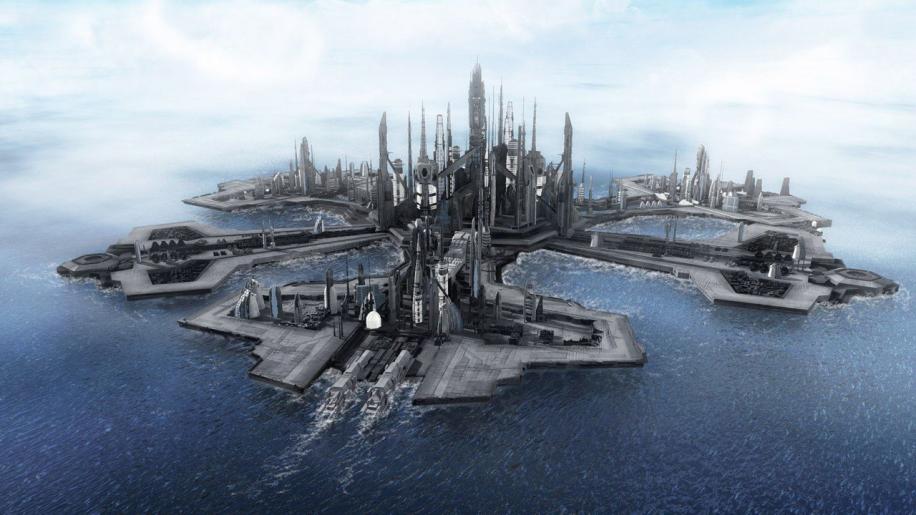 Each episode is given a broadcast correct 1.78:1 aspect anamorphically enhanced for widescreen TV picture with an average bitrate of 5.30 Mbps. On the whole this was a very impressive picture, once beyond the pilot and the heavy blue tints the colours brighten considerably. All are bold and striking with no wash or bleed. I noticed once that the colour did become bland in one scene, a dull brown veneer (I noticed the same with the SG1 set too) but it was only once. Location shots really show up the brightness and contrast well, there are very deep blacks giving nice depth to the picture with detail levels to match, studio bound material is marginally softer in detail. Digitally I registered no compression problems but did spot a whiff of edge enhancement in one or two places, being oh so new there were no print problems but the odd smattering of film grain was visible. For a TV show I was very impressed with the picture, the effects all shine off the screen; however the processing did reveal the use of the green screen a bit detracting from the illusion but nevertheless still impressive. Each episode is given three Dolby Digital sound tracks, English 5.1, Spanish and Portuguese 2.0 surround. I must admit to being slightly disappointed with the 5.1 track, I was expecting a nice immersive track with nice effects and full use of the rears, a la SG1, what I was greeted to was a rather front heavy mix with little in the way of rear usage. The score and ambience did utilise the rears, albeit subtlety, and there was the occasional decent effect that gave some nice direction, but for the most part the episodes were nice and 'safe' and concentrated on the fronts with dialogue being clear and precise. There was decent tonal range and average separation but it did lack the bass needed to give full depth. On the whole this was no more than an average track, with the occasional good thrown in. The Spanish and Portuguese were even more confined to the front, yet there range was also decent even if effects and separation were limited. There are a total of twelve audio commentaries with various members of cast and crew including directors Martin Wood and Peter DeLuise, actors Joe Flanigan, Rachel Luttrell, Tori Higginson, Paul McGillion, Rainbow Sun Francks and David Hewlett, writer Martin Gero and stunt coordinator Dan Shea. Each episode with a commentary has a number of the above individuals giving a frank and informative discussion about the show, all are very light and entertaining and there is plenty of discussion about stories, effects, casting and plenty of anecdotes to keep the entertainment value up. I was of course unable to listen to the final three.

The Set tour of Atlantis is a very light hearted piece with Martin Wood and Peter DeLuise, it involves a camcorder trip around the various sets used, with apparent pricing by DeLuise and a price gun, all nonsense of course but of reasonable interest.

The Diary of Rainbow Sun Francks is a short interview with the same, a sort of before and after piece where Francks talks about his experiences on the show, what lead to him being cast and his expectations for the future; also included is a camcorder behind the scene filming of a typical days activities.

Disc three, four and five contain Mission Directive featurettes, these are essentially behind the scenes filming and interviews with cast and crew about specific episodes, in this case The Storm/The Eye, Sanctuary, Before I Sleep and The Siege (couldn't see this one). These are all pretty in depth considering their length and there is plenty of information delivered; a nice feature to having the finished product playing along side the behind the scene camcorder raw footage at the same time.

The Wraithal Discrimination featurette takes a look at the actors and design concepts of the wraiths. A mixture of interviews behind the scene footage and actual film make up a brief and uninspiring feature.

The final disc has a look back at the Season, but I am unable to comment on it.Each disc has a series of production and design photo graphs to accompany the episodes. There are also trailers for new films; of special interest to me was the Final Fantasy one, it being my favourite PS1 game. Stargate Atlantis has great potential, after a slow start the series and story lines really gained momentum. It has a clear identity of its own but still retains enough of the magic that makes SG1 so special. Provided the character dynamics are worked on a little I can see this series becoming as popular as its mother. As a DVD set each episode is given a very good transfer with moderate sound. There are a fair amount of extras but all of a reasonable quality, I liked the compact nature of the set too. If only the fifth disc was there....