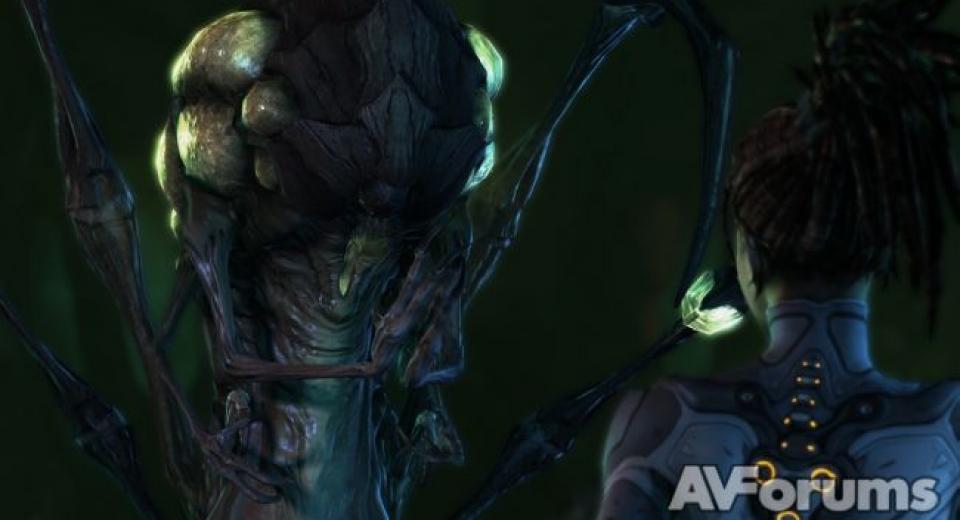 As Starcraft players go, I might be one of the outsiders. Though the much-celebrated multiplayer aspects of Blizzard’s sci-fi RTS grasp me intermittently in any given year, I’m driven to each new release primarily by an enthusiasm for the campaign rather than the lightning-quick reflexes and acute strategical nous required to compete at high levels. It’s not that multiplayer is overly-punishing for casual players (the ladder system and vast player base eliminates the mismatching issues seen elsewhere) but rather that Starcraft simply excels on both fronts, and an RTS game with a compelling campaign is a rare treat to be savoured. Nobody but Blizzard seems to be able to pull that trick consistently.
Heart of the Swarm offers up a Zerg-themed chapter of their pulpy sci-fi storyline along with a sizeable wedge of new multiplayer content at a reduced price point to that of the original. Ownership of Wings of Liberty is still a requirement of play, but to all intents and purposes these are different games, despite being launched with the same front-end. Starcraft’s multiplayer is potentially at risk of splintering its competitive audience in the short-term then, but it’s likely the vast majority of players will quickly move across to whichever variant is being promoted in tournaments and on TV, and I suspect that process for Heart of the Swarm will be accelerated thanks to considerable exposure at e-sports venues, trade shows and streaming events for the best part of a year. And those that are purely into Starcraft for their multiplayer buzz will be pleased to discover a raft of tweaks buried in the intricacies of Heart of the Swarm, along with seven new units that span each of the playable factions (Protoss win out with two entirely new ships and a repurposed mothership that might as well be). Although it’s far too early to determine which of them will be successful, the next few months will see new and existing tactics implemented or adapted for the likes of the Zerg’s mobile defensive Swarm Host, the fragile buff-casting Protoss Oracle ship or the mechanised Terran Hellbat. A new ranking and customisation mechanic has also been developed for the metagame, aping those of established shooters with a procession of unlocks and badges to customise the experience.
Despite those changes however, Heart of the Swarm is largely the same fast-paced and complex online experience that most people will already either love or hate. For me, it’s still a thrilling game when I’m matched against fellow opponents at the lower ends of the ladder, and the sheer variety of tactics (and speed of implementation) are a sight to behold when playing against anybody truly skilled. The new units are mostly fun to tinker with (although I’m yet to deploy the Mothership Core for anything other than a quick failure), and the early experience against opponents developing their own tactics is currently turning every game into somewhat of a mission of discovery. Or a crushing lesson. Either way, it’s never dull. If that’s not your cup of tea however, then the campaign mode awaits. If you played the original then you’ll know roughly what’s in store here, which is to say a lengthy procession of missions interspersed with superbly-produced cutscenes. The “Queen of Blades” Sarah Kerrigan has been freshly sprung from her role as leader of the Zerg by space trucker Jimmy Raynor, but despite a newly-amicable relationship with her former pursuers, a convenient contrivance swiftly places her back into the fold of her former charges. What follows is a series of of battles against Protoss, Terrans and the indigenous species littering the planets and wastelands bookending the Zerg’s never-ending pursuit of evolutionary progress and Kerrigan’s burning desire for hell-bent revenge at all costs. It’s a silly plot, occasionally full of ham and overly-serious in its delivery, but it’s also never on the wrong side of being self-aware, ending up as mostly likable sci-fi cheese.
Heart of the Swarm’s campaign structure is largely analogous to that of Jim Raynor’s in Wings of Liberty, with Kerrigan quickly finding herself in charge of her own ship manned by a host of Zerg characters. Between missions her shipmates offer up unique insight into the plight of the Zerg as well as their own tech tree of unit upgrades and specialist powers, with mini “evolution” tasks showcasing all the major new abilities before decisions are made on how to spec your army. Those unit upgrades allow you to take your forces in any number of tactical directions, and Kerrigan herself is also treated to a similar tech tree that can be expanded quickly by completing bonus objectives as the game progresses. Although it could be argued that each of the 20+ story missions ostensibly exists to teach players a facet of micro or macro strategy to take into multiplayer, the beauty of Blizzard’s design is that they constantly mask their tutorialising with unique battlefield tasks that rarely subject players to simply building a base and conquering their opponent. That same philosophy was in place for Wings of Liberty and it works again here, with highlights including a trench battle against Terran ships that attack in timed waves, a defensive onslaught on a map that houses two feral Zerg armies fighting against each other and occasionally breaking ranks to attack your position, and a Little Shop of Horrors moment in which your army is required to feed a colossal ancient Zerg in order to bring its powers to bear.
As RTS campaigns go, Starcraft 2 still stands head and shoulders above all others in the areas that count, and it’s the mission design, unique content and upgrades that propel it to those heights. Overpowered or imbalanced abilities and unit variations end up working their way from the multiplayer cutting room into the campaign missions in some form, and as a clearing house for madcap ideas it’s fantastic fun. As an ongoing story it might be questionable on more than a few levels when you begin to take things as a whole, but Heart of the Swarm at the very least accomplishes the task of presenting the Zerg in a charismatic fashion. Indeed there are more than a fair share of likeable characters contained within the seeping, infested walls of Kerrigan’s vessel, which is a surprising achievement even given Blizzard’s history within the genre.

What’s not surprising is that, when taken as a whole, Heart of the Swarm continues Starcraft’s dominance of the RTS genre with considerable ease. It’s very much the same beast as its forebear, but frankly this is a formula that hasn’t yet overstayed its welcome, so more of the same will be perfectly ok for the majority of the audience. With the final chapter likely at least another two or three years away, let’s hope that Blizzard continues its evolution of the series with careful tweaking of multiplayer balance and that same acute awareness of their community, and even if things do go horribly wrong in the interim, Heart of the Swarm is still a thoroughly entertaining singleplayer romp. Just don’t take the storyline too seriously.