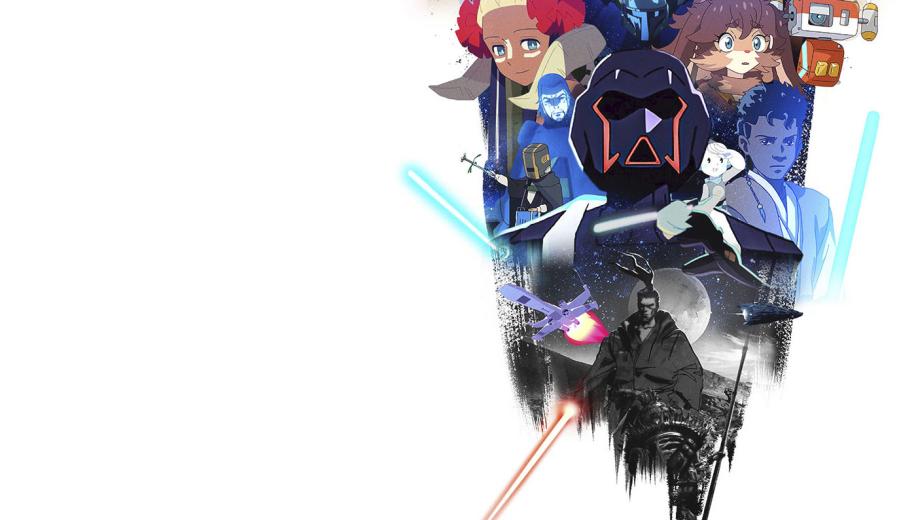 Whilst the Big Screen efforts of Disney to perpetuate Star Wars ad infinitum may be in something of a holding pattern due to the reception of The Sequel Trilogy, its smaller screen offerings continue to entice - and with good reason. The Mandalorian was everything Star Wars fans have been waiting for since The Original Trilogy (and have only, thus far, enjoyed in Rogue One when it comes to the Big Screen), The Book of Boba Fett looks to capitalise on the popular character's resurrection, and Kenobi brings one of the best elements of The Prequel Trilogy to the fore on the small screen too. And whilst we wait for more of these live action TV shows, Disney offers Star Wars: Visions, an anthology of disparate - but generally Jedi-centric - tales from across this galaxy.

... a colourful and dynamic show which, with a little refinement, could go places

Set in various times during the Star Wars eras - predominantly, presumably, during the "Great Purge" era where Jedi were being hunted between Darth Vader's rise in Revenge of the Sith and Luke's rise in A New Hope - the nine episodes are discrete short stories likely somewhat inspired by the numerous comic book anthologies over the decades (including, for example, Star Wars: Visionaries). Largely avoiding reference to, let alone the actual inclusion of, core characters from across the known universe, Visions instead trades in peripheral Jedi lore, colouring in the fringes of this vast universe.

Disney Plus releases all 9 episodes of what is likely only the first of many seasons of Star Wars: Visions in 4K Ultra HD with Dolby Vision and 5.1 sound. The vibrant tales are quite varied in style, some more cartoon-y, some stunning in their textures, and some traditional anime-style, with even the throwback Kurosawa-flavoured near-monochrome episode laced with pops of vivid energy (not least from those sabers) which sear the screen with intensity. The tones are rich, the colours vibrantly reproduced, and the visuals frequently impress, even if none of the episodes quiet achieve that photorealistic look that some of Netflix's Love, Death and Robots pulls off (here, perhaps they were not going for it). The score blends some nice traditional classically-styled notes with the kind of excellent scoring you would expect from Ghost in the Shell, to often tremendous effect.

As with the Netflix anthology, Disney's Star Wars: Visions will offer hopefully a few hits in its opening salvo, with tastes varying on which are the preferred entries but with potentially something for everybody. The sci-fi themes are hardly strong, but there's no holding back on the Star Wars world-building front which, for many, may be enough of a selling point to engage with this set.

The opening episode - The Duel - is an absolute high point, going for full Kurosawa/Yojimbo vibes in its faux-scratched sepia/monochrome look (hints of Ghost of Tsushima here), showcasing a distinct feudal Japan bent, and an appropriate spin on the saber style too. Each episode is only around 15-20 minutes, so there isn't a huge amount of time to get into the characterisation, but that works perfectly for the mystery of the opening chapter, even if it holds back subsequent chapters as being a little less substantial.

Tattoine Rhapsody is a slighter affair, with a more cartoony style, but it does have one of the better voice casts and cameos (Joseph Gordon-Levitt and Temuera Morrison), whilst The Twins manages to offer some very impressive space visuals (the nod to The Last Jedi does not go unnoticed) as it looks at an alternative pair of force-centric twins whose fate could change the course of the galaxy. The Village Bride takes a minute to get going, but enjoys some more samurai vibes in its finale, and The Ninth Jedi feels very much like the classic "Purge" where a group of exiled Jedis attempt to lure Vader into a trap, only here with the story dynamic shifted to avoid referencing central characters. After The Duel, it's another top episode. TB-01 has some fun with the boundaries of 'what is a Jedi', The Elder goes samurai once again for a detective investigation involving a Padawan and his master (David Harbour) looking for a mysterious 'Elder' (nice nod to Big Trouble in Little China), and could have easily been an Obi/Qui-Gon tale repurposed, ranking as a definite highlight too. Lop & Ocho has got Studio Ghibli vibes (and scoring) but doesn't always quite fit in with the SW universe, and the season closes out strong with Akakiri. Clearly the highlights are the 3-4 core episodes with a samurai vibe.

For those who are tired of Star Wars, Visions is hardly going to be of any interest, but for those whose fires have been rekindled by The Mandalorian, and whose hopes lie in more of this diverse TV fare, this is a colourful and dynamic show which, with a little refinement, could go places. Certainly a whole season in the style of The Duel, a proper Kurosawa-fuelled return to Star Wars' samurai roots, replete with future-vintage style and future-feudal setting, would be very welcome but, even without the slightest chance that will ever happen, there are still enough moments of glory here to give this a few hours of your time.

Star Wars: Visions Season 1 is released on Disney Plus from 20 September, with all 9 episodes available in 4K Ultra HD with Dolby Vision.