Little more than a rehash of the original film, it still succeeds 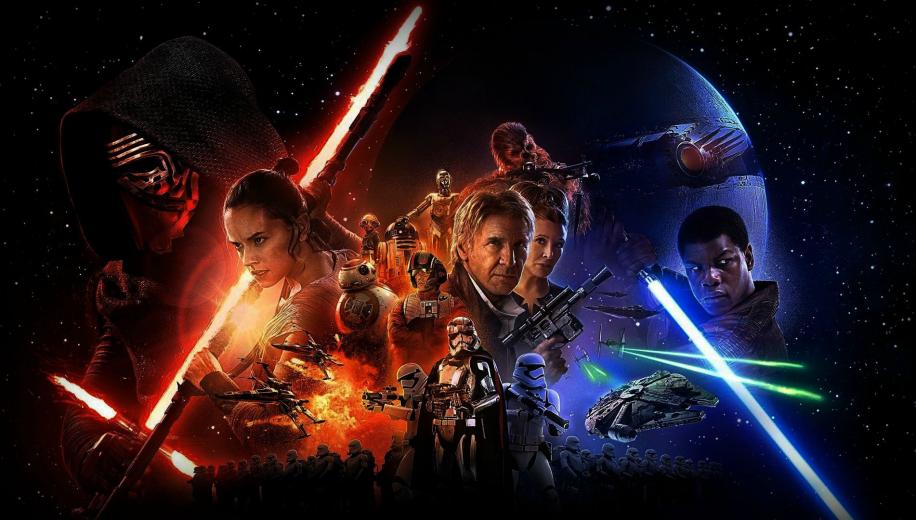 I didn't know there was this much green in the whole galaxy!

There was a lot riding on The Force Awakens. George Lucas had for years been systematically destroying childhoods worldwide, first with his incessant and unnecessary tinkering with the classic trilogy, then with the horrors of the Prequel trilogy, and finally he sold the entire franchise to Disney, who, just like a child in a sweetshop, threw everything into new Star Wars features.

The Force Awakens was to kick off a new final trilogy to complete the saga of nine, as well as a whole raft of Star Wars themed films, it therefore had to succeed. And to make sure, they brought in talent in the form of superfan J.J. Abrams to direct, veteran Star Wars writer Lawrence Kasdan and even the original cast in the guise of Mark Hamill, Carrie Fisher and Harrison Ford. They also wanted to pay service to the fans, by giving them a Star Wars they could feel good about. They succeeded on all fronts

The film is light, fast and it feels like Star Wars

The new cast is young, energetic, had terrific screen presence and character chemistry; there were nods to the original film, scattered throughout and the film is light, fast and feels like Star Wars. The story of a scavenger, finding The Force and battling against a new galactic enemy, The First Order, who rose from the ashes the fallen Empire, then joining forces with the resistance to help destroy a new superweapon, had all the hallmarks of the classic films, while bringing a new generation into the Star Wars universe.

The trouble is, it’s too much like the classics. Indeed, it is little more than a rehash, soft reboot of the original Star Wars, with a whole load of fan service thrown in. It was ‘member berries’. And objectively, I can see that clearly. The other trouble is, it’s just so damn entertaining, you cannot help but be drawn in – it does everything right. The new cast works, the script literally killing off the old to make way for the new, while smoothing the transition with eye candy and investiture in the characters. A blistering start to the new trilogy.

Such a shame that all this good work was trashed by the next film to come along.

Now we’re talking. The image afforded on this disc is stunning and beautifully filmic. Detail is crisp throughout, skin texture, clothing weaves, the sand on Jakku, the flora on Takodana, computer terminals, weapons, droid coverings, wide establishing shots – everything is keen and well edged. Check out the First Order army as they are being addressed, pure eye candy! The HDR and WCG give some extra punch to the colours: depth of orange to the explosions, the lush green of the aerial shots over Takodana and the deep reds of the First Order flags.

Black level is terrific giving strong depth to frame, check out the insides of the downed Star Destroyer, or the forest during Rey and Kylo’s sabre battle. White scale is also well realised, highlights are piercing, check out sparks, or laser fire; light sabres are stunning in their intensity.

Digitally, there are no issues and the source is perfect. An amazing picture.

The Dolby Atmos surround track is every bit as good as the visuals (it does need significant volume adjustment, though) with a tangible sense of immersion. Effects are pinpoint accurate around the room, with both surrounds and overhead channels serving up the goods; action scenes fare extremely well, with laser shots and explosions and associated debris filling the room – check out Poe’s fly through on the battle in Takodana, with his X-wing swooping around and above, while the ground battle takes place below and around, terrific stuff. Bass is deep, thight and controlled, with plenty of LF effects to keep the sub happy, Kylo's 'force interrogation' is enough to rattle the foundations of even the best built house!

Dialogue is prioritised towards the front, but is given directionality when needed, and sounds very natural. The score is a majestic mix that uses all the speakers for an incredible surround experience, the opening crawl, during action scenes or quieter moments, the separation is wide and the mix is extraordinary. The 3D layering of the whole mix is stunning, with all channels contributing to the experience.

The UHD disc reviewed comes as part of the ‘Skywalker Saga’ set which is a lavish box set and included is a collector’s book, that houses all the discs (careful as you remove them!), two Blu-rays, one with the film, the other loaded with extras and a letter from Mark Hamill himself. The UHD has no extras itself, and all the extras have been seen before on the 2D and 3D Blu-ray releases.

Secrets of The Force Awakens: A Cinematic Journey

The Scavenger & The Stormtrooper: A Conversation with Daisy Ridley and John Boyega

The Story Awakens: The Table Read

Blueprint of a Battle: The Snow Fight

ILM: The Visual Magic of the Force

Sounds of the Resistance

Whist there was a lot riding on The Force Awakens, Disney were taking no chances; the talent both behind and in front of the camera was deliberately chosen, and even though the script is little more than a rehash of the original film, it nevertheless succeeds in every regard, right down to the fan service. It set out what is was meant to do; refresh the Star Wars universe and prepare a new generation for a new trilogy.

The 4K UHD package from Disney is amazing; a lavish box set, housing all discs from the ‘Skywalker Saga’ in a presentation book; the native 4K image is simply stunning, pin sharp detail, strong bold colours and a terrific black level; while the Dolby Atmos track (after volume adjustment) is fully immersive with good separation and deep bass. The extras package, whilst not new, is pretty extensive.