Doesn't quite have that epic quality 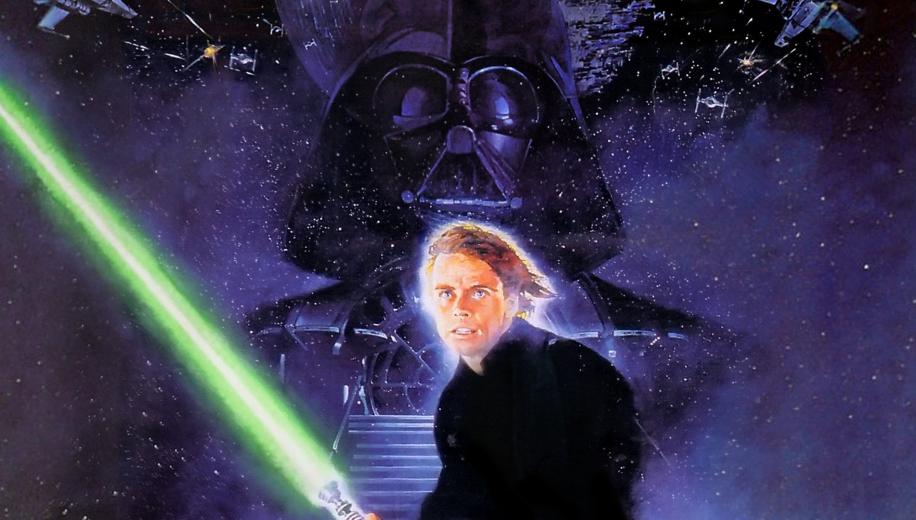 So, what I told you was true... from a certain point of view.

Ah, the beginning of the end.

After the continuing success of the franchise, by 1983 Lucas had become the very thing he had spent his entire life bucking – the system. The companies developed to realise the vision of Star Wars were now the de facto companies used by the Hollywood machine, raising the profile and giving him the clout he so desperately desired, to be free from any studio interference and able to make type of film he wanted. In practice, this essentially meant that there was nobody to rein in the madness; no one to say no. Hence, ideas that were discarded in earlier drafts of the first two films were resurrected (primitive race defeating technological race, originally Wookies, now … Ewoks, for one) and what had, at one time been a grand space opera, was reduced to a handful of characters fighting their own agenda – Star Wars from this point on became trapped in its own universe.

This time the directing duties went to Richard Marquand, but, with Lucas now fully in charge of production and script duties, the vision was far more that of the creator than the director. Oh, there were deeper elements of family, temptation and love, over and above the ‘good vs evil’, while the overall victory being claimed by the most evil character is delicious, even if it ironically sparked this entire ‘Skywalker Saga’, yet the film doesn’t quite have that epic quality, that edge or magic of the previous films despite the conflict and marked a downward spiral that we are still in. With the completion of this film, fans would have to wait 16 years before Star Wars would have a new film in theatres, meantime Lucas busied himself by adding in superfluous and unnecessary CGI to his classic creations, which is how we see them today.

Return of the Jedi 4K Video

Return of the Jedi was shot using a combination of Arriflex 35 BL3 and Arriflex 35-IIC cameras on 35mm film, and has been newly scanned with 4K resolution for this release. It should be noted that the latest ‘Special Edition edit’ has been the source for this scan, it therefore contains much of the colouring inherent to that release. The disc presents a native 3840 x 2160p resolution image in the widescreen 2.39:1 aspect ratio, and uses 10-bit video depth, High Dynamic Range, and is encoded using the HEVC (H.265) codec for HDR10. We reviewed the Region free UK Ultra HD Blu-ray release of Return of the Jedi on a Panasonic 65DX902B Ultra HD 4K TV with a Panasonic DMP-UB400 Ultra HD Blu-ray player.

Once again we can banish the old Blu-ray

Once again we can banish the old Blu-ray as this new scan beats it in every regard, even if it suffers from similar issues to Empire. The detail on show, for the most part, is stunning, check out the clean crisp lines of the interior of the Death Star hanger when Darth Vader first arrives, how defined each Stormtrooper is, how Vader’s cloak moves against the background, the same can be said for when the Emperor arrives. Skin has better, more defined texture, clothing has discernible weaves and with the control terminals and R2 and 3PO’s damage, there are elements of greatness.

Colouring too, is more robust, with greater depth to the oranges of the sand, the greens in the forests and the blues of the skies. The camouflage of the rebels, the bark of the trees, likewise the greys aboard the Death Star. Black level is wonderful, deep in Jabba’s palace, or when the shutters close on the barge, or during Luke and Vader’s epic light sabre battle, see the depth of frame and shadow detail; and how the sabres pierce the blackness with their vividness, how the highlights push the frame.

And yet, frustratingly, there are times when the picture looks like a stodgy mess; many times during the forests of Endor, the image is soft, muddy and grim; the clean-up tools being pushed too hard have scrubbed places of texture so that it looks up-scaled. Grain is barely noticeable and static, even though the original source is pristine. A crying shame.

Return of the Jedi 4K Audio

The English Dolby Atmos track has no such issues, it being an exercise in sonic wonder. All the channels combine to give a fully immersive experience; this is shown wonderfully with the score during the opening crawl, where is it possible to separate out individual instruments, left, right, above and below. Action scenes take their fair share of effects, utilising surrounds and overhead channels, be that the battle on Jabba’s barge, on Endor or in space, there is a real sense of ‘being’.

Only a slight volume nudge is needed

Bass is tremendous, with some truly giant explosions able to rattle the window frames (barge destruction) but still remaining tight and controlled. Ambient effects, the chattering in Jabba’s palace or on Endor, are placed well, and dialogue is dominated by the frontal array and never lost in the mix. Only a slight volume nudge is needed to get the most out of it.

Return of the Jedi 4K Extras

Conversations: The Effects – 10 minutes with Dennis Muren, Phil Tippett, Roger Guyett, and John Knoll as they have a brief chat about their amazing work throughout the franchise. New for this release.

Discoveries from Inside: The Sounds of Ben Burtt – Spend 5 minutes with J.W. Rinzler and Ben Burtt as they go through some of the iconic sounds that make up the franchise. New to this release.

Classic Creatures: Return of the Jedi

With the close of Return of the Jedi, not only were the Empire defeated and it drew the original trilogy to a close, it also marked a decline in the franchise lead by its creator. The franchise, despite the huge reaches of space managed to get trapped inside its own universe and began relying on cheap gags and filling in unnecessary story ideas rather than bringing anything new. That said, Return, is a satisfying conclusion, albeit one that, ironically, sowed the ideas for this complete saga.

The 4K UHD package from Disney is amazing; a lavish box set, housing all discs from the ‘Skywalker Saga’ in a presentation book; the native 4K image, though, is a bit frustrating, with its moments of pure clarity and definition up against the occasional stodgy mess, but on balance it is the best the film has ever looked; while the Dolby Atmos surround track is stunning in terms of separation, immersion and bass. The extras package is huge and even manages to slip a few new bits into the mix.