The Force is strong with this one… 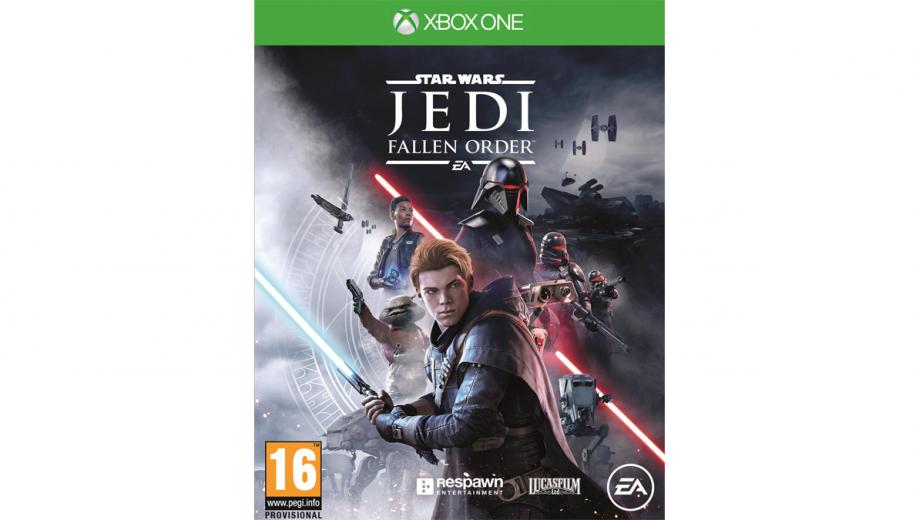 While the films have been happily bouncing all over the Star Wars universe these past few years, the videogames have largely stuck on the Battlefront. However, with Star Wars Jedi: Fallen Order, that all changes with the action reverting back to the close-quarters, force-driven combat we saw with the likes of The Force Unleashed around a decade ago. Yep, it really was 2008 when that first came out…

The game is a completely single-player experience, with an open-world navigation and exploration system that will be familiar to anyone who’s played a Tomb Raider title recently (or Uncharted, God of War and so on) and has developer Respawn Entertainment at the helm, fresh from Titanfall 2 and Apex Legends. It all adds up to a bold new world for Star Wars gamers, and one that could well mark an intriguing new spin-off franchise that could become a real, ahem, force.

You take on the role of Cal Kestis, a former Padawan on the run after Order 66 effectively outlawed Jedis with the Empire’s Inquisitors sent to hunt them all down. Forced out of hiding, Cal teams up with a fallen Jedi, Cere, a grouchy yet likeable pilot called Greezy and the cute and ever-helpful droid BD-1. It’s a clichéd rag-tag bunch but they all have their own interesting stories to tell and, as your ever-faithful sidekick, BD-1 can also offer up with some in-game hints should you get stuck. With word of a Holocron containing the locations of all Force-friendly children in the galaxy, the crew set out to fight back against the Empire and restore the Jedi Order.

In a typical manner, you start off relatively weak, with only your lightsabre and some flawless climbing skills to play with. Regardless, as far as opening scenes go, the first 15 minutes or so of the game make for an exhilarating introduction to the action. The visuals are stunning, the classic underlying Star Wars orchestral score sways in and out perfectly, while the camera also ensures the action is beautifully cinematic. Sadly, that is about as good as it gets, but there are still plenty of moments that come close to it.
It might take you a while to really get back into the swing of things, but things definitely pick up after you’ve gained a few force powers (notably push and pull) as well as upgrading your sabre with some new moves. The combat isn’t as combo-heavy as the likes of a Devil May Cry, but you can unlock some seriously cool moves as you progress, including two awesomely cool upgrades to a double and then to split lightsabers (which can be used as a double or dual-wielded blades). The action definitely goes up a notch once those are in your hands.

Based largely on a counter-attack system, you can’t just wade into enemies mashing a couple of buttons and expect success every time. Instead, it pays to dodge, block or ideally parry attacks with good timing and then counter with hits of your own. Certainly, learning attack patterns helps but it’s not hugely complicated and when it comes to crowd control, divide and conquer is key to thinning the herd – with the double sabre better for multiple enemies while the single blade does more damage making it a better for boss fights or some of the fun mini-boss bounty hunters you get to cross paths with.

With a lightsabre in your hands, combat should be a whole heap of fun but, depending on the difficulty setting you choose, it can also be very frustrating. Changeable at any time, the four difficulty levels change the aggression level and damage dished out by all enemies – though thankfully their health remains constant or some battles could give your thumbs some serious RSI.

Even at the default setting, it’s still very easy to absorb a lot of damage and die incredibly quickly. Seasoned hack and slash gamers might love the challenge of the higher difficulties but Star Wars fans coming in on a diet of Battlefront and other shooters might struggle. It doesn’t help that even some of the lower Empire enemies are incredibly good at blocking your attacks. Plus, you can get trapped in their combos or stuck in the animations of your own attacks with over-exuberant mashing and subsequently be unable to dodge or jump out of trouble.
It doesn’t help that persistent issues with the camera sometimes means that both you and your foes can be lost off-screen at key moments and so death can come quickly and often. Sometimes this wouldn’t be a problem, but the game uses a respawn system that is tied to ‘Meditation Circles’ as your save points and they’re not always conveniently placed. The system does offer a nice strategic edge, though, in that you can restock up fully on health, health-boosting stims and force power, but at the cost of all killed enemies in the area coming back to life – the obvious tip being to use it when entering a new area and not back-tracking.


We found Fallen Order a lot more enjoyable on easy

However, dying often and being faced with long and repeated trips over the same ground can get tiresome very quickly, which can kill your momentum and immersion, so if that’s the case then don’t be afraid to drop down to the lowest setting and just enjoy the ride. We did it more for the sake of time, but as purely a Star Wars experience rather than a challenging combat one, we found The Fallen Order a lot more enjoyable on easy.

Sure, it can feel a bit like cheating but a decent challenge still exists and you have that much more freedom to soak up the exploration of the very impressive locations on offer. With a typically awesome orchestral score throughout, seasoned Star Wars fans can get a real kick out of dipping the in-game audio, cranking up the music and letting your surround system transport you to a galaxy far, far away. Alternatively, God of War veterans can whack things up to ‘Jedi Master’ levels and show those Stormtroopers just exactly what you can do.

Lara Croft is a Jedi

Along with the combat, the other big element of Fallen Order is the exploration. You’ll get to visit several different planets, each with their own networks of paths to follow, secrets to unlock and collectables to find – most of which tie into the game’s lore or some arbitrary customisation options that we rarely touched, but they can also add some nice XP. There’s usually a core path to follow but with plenty of optional distractions along the way.

As you might expect, several areas will be out of bounds until you’ve unlocked a certain force power or learned a new navigation ability, but you’re free to return at any point and the rewards can certainly make the later missions that much easier. Things are helped by great 3D map that highlights all areas that are inaccessible, newly accessible or yet to be explored, so completionists will have no trouble cleaning up each location – save for a few long journeys as there’s no fast travel and so it pays to find all the shortcuts that will cut out many of the more tedious platforming sections.
As mentioned, Tomb Raider fans will find the navigation largely familiar, with wall runs, double jumps, vines to climb, ropes to swing from and conveniently painted ledges to clamber across – sometimes with a little force required to solve a puzzle. As far as heroes go, Cal ticks a lot of the right boxes. He’s capable of crossing perilously placed beams with ease, slides down slopes cooler than Marty McFly on a hoverboard and can somehow drop from huge heights without smashing both of his legs. The perks of being a Jedi, eh?


Navigation is frequently and unnecessarily awkward

Unfortunately, though often great fun as you string a sequence of cool moves together, the navigation is also frequently and unnecessarily awkward. While the path you need to take might be obvious, some of the jumps are needlessly hit and miss, and it can take several attempts to clear what should be a fun and fluent section. In the game’s defence, one huge bonus is that falling from any of these mistakes isn’t fatal, as you just re-appear at the beginning of the jump without the need to trudge back from a Meditation Circle – otherwise our controller might not have made it to the end credits in one piece.

In some ways, those annoyances kind of sum up Star Wars Jedi: Fallen Order. The game does tend to have something of a ‘rollercoaster’ feel, with great highs quickly tempered by frustrating lows. There are moments of brilliance, such as an epic climb to take over a Walker before tearing through Empire defences, that are quickly tainted because you died 10 seconds after walking into a room or repeatedly fail to make a simple jump. This is definitely the case with the ending which has a massive ‘wow’ moment quickly followed by us falling off a platform for no obvious reason…

However, the game succeeds more as the sum of its parts, especially in the second half of the game once you’ve mastered most of the core skills and unlocked some of the cooler combat moves. Visually it’s impressive throughout which really helps, to the point where the in-game action is actually better than some of the cut-scenes, especially in terms of the backdrops and when the camera works to great cinematic effect when you take down enemies. And, as mentioned, it’s hard not to get pumped when the legacy of John T. Williams masterful score is reverberating through your speakers.
Star Wars fans should also enjoy the story, with plenty of background lore and narrative to glean from events and a little exploration. Plus there’s a great cast, led by Cameron Monaghan (‘junior Joker’ Jerome in Gotham), with the likes of Forest Whittaker, Liam ‘Spartacus’ McIntyre and a veritable who’s who of gaming and animation’s finest voice talent also adding weight to proceedings – including Sam Witwer who voiced Starkiller in those earlier Force Unleashed titles, and has appeared in almost every Star Wars game since. It all combines to make a rich and rewarding experience, with characters you can root for and a story which certainly adds to the greater Star Wars universe.

Combining a slick close-combat system with the freedom to explore some impressive locations, Star Wars Jedi: Fallen Order is a hugely enjoyable addition to the Star Wars universe and a welcome shift in stance for its gaming portfolio. Neither the action nor the navigation can claim to be the best in the business and there are more than a few frustrations that can curb your enthusiasm, but there’s still a great adventure to soak up.

With a solid storyline, impressive visuals and an awesome soundtrack, Star Wars fans and action gamers alike can immerse themselves in young Cal’s adventure – and with a decent ending that leaves things nicely open for further adventures, there’s certainly scope for a new (X-)wing of the Star Wars franchise and so perhaps Cal won’t be the last Jedi in this particular universe…