The worst space chase, the best use of light speed, the worst overuse of comedy, the best lightsaber battle. 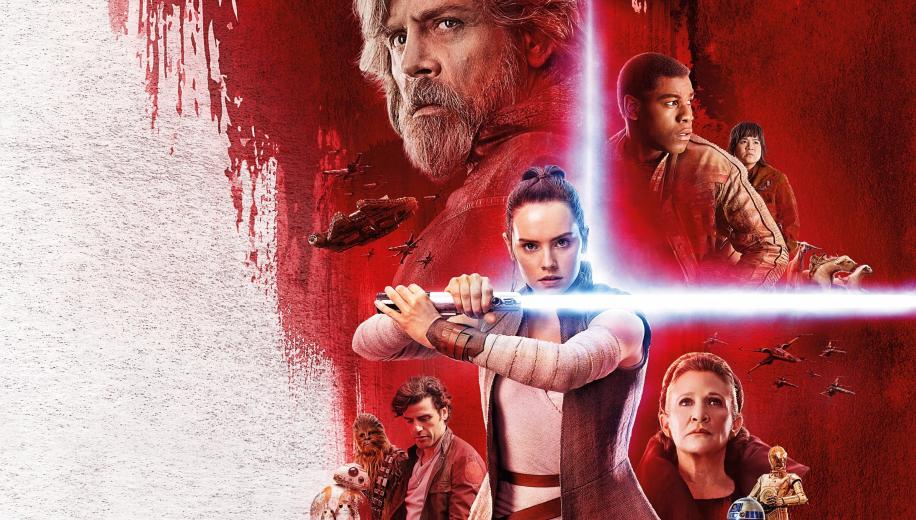 Rian Johnson's controversial and divisive follow-up to the much safer The Force Awakens is a bloated combination of spectacular setpieces and monumental missteps.

Whilst there's no denying the many fatal problems that flawed George Lucas' prequels, there has never before been as divisive a Star Wars property as The Last Jedi, splitting many long term fans broadly into two opposing camps: those who embrace the franchise's biggest shake-up as a breath of fresh air, and those who think it's the most sacrilegious betrayal of Star Wars mythology ever committed to film. There are points to both sides, but it would be blinkered to regard The Last Jedi as anything less than patently flawed, even from those who champion some of the 'daring' choices Johnson made, particularly when some judicious editing could have easily made this a leaner shark that would have been much harder to criticise. Johnson finds foundation for the film in the classics, from Twelve O'Clock High to Citizen Kane to Kurosawa's Rashomon, making his decision to leave the rest a bloated, unfinished mess somewhat questionable.
Humour is a big issue, but perhaps one of taste and flavour, with Johnson going full joker with pilot Poe and, perhaps more controversially, making a mockery of Mark Hamill's Luke, however their arcs at least bear fruit, leaving neither as meaningless as Hollywood's least thrilling space chase, hobbled by its own unforgivable detour; something straight out of the Prequels. Johnson's mistreatment of characters is second only to his utter disregard for others - discarding heroes and villains alike akin to what Fincher did in Alien 3 - but he does still shake things up, and delivers memorable moments which are - independent of the grander whole - highlights in the entire franchise (Leia Poppins notwithstanding). Whilst some are wondering how JJ Abrams will ever put things back together, and others don't want him to even try, everybody can agree that - for good or bad, and perhaps both - Star Wars will never be the same.

The Last Jedi is the first Star Wars film to reach Ultra HD Blu-ray, and thankfully it comes complete with a native 4K presentation which is likely to prove far less divisive than the film itself, taking the already impressive foundation of the 1080p Blu-ray counterpart - itself largely reference - and imbuing it with improved detailing, rich but organic HDR and WCG implementation and the icing on the cake that is Dolby Vision.


Whatever your views of the film itself, the 4K Ultra HD Blu-ray release remains the definitive way to enjoy it

Clarity is excellent, lapping up facial close-ups, taking in the myriad costumes and stunning space craft details, and providing unparalleled sharpness whilst retaining a suitably filmic level of organic grain to add welcome texture to the piece. Whilst HDR and WCG don't ever attempt to melt your eyes, Johnson's stylistic decisions offer a visual opulence ripe for natural implementation of the format's best tools, providing richer, deeper tones that make the oftentimes visually striking setpieces all the more standout, from the crimson Praetorian Guard in the Snoke chamber showdown to the streaking across the white salt planet, kicking crimson red dust into the sky in a formation that would make the Red Arrows proud. Captain Phasma's shiny chrome armour has simply never looked more polished and reflective.

HDR and WCG bring a new dimension to the dominant crimson tones, and black levels are rich and deep, affording a hard-to-fault backdrop for some impressive shadow detail. Whatever your views of the film itself, the 4K Ultra HD Blu-ray release remains the definitive way to enjoy it.


UPDATED 27th April 2020 - Now (re-)released as part of the Skywalker Collection, The Last Jedi gets something of a makeover thanks to Disney's aversion to Dolby Vision, stripping it of the DV and affording a new encode which somehow manages to compete despite this ostensibly drop in enhancement. On direct comparison, it's hard to discern overt differences in the more obvious uses of HDR - sabers and star ship thrusters remain distinctive and prominent and don't appear to drop any of their penetrating glow - and black levels are much the same, perhaps better resolved for those who had a big issue with them, but also still dealing with the same marginally grainy/noisy source material which looks rich and textured but isn't quite in-line with the more shiny and clinical visual approach of the films that bookend this in the trilogy. There isn't anything here to warrant a repurchase, but those who haven't picked up the DV version are also, surprisingly, not missing a great deal.

Star Wars: Episode VIII - The Last Jedi's Ultra HD Blu-ray release offers up immersive audio in the form of an object-based Dolby Atmos track founded upon an already impressive Dolby TrueHD 7.1 core. Disney don't have a great track record when it comes to their home format soundtracks, whether on Blu-ray (Avengers: Age of Ultron) or, most recently, on Ultra HD Blu-ray (the Thor: Ragnarok controversy continues to run), and so the soundtrack to their first Star Wars release on Ultra HD Blu-ray is undoubtedly going to come under a staggering amount of scrutiny, with an as-yet undetermined number of fans either saying that it's a great soundtrack which you just have to listen to at reference levels, or that it's just another badly mastered track that's inexplicably leveled too low.


A fantastic and suitably immersive soundtrack

With strong delivery of the dialogue across the frontal array, the soundtrack really comes alive on the score front and in terms of effects, drawing you into the spectacular set-pieces, and delivering strong dynamics with decent LFE underpinning. From the opening bombing run blowing a hole in your living room (however problematic the space sound science is) to the thunder underfoot of the creatures running amok in the casino sequence, to the incessant space 'chase', there's plenty to keep the surrounds - and the audience - engaged on the aural front, and that's even before we get to the spectacular Praetorian guard scene, which has got to be the best fight scene in all eight movies. The score attempts to maintain tension even when the plotting derails any possible hope of this, nevertheless providing a welcome, strong backdrop for the track which is, barring the fact you'll have to crank it up and play it at reference, a great audio accompaniment.

Although Disney haven't bothered to port anything over to the Ultra HD Blu-ray disc itself (not even the Commentary), the accompanying extras (again, apart from the Commentary) are all on an additional Blu-ray disc anyway, so you would have had to have swapped discs either way. It's a strong selection, bolstered by the aforementioned Commentary, a hearty Documentary and a hefty swathe of Deleted Footage.


A strong selection of extras

The Commentary is with Writer/Director Rian Johnson, affording some detailed insight into his vision of the universe, whilst the feature-length 95 minute Documentary adds visuals to the background material, taking in a vast number of interview snippets and peppering them with behind the scenes clips and shots from the production. It's a great, informative Documentary, and amidst the best that any Star Wars release has seen on home formats. There's a short accompanying Featurette, Balance in the Force, which looks at the motivations of the characters, as well as a trio of Scene Breakdowns and the package is rounded off by a whopping 23 minutes of Deleted Scenes, which are all worth a glimpse even if only a couple are of any modest interest.

UPDATED 27th April 2020 - The Skywalker Collection doesn't afford a completely new set of extras, but does give us a score-only track for the Blu-ray, and a further Porgs extra on the Extras disc, for completists out there.

The first Star Wars film to reach Ultra HD Blu-ray does so in impressive style, with excellent video and audio (the volume of level of which will likely prove controversial as ever) as well as a solid selection of extra features. It's a must-have purchase, even if the film is the most divisive entry of the lot.