Rise or Fall, it all ends here. Thank God. 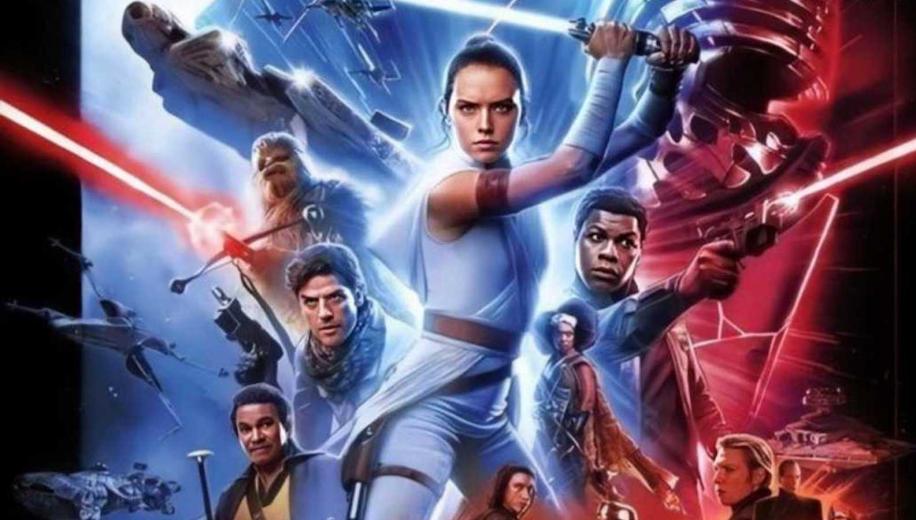 J.J. Abrams contrives to conclude Disney's trilogy in George Lucas' universe, rounding out an up-and-down 9-film series in a scattershot approach to satisfying a demanding audience.

Few franchises come under as critical a gaze as the decades-spanning Star Wars series with it feeling like, at times, you can't possibly hope to please not only everyone, but even a majority. The vocal nature of social media and predisposition to shout louder about flaws than you would about more complimentary remarks - coupled with a far from steady hand guiding this last trilogy - have left the task of satisfactorily concluding not just this three-episode arc, but the grander 'Skywalker' saga it has chosen to become so entrenched by, nigh on impossible. Coming to the rescue, after the somewhat admirable but mostly misguided attempts at doing something different last time around, is Force Awakens helmer and favoured franchise rebooter, J.J. Abrams.

Well, credit to Abrams, he manages to both deal with the problems caused by not being in control of the middle chapter (sometimes quite severely, middle-fingering Johnson's treatment of lightsabers in particular, amidst a whole bunch of other ret-cons) and serve up a fitting enough finale for what is, at best, a messy and thoroughly divisive new trilogy, whilst also attempting - perhaps less successfully - to deliver a franchise-ender to four decades of world building and storytelling across nine movies (and a few spin-offs).

It's an impossible task. It really is. And the insultingly stupid opening scroll (even worse than summarising the Clone Wars) alone should have made for its own movie, re-introducing a character with zero fanfare, and making you wonder whether you'd missed a film somewhere along the way. Likewise, Abrams edits the film to within an inch of its life, on his single-minded mission to tie everything together and get to the end. Indeed, it's interesting being a Star Wars fan - and apologist over the decades - and finding that getting to the end of this saga is very much a relief, rather than a moment of sadness. This isn't the Endgame of the franchise (even though it ill-advisedly apes it frequently, which rather dramatically shows just how much impact the equivalent moment had after a proper build-up, as opposed to the paltry imitation here). It doesn't make you wonder where they will go from here, and whether there's some hope to see more from this universe. It frequently makes you glad that this is it.

It's an ending, which is a massive accomplishment in and of itself.

Clearly, there are some spectacular moments - Abrams uses all of his Jedi forces and mind-tricks to revert the damage done last time around, turning his magic on Rey's parentage, Kylo's story arc, Leia's sacrifice(s), and even attempting to use franchise fan favourite characters more wisely this time out of the gate. He hits the mark when it comes to the Rey-Ren relationship, which was arguably also the best part of Last Jedi, capitalising on their force connection and driving them together in some fabulous and perhaps even inspired moments of force power usage. Pointedly, Driver's Ren is arguably the only character you vaguely care about (Daisy Ridley's Rey lost most of her spark after Force Awakens, and the 'twist' ending has zero impact), but at least their interaction works.

Beyond that, though, it's madness as usual, with Abrams going distinctly Besson/Valerian when it comes to his scenery-hopping early act nonsense, throwing space horses in literally just because, unnecessarily introducing, not only a new overlord, but also a new weapon which - just like the old Death Star(s) - has its usual easy-to-hit fatal flaw. The Nazi-like Order go from First to Last incomprehensibly, the Resistance multiplies like bunnies equally incomprehensibly, a few more of Poe's jokes hit home, Finn continues to amble around with little purpose (considering how he landed in this series), and C3-PO gives the film a head-smackingly unnecessary diversion which, you would have thought after Johnson's casino planet trip, Abrams would know well to steer clear of.

The simple plotting beneath of light and dark coming full circle, and forces from both raging up for a final battle, should have been kept to the fore because that was when this series was at its best, and it's when the film is at its best, with Disney and Abrams throwing the kitchen sink at an attempt at an epic, impactful conclusion (Endgame, Winter Soldier, bloody Independence Day and all of the Star Wars films themselves of course - it's all in there) but often only highlighting the fact that its largely unearned this time out of the gate. There's simply no substitute for knowing where you're going right from the outset in a trilogy, and The Rise of Skywalker is, in no way, where Force Awakens was headed - even before it took a Last Jedi diversion. Still, it's an ending, which is a massive accomplishment in and of itself, and it delivers just enough to those who have endured the good and bad and are back here on sheer goodwill.

The Rise of Skywalker 4K Video

Star Wars: Episode IX - The Rise of Skywalker comes to UK 4K Blu-ray as part of the lavishly-packaged "Complete Skywalker Collection" as well as in a standalone 3-disc set. Shot on film (some scenes even on 65mm), the glorious native 4K Digital Intermediate is what forms the basis of this Ultra HD Blu-ray release.

Well, as much as it's been an up-and-down ride when it comes to the films themselves, the video presentations have proved something of a rollercoaster too; a messy start with The Phantom Menace in 4K, better consistency for the 4K of Attack of the Clones, and the best-looking of the prequels with Revenge of the Sith in 4K; then the new 4K presentation of A New Hope proved spectacular, whilst Empire Strikes Back and Return of the Jedi were more of a mixed bag in 4K, with this new set of sequels initially impressing with A Force Awakens in 4K, but hitting a more divisive Last Jedi 4K presentation before we get to this - what has to be arguably the best of the entire collection - a staggeringly impressive native 4K presentation of the most recent feature, The Rise of Skywalker.

Detail is outstanding, enjoying the weathered textures of the various outfits, particularly evident during the desert sequences, whilst environmental nuance reaches a different level during the storm sequence, where the crashed and particularly destroyed environment displays a sublime level of intricacy and gradiated depth. Skin textures are pleasantly resolved, the hair on Chewie has a nice lived-in, shaggy-dog feel, and overall it's just plain excellent.

HDR and WCG bring you rich and inky blacks which remain a noteworthy step up over the last entry's 4K release, and a broad range from those inky depths through to the bright peak whites, allowing the lightsaber effects to - unsurprisingly - stand out head and shoulders above the rest, although all of the finer touches and background settings get a more vibrant look, even the desert sequences, or the near-monochromatic storm scenes, with the palette more than prepared to push the envelope in whatever direction the cinematography sees fit. It's almost impossible to fault; an excellent, demo and reference presentation.

The Rise of Skywalker 4K Audio

All of the previous Star Wars chapters have enjoyed the Dolby Atmos upgrade on their 4K bows, and The Rise of Skywalker is no exception, marking a high point in the set. The 3D Hi-Def object-based immersive audio track brings an expansiveness to the mix which is simply lacking on the Blu-ray's Master Audio 7.1 counterpart, although there's no denying that the usual Disney tweaking is required when it comes to volume settings (they're kind of the polar opposite to DTS's "IMAX-enhanced" boomstick tracks.

Glorious, allowing you occasionally to even forget just how much of a messy ride it's been, and instead enjoy the spectacular set-pieces in the moment

Dialogue comes across clearly and coherently throughout, given fine prioritisation across the frontal array, whilst the score, which has some glorious moments, provides a sweeping and at times engulfing background to the proceedings, allowing you occasionally to even forget just how much of a messy ride it's been to get here, and instead enjoy the spectacular set-pieces in the moment. Effects bring discrete presence to the blasts, LFE adds weight to the destroyers, explosions, and space battles, and even a low end rumble to the lightsaber clashes, with a multitude of other diverse and nuanced effects crowding out the array and leaving a detailed and expertly crafted soundscape which, if set to the right volume level, impresses quite considerably.
﻿

The Rise of Skywalker 4K Extras

Maintaining the trend across the set, The Rise of Skywalker's 4K disc is bare bones, however, its Blu-ray counterpart is also lacking in even the Commentaries that we got before, with thankfully the second Blu-ray - a dedicated extras disc - more than making up for any deficits.

It may not seem like much on paper - a Documentary and a few satellite Featurettes to embellish it - but this is a surprisingly excellent extras package. That Documentary is actually feature length, and then some, clocking in at over 2 hours in length, and deep diving not only into the production of this fateful finale, nor the sequel trilogy, but actually the entire 9-film voyage, reflecting on all the key elements (of which there were indeed many) that were drawn from before to revisit here in the conclusion (aka fan service). For fans, it's an unmissable watch.

The Rise of Skywalker 4K Verdict

Star Wars: Episode IX - The Rise of Skywalker is really the best we could have hoped for after the last two movies took such different directions from one another, preventing this sequel trilogy from ever feeling like it had a cohesive, unified voice. It's unforgivable, really - hell, even with its problems, at least Lucas's Prequels felt like they'd been somewhat thought out in advance; this one appeared to turn on a dime, on the whims of a demanding fanbase; the shifting seas of fan loyalty dictating the direction more than any director or writer involved - of which there clearly have been too many anyway. With all that in mind, this is as fitting a finale as could have been expected, under the circumstances, delivering some strong conflicts, impressive force powers and fan service (whatever that no means) galore. And, when all is said and done, at least it's all over now. Who would have thought that would come as such a damn relief?

Fans who've come this far will find this absolutely unmissable, even if they may never watch it again

Disney's 4K Ultra HD Blu-ray release of Star Wars: Episode IX - The Return of Skywalker is a spectacular standalone release, and a standout entry in the entire set, arguably the best of the entire lot, old and new - native 4K video and stomping Atmos (dialled up, that is) leave it technically superb, and a fabulous documentary round out the package. Franchise fans who've come this far will find this absolutely unmissable, even if they may never watch it again.