"You were the chosen one. It was said that you would destroy the Sith, not join them. Bring balance to the Force, not leave it in darkness." 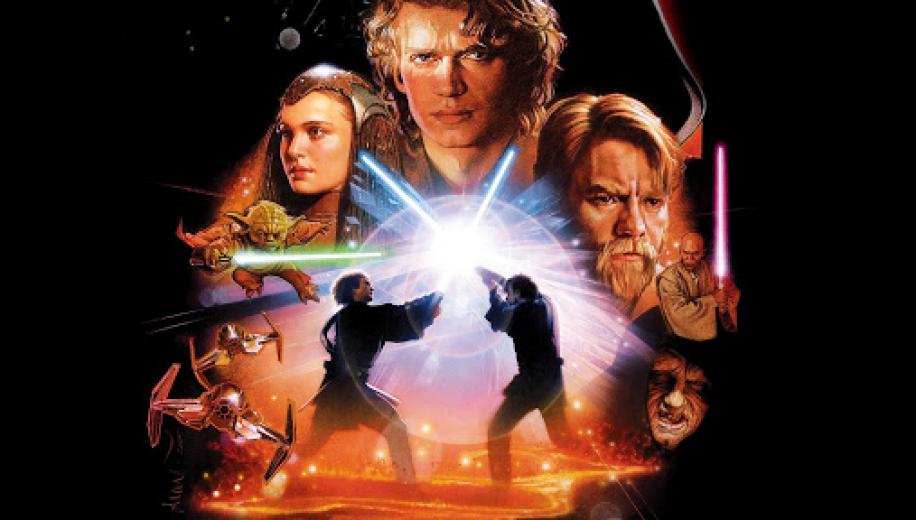 Finally the prequels hit the mark with this darker final chapter that is packed with fateful, memorable confrontations.

For all the wasted time in The Phantom Menace and Attack of the Clones - as well as the unforgivable omission of the actual Clone Wars themselves - Star Wars broke into PG-13 territory for the first time with this much more violent entry, which had to work some seriously contrived Jedi mind-tricks to tie itself into the start of A New Hope (unlike, say, Rogue One, which effortlessly worked as a near-perfect prequel), but nonetheless finally delivered the goods as it viciously decimated the Jedi ranks and cast the universe into darkness.

Upping the pace and changing the tone considerably, Revenge started down its dark path with a deadly confrontation between Anakin and Christopher Lee's Count Dooku, and maintained some strong seed-planting thanks almost entirely to Ian McDiarmid's excellent work as the manipulative Palpatine, sliming his way into the Senate and, more importantly, into Anakin's confidence, and then, finally, pushing the gullible, angsty moron over the edge when necessary. There's still some innate stupidity, mostly thanks to Christensen, but even he's on better form, instead largely hampered by a script (and editing - as Lucas changed his mind about motivations in the editing suite) which saw his fallen Jedi go from doubt, disbelief, and a desperate desire to save his wife that would make him protect the powerful man who says he can save her at all cost, to callously executing Jedi children for no apparent reason, in the space of a few incomprehensible minutes. Decisions like this remain head-scratchingly bad, but Lucas somehow still just about gets the job done, in part thanks to the supporting cast and some undeniably strong set pieces - as well as the sheer death toll, not least courtesy of the snapshot of Order 66 in its full, devastating, effect.

Ewan McGregor is still the standout of the prequels.

Ewan McGregor is still the standout of the prequels, cementing his position here with an excellent final turn as Obi-Wan, finally showing us the Jedi Master and Clone Wars General at the height of his capabilities, as he not only takes on the vicious General Grievous (a franchise-great villain utterly wasted here - another unfortunate casualty of the Clone Wars omission - and only really fleshed out in the 2003 Tartakovsky series as well as the more recent Disney show) but then has to face off against his Padawan and brother-in-arms Anakin. Doing the heavy lifting in terms of acting (particularly opposite Christensen), and pulling off some of the best action too (the final lightsaber face off rivals Duel of the Fates in Phantom Menace for the top spot of duels in the entire series), you could almost strip every Obi-Wan scene out of the prequels and construct one hell of a good film just from them.

The remaining Jedi are mostly (literal) cannon fodder, which is a little shame (the Clone Wars cartoons and expanded universe have consistently attempted to rectify this), but their fates still hit home, and Samuel L. Jackson's Mace Windu confrontation with Palpatine is pretty superb too, even if it's only a narrative heartbeat away from the subsequent children-slaying sequence that almost single-handedly ruins the whole descent. Yoda gets some good screen time too, doubling down on his Dooku clash with an epic battle with Palpatine himself, undercut only by a randomly abortive ending, where his character crawls away to Dagobah for little reason other than... because that's where we find him in the next movies. After defeating Grievous and Anakin, it seems like the most ridiculous decision in the world for Obi and Yoda, but the logic Force wasn't really strong in Lucas's rationalisations otherwise Padme wouldn't have just - literally - given up the will to live.

Indeed, it's amazing that, despite the flaws, Lucas crafts a compelling tale of pure Shakespearean tragedy, killing his way to the rise of Vader, and drawing the viewer along for this ride, warts and all. If you really want to get hung up on the scores, Phantom is closer to a 6.5 and Revenge closer to a 7.5, but there is definitely some distinction between the two, with this the best of the prequels by some margin; less divisive than the sequels and maybe even better than the one with the Ewoks, not that many would dare to admit it. Nothing can top Rogue One, really, but of all the other 'added' movies, Revenge is up there with the best, and - if the other two prequels had been done properly, could have provided a fitting conclusion to a much more memorable prequel trilogy.

Revenge of the Sith 4K Video

Star Wars: Episode III - Revenge of the Sith comes to UK 4K Blu-ray as part of the lavishly-packaged "Complete Skywalker Collection". It was the second digitally shot Star Wars entry, and the resultant 2K Digital Intermediate is what forms the basis of this Ultra HD Blu-ray release.

A very strong presentation, with just enough highlights to edge a demo score

The Phantom Menace in 4K was a messy affair, whilst Attack of the Clones in 4K was surprisingly impressive by comparison, especially considering the digital limitations of the early-digital filming process. By the time of Revenge, however, the technology had finally caught up with Lucas' vision, and the results were much more spectacular, with a fully realised Star Wars landscape absolutely packed to the brim with stunning set pieces across myriad, diverse, alien environments. Neither the Original Trilogy - constrained as they were by budget and the effects of the time - nor the latter, more grounded Sequel Trilogy, was as impressive at world-building, and Revenge was the pinnacle of Lucas's efforts in this respect.

All of this, thanks to the better Digital Technology of the time, translates very well to the 4K format, blowing the mixed bag Phantom 4K rendition and the stronger but still flawed Attack 4K presentation out of the water, and boasting some welcome demo flourishes which are amidst the best - if not the best - in the entire set.

Detail is excellent - there's no way you'd believe the source video was capped way below 2K - from Obi-Wan's textured samurai robes to the intricate nuances on Grievous's multi-limbed cyborg body; from the stunning space battle sequence that the film opens with - the level of nuance on offer here is jaw-dropping - to the increasingly strained and battle-worn visages of all the key players. And that's just the start of it.

If you thought HDR and WCG were a little under-utilised in the first two prequels in 4K, you'll likely have no such sentiments about Revenge. From the multiple spots of neon intensity during the space sequence to the superb explosions (a far cry from those in Attack), and that's even before we come to the highlight - the lightsabers - which sear the screen with a hitherto unseen intensity courtesy of HDR implementation that's again, not just a high in this 4K box set, but arguably a high on the format itself. Crush is still an issue, but not a big one, and effects are considerably better integrated. Even the Dolby Vision-blessed 4K variation on Disney+ can't compete with the highlights on offer here. Yes, people are going to complain about the source material and be cynical over the sorcery which must have been implemented to bring it up to snuff, but this is a very strong presentation nonetheless, with just enough highlights to edge a demo score.

Revenge of the Sith 4K Audio

As with Phantom and Attack before it, the Dolby Atmos upgrade here is a high point on the disc; the high-definition 3D object-based immersive audio that Lucas's visionary sci-fi action landscape simply demands, affording an expansive presentation of the epic space battle, and the various superb clashes, booming with a threatening LFE component, and soaring with the intensity of the returning Duel of the Fates theme from Phantom.

Dialogue gets fine priority across the frontal array, rising above even the most chaotic maelstrom crafted in the piece. The score is a step up over Attack, mainly thanks to the returning themes used here - giving a grand scale to the Mustafar clash - but also because it enjoys the darker and more mature tone of the piece, getting fabulously resonant dissemination across the soundscape. Effects are, of course, the highlight here, and it's a busy, busy action extravaganza, buzzing with energised blaster shots, or the searing electrically intense crackle of the lightsabers, the whizz of star fighters or destroyers pounding into the landscape with an LFE boom. It is utterly immersive, wholeheartedly engulfing and an aural high point in the disc and franchise.
﻿

Revenge of the Sith 4K Extras

As with the last two 4K releases, there's nothing on the 4K disc itself, however the accompanying Blu-ray similarly contains a pair of old Commentaries, and the dedicated extras disc provides both old and new offerings, and rounds out a package that is possibly the most impressive of the entire set.

Possibly the most impressive of the entire set

As per, there's a Lucas-led Commentary, and a further Cast and Crew Commentary, as well as the longest feature-length Making-of Documentary of the releases so far, clocking in at almost 80 minutes, and embellished by further Featurettes that offer a prequel-trilogy-capping reflection of the first 6 films, with some insights into some of the choices made for Sith, and how it could have taken a different course, a VFX-esque reel, a horde of Deleted Scenes, a bevy of Interviews and a hefty Gallery too.

Star Wars: Episode III - Revenge of the Sith is easily the high point of the prequel trilogy, and up there with the better entries in the entire franchise whole. Sure, it still has to contend with some painfully contrived plot choices, but even Lucas' writing can't ruin the sheer emotional weight of some of the decimation on offer as the Jedi Order is wiped out and the Sith Empire rises. Chock full of climactic clashes and memorable set pieces, it's only a shame that it couldn't really make up for what was missing from the last movie(s) - nor fill the void that was the missing Clone Wars. Still, between McGregor's Obi-Wan, Anakin's full throttle Vader, and basically all of the Force characters unleashed, it affords a hell of a ride.

Disney's 4K Ultra HD Blu-ray release of Star Wars: Episode III - Revenge of the Sith is a standout in the entire set, better than the 4K presentations of The Phantom Menace and Attack of the Clones, and possibly even more impressive than the Original Trilogy, although we'll wait for a full dissection of those before ruling on that. The Atmos track is outstanding, and the extras comprehensive. Fans should be most pleased.