"If you are suffering as much as I am, please tell me." 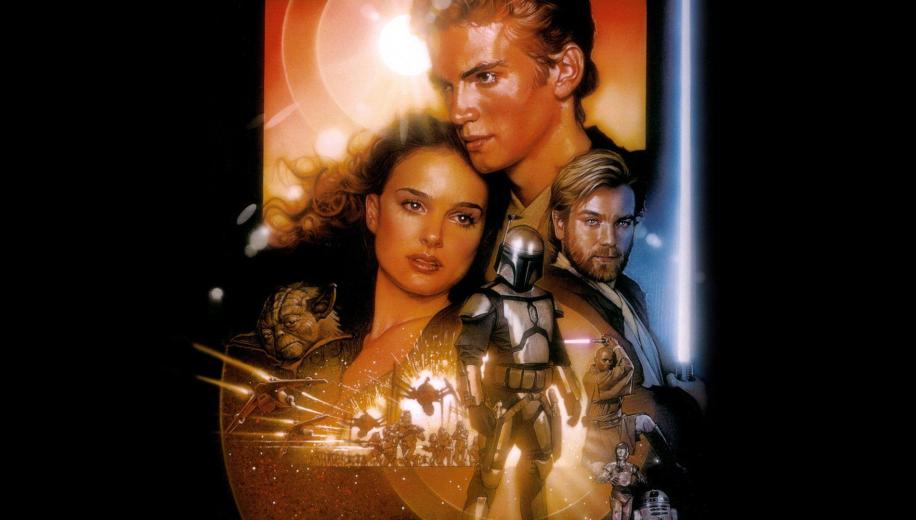 What could have been a great movie about arguably the greatest untold era in Star Wars lore - the 3 year Clone Wars - was instead another anticlimactic prologue replete with head-smackingly bad romance and some of the most wooden delivery in a saga hardly known for its acting.

Somewhere, in a galaxy far far away, there's a film that starts with a young master Jedi and his precocious and arrogant Padawan chasing down a lead on the new emergence of the Sith, encountering a fallen Jedi who refuses to turn back from the Dark Side, and who sparks off a war between the Separatist droid armies and the Republic clone armies which tears through the universe, stretching the previously peaceful and honourable Jedi warriors to breaking point as they try to command men across an impossibly vast arena, in battles where, no matter the outcome, the mastermind behind them was sure to win. Rather than Rogue One, the sequel to The Phantom Menace had the opportunity to be the first to actually put the Wars into Star Wars. It was simple, all Lucas had to do was actually make a film about the fabled "Clone Wars" which were first teased back in '77's A New Hope.

Alas, that was not to be. Instead, we got some of the worst, most stilted, chemistry-less romance in the history of cinema. Trite dialogue. Wasted talent. A promotion for Jar Jar Binks. A Jedi Padawan who defeated a Sith warrior, now turned supposedly wise Master who gets beaten, outwitted and trapped at every turn, and is ultimately bested by a fallen Jedi OAP we've never met before. An actor who somehow managed to perfectly embrace an adult version of Jake Lloyd's wooden child acting as Anakin, and run with it to remain somewhat unbelievably monotone for almost the entire movie - enter Hayden Christensen. Oh, and Yoda turning into Sonic. Because, well, it was either that or make R2-D2 fly.

Short of skipping to the last act and watching it as a prologue to the far superior Clone Wars series, this is a contender for the nadir of the entire Saga.

Unlike The Phantom Menace, which could have been forgiven its flaws with a strong sequel building on the foundations that had been laid, Attack of the Clones was a cumbersome, numbingly long 142 minutes of almost overwhelming disappointment. It's a shame, really, because this was where the Jedi finally came to the fore, with the standout battle of Geonosis, replete with grandstanding effects that made the battle of Naboo pale into insignificance, still largely anticlimactic when it should have been a fist-pumpingly iconic moment.

The highlights? Well Ewan McGregor rose to the challenge of playing a grown-up Obi-wan, showing considerable distance from his Padawan years and fighting some awful scripting and storylines to stand out in a strong skirmish with an otherwise wasted Jango Fett, continuing his thread of being one of the best characters in these prequels - and arguably in this universe. Christopher Lee is an inspired choice for Count Dooku, despite having zero build up, a wasted reveal, and little to do considering they ultimately just skip the Clone Wars and seal his fate in the opening few minutes of Revenge. Samuel L. Jackson's Mace Windu similarly gets to kick some ass, and seeing a band of Jedi in action is nice, if again disappointing when you consider what they really could have done had they explored what happened next. There's more action, less tax chat, and even more magnificent worlds to explore (Kamino is stunning). And the story may have been halfway tolerable with a better Anakin, but Christensen is such a charisma-void that you'd probably be better off watching this dubbed with subtitles. Short of skipping to the last act - itself almost feature-length due to the bloated runtime - and watching it as a prologue to the far superior Clone Wars TV series, this is a contender for the nadir of the entire Saga.

Attack of the Clones 4K Video

Star Wars: Episode II - Attack of the Clones comes to UK 4K Blu-ray as part of the lavishly-packaged "Complete Skywalker Collection". It was the first of the prequels - and one of the first major blockbusters - to be shot entirely digitally, and the resultant 2K Digital Intermediate is what forms the basis of this Ultra HD Blu-ray release.

After The Phantom Menace, Attack of the Clones is a pleasant surprise in 4K

After the hot mess of The Phantom Menace - at least in terms of its 4K presentation - Attack of the Clones - at least not in terms of the actual film - is something of a very pleasant surprise in 4K. Unlike Phantom, which largely suffered from the failings of the source elements, and how the film and digital elements had been previously combined, Attack's pure digital presentation translates to 4K much more seamlessly and consistently.

Sure, the colour scheme is still remarkably bronzed, and some of the characters have that slightly cartoony edge which reared its head on Phantom, but by and large, it's impressive. Detailing - from Jango to Yoda to the Clones and the colourful new worlds - is excellent. The entirety of the time on Kamino is an utter wow factor, from Kenobi's first meeting with Jango to the moment where you get a glimpse of the multitude of clones picking up their helmets, or the fabulous movie high-point of the fight in the rain on the landing pad.

HDR and WCG bring penetrating glow to the sabers as well as those purple neon-hued energy weapons utilised in the final battle, delivering solid black levels and superb colour depth. Again, it's a noticeable difference to even the Dolby Vision-blessed 4K offering on Disney+, defeating the streaming equivalent conclusively. And the pure-digital source leaves the effects so much easier to blend in, becoming a showcase of still-impressive visual effects that appears positively light-years ahead of its at times almost pre-viz-standard predecessor. Problems? The CG explosions and flames don't quite enjoy a natural depiction in 4K, often standing out as the most obvious 'effect', Anakin riding that buffalo looks likes something out of Escape from L.A., and that aforementioned cartoon quality seeps into a couple of shots. But it's such a step up over Phantom's 4K that it would be surprising to find any fans who aren't content that this is by far the best the film has ever looked.

Attack of the Clones 4K Audio

As with Phantom, the Dolby Atmos upgrade here is hard to fault, translating the busy, effects-driven sci-fi action fantasy into an aural spectacle courtesy of the high-definition 3D object-based immersive audio that this kind of material was simply made for.

Whatever your feelings as to the movie, it sounds absolutely superb

Dialogue is afforded priority across the piece, even if that may not be a blessing when it comes to the woeful interaction between Christensen and Portman - the former reading his lines as if in a coma, and the latter as if she'd been blackmailed into the 'relationship' that awkwardly unfolds. The score is nowhere near as impressive as last time out, but still has some enduring moments, and gets the deluxe treatment; resonating across the array, whilst effects are myriad and expansive, from the manic Fifth Element-style chase through Coruscant to the perpetual perfect storm of Kamino, to the booming detonations of the epic battle on Geonosis. Whatever your feelings as to the movie, it sounds absolutely superb.
﻿

Attack of the Clones 4K Extras

As with Phantom's 4K release, there's nothing on the 4K disc itself, however the accompanying Blu-ray similarly contains some old Commentaries, and the dedicated extras disc provides an even more extensive set of supplemental features, both old and new.

An extensive set of features, both old and new

Beyond the Lucas-led and cast and crew Commentaries, almost 2 hours of background Featurettes and Feature-length Documentaries make this an absolute must-have package for dedicated fans, revelling in the effects, the digital process, the character design and the visual landscapes crafted. If that's not enough we also get a VFX breakdown, a host of archival Interviews, some extensive Deleted Scenes and a huge Gallery.

Attack of the Clones 4K Verdict

Star Wars: Episode Ii - Attack of the Clones is more quickly forgiven than its predecessor because it ups the action, drops the taxation, and drops the saga into pre-Clone Wars mode, but really it's just an unnecessary, misguided appetiser for the real story that's never been told - at least not in live action media - sacrificing the considerably more interesting and eventful Clone Wars in favour of a painful exploration of just about the worst (and worst acted) love story in any galaxy. McGregor's Kenobi is still a strong point, the worldbuilding even more impressive this time out, and the introduction of dozens of secondary Jedi characters into the battleground is still something approaching an iconic saga moment, however it's just about all tainted by the feeling of anticlimax and wasted opportunities.

Unlike The Phantom Menace, where the standout - and in some cases, saga-topping - moments might at least give you pause as to whether you can sit through Jar Jar Binks to get to them, Attack of the Clones is ruined by the perpetual charisma-vacuum of Christensen and is thus probably best enjoyed watched only for its final act, and even then only to set the stage for the infinitely better Clone Wars cartoon series. The saving grace? Now we have seven seasons of that to wash away the bitter aftertaste.

Disney's 4K Ultra HD Blu-ray release of Star Wars: Episode II - Attack of the Clones is something of a return to form after Star Wars: Episode I - The Phantom Menace in 4K, and marks a significant step up in terms of 4K visuals, affording a much more consistent, impressive presentation that enjoys its pure digital source and tops off a strong 4K rendition with excellent HDR that tops Disney+'s faux Dolby Vision in a heartbeat. A stomping Atmos track furthers the technical joy, and an excellent extras package rounds out the trifecta, leaving this a superb upgrade for fans, even if ultimately this is a strong contender for the worst entry in the entire Star Wars saga.