This is the 3D that we were looking for 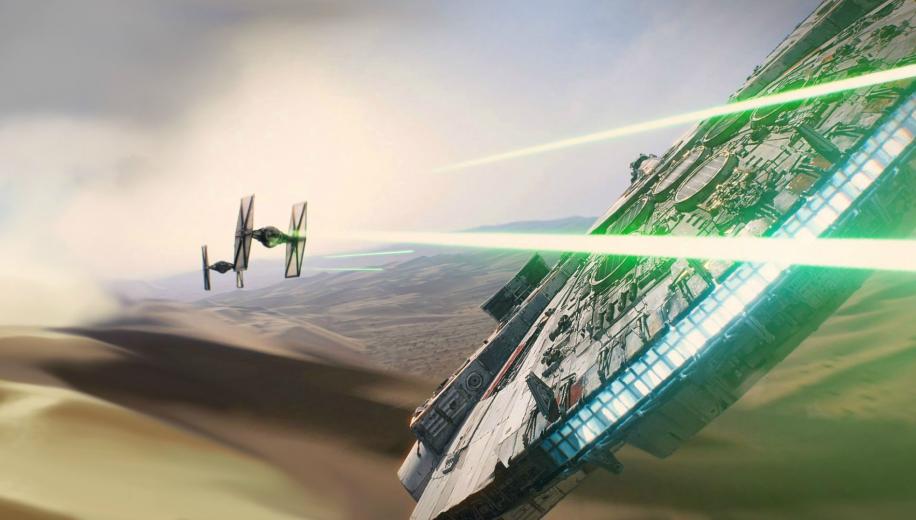 Star Wars: The Force Awakens was undoubtedly better than anybody could have ever expected after the last trilogy, with J. J. Abrams’ resoundingly good reboot breathing new life into this classic franchise.

Yes, in typical Abrams style, this is a heavily tribute-laden feature that’s very familiar, and often overly so for many older fans of the franchise. It does tread old ground, revisiting recognisable Star Wars themes – themselves borrowed from Kurosawa’s Hidden Fortress – and follows many similar marker points involving droids carrying information, secret plans, planet-destroying weapons, and bombing runs to destroy said weapons. It gives us a new young innocent (or maybe two?) to graduate into the ways of The Force and waves off an old veteran in the process. Those who can’t see the similarities probably need their eyes checked. But, by the same token – and in the same way he did with Star Trek, the first time around, Abrams’ forte is in giving this familiar material a fresh feel and a new lease of life; introducing a whole new generation to this decades-old universe whilst reminding long-cynical veteran fans of what it’s like to be a child again.
Key to the old comes the presence of hallowed elements like the Millennium Falcon and Harrison Ford’s Han Solo, the former of which gets to whip around some spectacular aerial sequences whilst the latter reminds us why another Indiana Jones may not be so out of the question. It’s the new blood that truly impresses though, with the villainous Kylo Ren proving a formidable opponent (until Adam Driver’s face is revealed, that is) and the two new leads – a bumbling, means-well John Boyega (not a million miles away from the kind of role a young Harrison Ford would take) and a kick-ass heroine in Daisy Ridley’s Rey – showing us the future of this trilogy. Undoubtedly Rey (with Ridley looking strikingly like a young Keira Knightley) is the strongest female action character we’ve had in years, and it’s nice to think of her being an icon for a whole new generation, and potentially as pivotal a character as Hamill’s Luke was all those decades back.

As per my review of the original 2D release of The Force Awakens this Collector's Edition appears to be identical in that respect, promoting the unquestionably spectacular blockbuster sci-fi event with a glorious High Definition 1080p/AVC-encoded transfer, framed in the film’s original theatrical aspect ratio of 2.40:1 widescreen.

It's the 3D variant that we've come here for, and it doesn't disappoint, as those who managed to enjoy the movie theatrical in 3D will already be able to attest to. Time and effort has been put into crafting a jaw-dropping 3D extravaganza, and the results are mostly just that. And whilst this release may not give the format a new lease of life, it does remind us why it continues to endure, even on the eve of UHD leaving it out in the cold.

Whilst 3D naturally makes for a slightly darker experience, The Force Awakens is far from a dull, dark picture, and seldom suffers as a result, instead benefiting from the added dimension with tangible layers and palpable depth. It's not just the standout aerial sequences which look striking either, as Tie Fighters spin in and out of focus and The Falcon pulls off unexpected manoeuvres; not just the tech wizardry, as Prometheus-style maps light up as if holograms within your own living room; but actually even on the close-ups during the lightsaber sequences, as the faces of characters are part-lit by a glowing streak of energy that pulses with impressive texture - full of depth and dimension. The less CG-driven sequences are, understandably, not quite as stand-out, but there are more than enough well-rendered 3D effects to make for a very immersive experience indeed. It may not be the reference perfection of the 2D counterpart, but the 3D variant is unreservedly demo worthy nonetheless.

Although we still haven't received an upgrade in the sound department - many will cry out this is yet another missed opportunity at embracing Dolby Atmos - thankfully the original DTS-HD Master Audio 7.1 track was always reference quality anyway, so it's only a select few that are actually missing anything by not getting the object-based upgrade.


Although no upgrade here, the original track was largely reference anyway

As per my original review of the 2D release, the reality is that The Force Awaken’s soundtrack is almost impossible to fault. Comparing it to the likes of Mad Max: Fury Road may leave it falling short of the best of the best, however it’s outstanding nonetheless, with firmly prioritised dialogue, dynamic effects usage disseminated across the array, and that seminal score and theme underpinning the whole affair. Again, easy demo material, and despite reservations that many may have over whether this could have been improved - particularly given that this release is already a double-dip - it’s still a largely reference rendition. This Collector's Edition boasts not only all of the extras from the original release, but also a whole swathe of new ones. It's headlined by an excellent Audio Commentary, on the 2D release, by Director J.J. Abrams, who talks in depth about almost every aspect of the production, from the real sets and the effects to the changes made to the story and background to key characters. Fans will love this.

The rest of the extras are housed on the bonus disc, with a number of them likely to prove unmissable for fans. There's a trio of short new Deleted Scenes to add to the old ones, although still nothing that should have been left in; whilst the majority of the rest of the disc is devoted to Featurette-based material. Foley: A Sonic Tale, and Sounds of The Resistance both look at the sound design in some detail, whilst Dressing the Galaxy and Inside the Armory look at some of the costumes and weapons designed for the film. Perhaps the best extra on this disc, however, is the Conversation with Daisy Ridley and John Boyega, The Scavenger & The Stormtrooper, which is a fresh little addition to the behind-the-scenes material.


The Collector's Edition package is impressive

The remaining features are those from the previous release - the sizable Secrets of The Force Awakens: A Cinematic Journey Documentary; The Story Awakens Table Read; and the Featurettes: Building BB-8, Crafting Creatures, Blueprint of a Battle: The Snow Fight, John Williams: The Seventh Symphony, and ILM: The Visual Magic of The Force, as well as the Force for Change global aid segment.

The package itself is just as impressive, a fat boxed release, housed with an exterior framed lenticular image that makes a nice touch. The fold-out set boasts some well-chosen artwork, and makes for a great Star Wars: The Force Awakens package.

If you hadn't already bought The Force Awakens, then this would be the set to own

This likely won't be the last release of The Force Awakens, with options to eke it out into a further Dolby Atmos Blu-ray release, and then a latter UHD release, should they want to milk it for all its worth - and that's even before the ultimate collector's set which will appear at the conclusion of the trilogy and boast even more magically 'unearthed' special features that they definitely weren't holding back from these sets. But at least this Christmas-prepped Collector's Edition has some value to it, not least in the well-rendered 3D option, but also in the enhanced extras department. If you hadn't already bought Star Wars: The Force Awakens, then this would be the set to own, but since there's nobody left on the planet without a copy, it's likely that only those who are minded to watch it in 3D will pick this up. For those, it comes recommended.