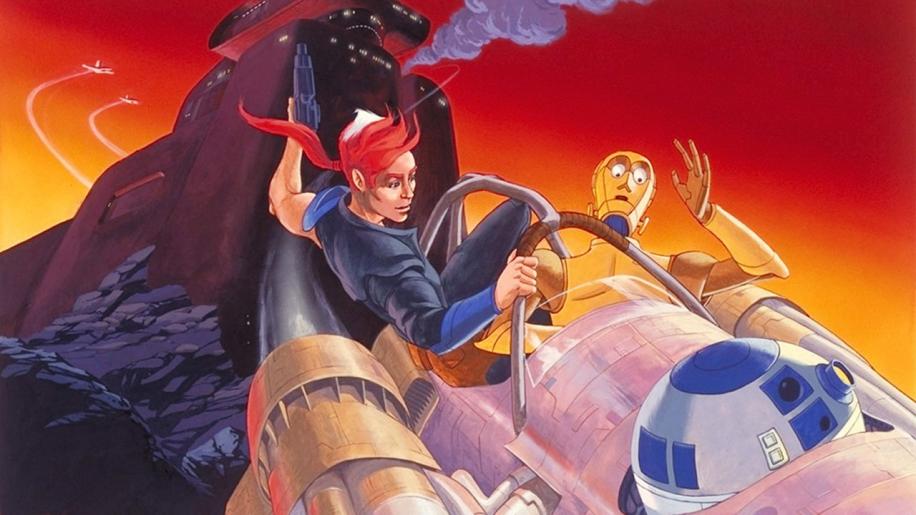 Fox's disc comes full-frame 4:3 and without the THX banner of approval. The first thing I noticed was the vibrancy of the colour - it doesn't exactly scorch the screen and drip with re-mastered sheen but it will infuse your living room with a nice cosy Scooby-Doo-ish glow. There is the occasional trace of over-saturation and little bit of bleeding of the reds, aptly enough. The image itself suffers a fair degree of grain, never anything to detract from the show really, but it does create a somewhat dusty and cluttered picture throughout. The overall presentation is quite soft as well, but the animation is pleasantly big and blocky so whatever detail you may think is being lost in the murk probably wasn't there to begin with. This stuff is twenty years old now, so don't expect miracles, even though it's from the prestigious Lucasfilm stable.

But what is a little disappointing is the artefacting present on the disc which was apparent numerous times throughout. Throw in a little pixilation here and there that, on the check disc anyway, manifested itself mainly in the desert sequences, and some lapses in edge delineation marring some background characters and you've got a transfer that has more than its fair share of problems. However, none of these shortcomings are actually that bad once you get into it. I mean, this is not a full-on glorious digital transfer of obvious DVD nectar like Attack Of The Clones or, waiting with bated breath, Revenge Of The Sith so, in my opinion, all this can be forgiven. The intended audience is hardly going to complain. With a very limited Dolby Digital 2-channel surround mix you can be assured that your speakers will not be taxed with this disc. Although robust and always clear, I found that the sound rarely strayed from the front and centre. Occasionally there would be some separate left and right activity but, on the whole, the disc presents itself strongly and consistently from a unified front. The subwoofer was hardly ever touched and despite lots of system tinkering the rears were left to virtually sit this one out. Again, I'm not surprised and I certainly didn't expect anything spectacular. The disc does the job at hand fairly well and without any hiss or crackle. That's okay with me. However, I feel compelled to add that the score by Marco D'Ambrosio is absolutely horrible and very, very repetitive. And, yep, it is handled quite strongly which, for once, is unfortunate. Well, despite some reservations I found that once I got into it, The Animated Adventures Of Droids was actually quite good fun. The animation is very much of its time - big, bold and dependent more on caricature than detail or style. The space scenes are the cartoon equivalent of those seen in TV's Buck Rogers in the 25th Century but the action is wisely set mainly on the ground. The characters, despite some references, are so far removed from the conventional Star Wars universe so as not to interfere with it and, as such, do not detract from the lore we have become accustomed to. However, it is best to view these adventures as merely interesting sidelines. A couple of characters you know thrown into the comedy dimension for a little while. Just a bit of fun, really and there's no harm in that. It's interesting to note though, that my dislike of the droids in the movies didn't spoil my enjoyment of their capers here as ultimately those pesky droids won me over! However, if you are a Star Wars fanatic then you simply must get this. If not - and you don't have small children that would certainly be entertained by it - rent or borrow first. If you don't like it, it's a given that you won't learn to.

Fox's disc is pure vanilla. The AV performance is probably all we should expect from an old TV cartoon but I hope that the digital defects displayed in the transfer were unique purely to the check disc and not the retail copies.