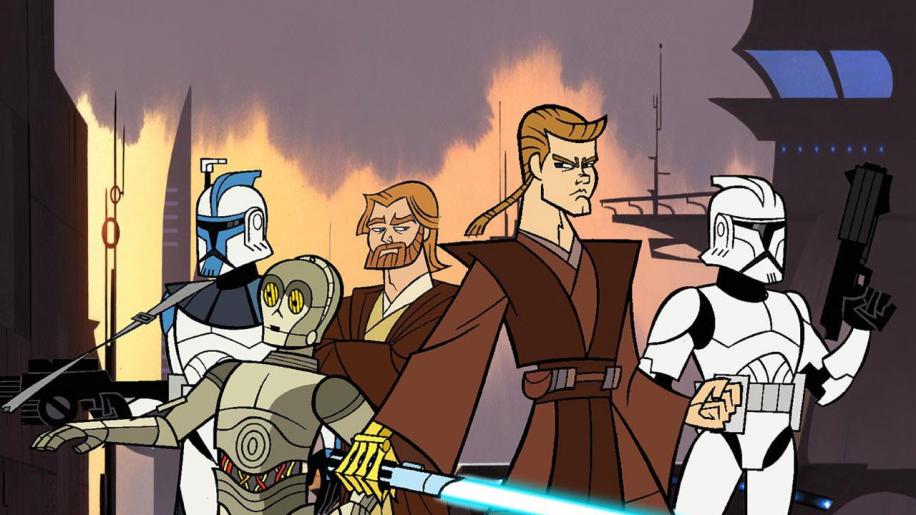 Fox have presented a 16:9 aspect anamorphically enhanced for widescreen TV's picture with an average bitrate of 3-6Mbps. The show uses a limited pallet, concentrating on bold primary colours, and these are faithfully represented. Reds, Yellows, Blues all shine off the screen, contrast and brightness are well represented with black being very deep and true. No compression problems or edge enhancement either. Excellent as this picture is it doesn't have that lustre I associate with a perfect score, contributing factors maybe the distinctly average bitrate, of the fact that it is bold animation, but whatever the cause it is lacking that certain something. The Dolby digital 2.0 surround makes full use of its speaker range. As already stated there is plenty of action, ships, lasers explosions, all are bounced around the speakers with plenty of rear action really filling the stage. The wonderful John Williams score too is faithfully represented with the pleasing Vader tune filling the room. Bass levels are reasonable considering the limitations of the 2.0 surround, the hum of the Light Sabre sounding as good here as in any of the feature films. In all one of the best surround tracks I've heard in a long time. The two audio commentaries have much in common; both concentrate on design, style, conflicts and resolutions with Lucas, animation and story details. Both repeat the same information to the point where there is really no need to listen to the two separate commentaries, pick one and you've heard both. These are both subtitled too, which is nice.

Bridging the gap is a seven minute piece placing where this animation sits in the Star Wars universe; it contains clips from both Episode II and III as well as interviews with Lucas, lead animators, the producer/director Tartakovsky and other story board artists and animators. We get a behind the scenes look at the offices and a brief explanation of the animation process as well as some information about the second volume of this animated series. It's brief and informative.

The making of featurette is a pitiful four minutes and talks mainly about storyboarding and scanning said boards before the computer animates it all; all this was already detailed in the commentaries. Rather a waste really.

There are three two game trailers as well as a playable demo if you have an X-box for the latest games from Lucas Arts.

In the gallery section there are original story boards, posters and character designs, too many to count.

Finally there is the teaser trailer for Episode III, a bit stiff considering the actual theatrical trailer is now downloadable.

Easter egg can be found by entering the (now familiar) 1138 code in the main menu screen, you are treated to DVD credits over some well dawn character posters. As a concept, Clone Wars is great, continuing the ever expanding Star Wars universe to include ideas that would otherwise never be made. Lucas states that this is an 'integral part' of the universe, while I don't think one needs to see it before the Episode III is might add a little bit of extra enjoyment...? It is very much aimed at kids, originally the three minute segments were aired separately, but combined the actual story arc is quite enjoyable, if rather light. However if you like your Star Wars score and your Light Sabre duels then you might gain satisfaction from this release; perhaps not essential, but certainly fun. As a DVD Fox haven't gone too mad, there are just enough extras to sustains ones interest, and Lucas hasn't gone all out for advertising either, pitched at a reasonable price this is not a bad purchase for fans of the genre.