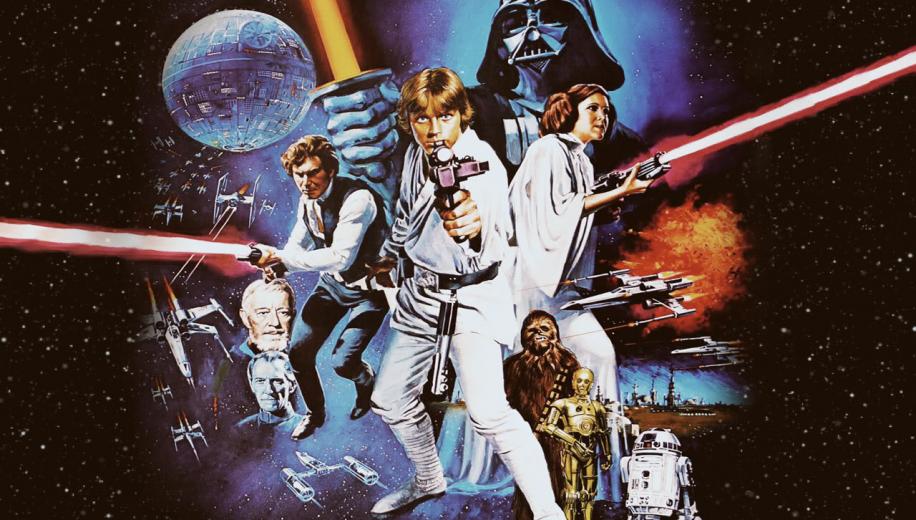 You came here in that thing? You’re braver than I thought!

Much has been said and written about George Lucus’ most successful film, so it’s somewhat difficult to bring something fresh to a review. So, instead of going down tried and tested routes, I thought I’d bring something unique: my own Star Wars experience.

I first saw Star Wars on the second week of its first UK theatrical run, it was a cold, grey day in early January 1978 and my dad drove the family up to London. My first overriding memory of this trip was seeing two Stormtroopers in the window of a shoe shop. I remember queuing outside Odeon Leicester Square, standing at the doorway entrance looking at the lobby cards proudly displaying tantalising images of what was to come. I remember being amazed at the size of the cinema (we were sat in the circle, towards the left quarter as you view the screen), never before had I seen a screen so big, and the theatre was so ornate with plush red seats. Then the lights went down and that iconic score from John Williams started, prefacing the opening crawl and that giant Star Destroyer coming from overhead. I was sold. And so too was a generation.

I saw the film three more times in its first run, though not in such auspicious surroundings, my venue of choice was the ABC Cinema in Ewell (most famed for being used by the Comic Strip crew in their short, Dirty Movie) as it was just a short walk from my then grandparents’ house. And at each viewing my adoration for the film just grew, like so many of my generation the film seems to speak to me, somehow, it was … magical. It was only as I got older that I began to appreciate it from a different perspective; that of its construction as a film. During its development, Lucas cast his net far and wide, with most of it emulating master film maker Akira Kurosawa, in particular The Hidden Fortress, in which the story telling device was through two bedraggled peasants, whose bickering and friendship allowed the film to unfold – an idea that was stolen wholeheartedly with the droids C-3P0 and R2-D2 and one which proved to be a winning combination. The story of how the film was saved in the editing suite is well known, little wonder it gained an Academy Award; I wonder how they feel now with the continuing editorial tinkering the film receives.

That first edit is adored by a generation or more and it continues to be a source of frustration that it is not commercially available. Thankfully, there are a dedicated few with projects like the Despecialised Version, and more recently 4K77, who do their upmost to preserve one of the true giants of cinema in a presentation from when it was first shown. But as to tonight’s feature, we present Star Wars in its commercial 4K release.

Star Wars was shot using a combination of Arriflex 35-III, Panavision PSR R-200, Panavision Panaflex X and Panavision Panaflex cameras on 35mm film, and has been newly scanned with 4K resolution for this release. It should be noted that the latest ‘Special Edition edit’ has been the source for this scan, it therefore contains much of the colouring inherent to that release. The disc presents a native 3840 x 2160p resolution image in the widescreen 2.39:1 aspect ratio, and uses 10-bit video depth, High Dynamic Range, and is encoded using the HEVC (H.265) codec for HDR10. We reviewed the Region free UK Ultra HD Blu-ray release of Star Wars on a Panasonic 65DX902B Ultra HD 4K TV with a Panasonic DMP-UB400 Ultra HD Blu-ray player.

We are all familiar with the issues that the previous Blu-ray release had, well you can pretty much banish that disc from your collection, as this new scan blows it away.

The detail that is now on show is quite phenomenal, be that dents, scratches and grime on the two droids, frayed fabric on Ben’s robe, wonky buttons on Vader’s chest panel, or staples like skin texture or the desert sand which are so well defined. It is like seeing the film on the big screen where everything is on show again, you see the imperfections, the ‘dirtying up’ of the ‘universe’, the coarseness of the props, and yet, somehow, it makes it all the more real.

... this new scan blows the old Blu-ray away

Colours are rich, vivid and bold, and graded with perfection, lasers are a good shade of red, light sabres glow, flesh tones remain natural, while the greens of the Death Star lasers are punchy. Of course, we do have to contend with the recolouring given to the last Blu-ray, so while the purple of the sunset over Tatooine, with Luke looking into the distance as the music swells might be gorgeous, it is still the wrong colour ….

The original source is pristine, the special edition CGI inserts do stand out as incredibly coarse while grain is kept well in check.

Black levels are tremendous, indeed the whole disc is somewhat darker giving a strong frame depth; check out Leia hiding in the shadows before being stunned by the Stormtroopers, or C-3PO popping up from the shadows after R2 has run off. Highlights also push the frame, explosive sparks are terrific!

Bass is tremendous with some full on LF effects, check out the Falcon’s blast off, or the various explosions, real chest thumping stuff. Dialogue remains clear through all this, dominated by the frontal array and sounding perfectly natural. Indeed, the whole track doesn’t put a foot wrong, lovely stuff.

Conversations: Creating a Universe – 8 minute feature, new for this release, with Joe Johnston (from ILM) and Roger Christian (a Star Wars set dresser and a second unit director) who meet and discuss their time on the franchise at the Skywalker Ranch.

Discoveries from Inside: Weapons & The First Lightsaber – 3 minute short with Roger Christian and J.W. Rinzler looking at weapon props inside the Skywalker Ranch art archive.

Legacy Content – Holds a number of featurettes seen before

There is not much that can be said about Star Wars that has not already been said – a landmark film that means so much to a generation and a franchise that gives as much as it takes away; a simple story told with verve and one that still manages to capture the imagination.

Star Wars on 4K, it's not going to get better than this unless they release the original

The 4K UHD package from Disney is amazing; a lavish box set, housing all discs from the ‘Skywalker Saga’ in a presentation book; with Star Wars receiving a new scan that shows up more detail than ever before with a rich colour scheme that is bold and vivid, even if it’s based on the last ‘Special Edition’ so the colours are not ‘pure’ in terms of how it used to be. The Dolby Atmos surround track is simply a triumph with lovely separation and powerful bass. The extras package is immense and even manages to slip a few new features into the mix.
﻿