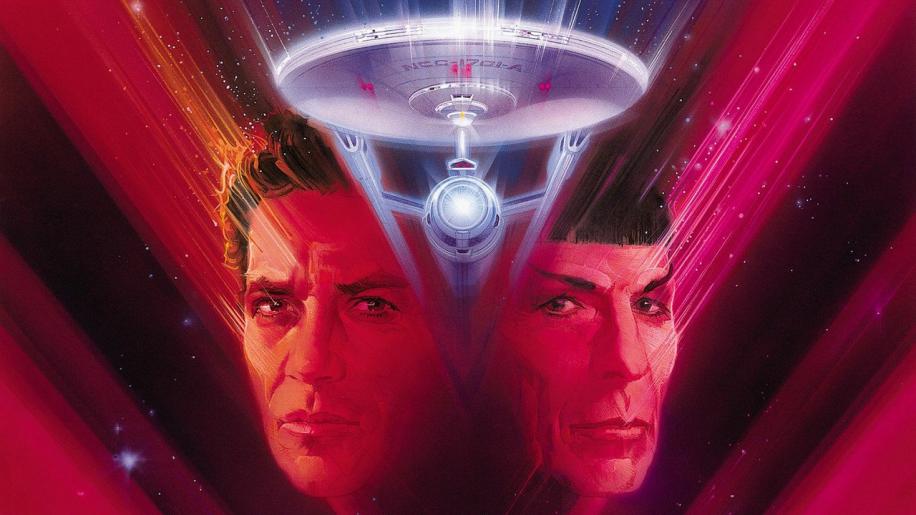 As I had the recent R1 disc available at the same time as it's R2 equivalent it made sense to compare and contrast the two encodings. I would therefore ask you refer to those remarks when considering these. The first thing to say is that the same master seems to have been use. I say this because the signs of aging are present in the same areas. Pops and scratches appear identical. Unfortunately the print suffers in comparison with its North American cousin. Black levels are crushed in many scenes loosing all shadow detail. This is noticeable in the opening scenes on Nimbus III, when the face of the toothless alien is lost in deep shadow, and the campfire scenes where at one point; Spock's head appears to be floating in the darkness. Scenes on Nimbus III are heavily filtered and I therefore excused the magenta shift (although this was not apparent on the R1 DVD), however skin tones throughout suffer from a similar magenta shift. Not terrible, but noticeable, and those of you who are like me will be distracted by this. Other than this the print is much the same as the R1 version. But the added faults lose the picture a further point.

The sound mix is identical to the R1 version and as such is very good for a movie of this age.
The sound, unlike the picture, has had a major overhaul. This will undoubtedly be the best you have ever heard this movie. The whole sound stage is well used and every one of your speakers will be well utilized. Base digs deep, the music score is rich and enveloping, and the actors' voices are not drowned out, as is so often the case with action movies. God's voice has an all-enveloping resonance that works very well. Full marks to whoever mixed this 5.1 soundtrack

Although provided for review on VHS tape rather than DVD, the extras are the same as the R1 version, and as highlighted below are excellent and provide flesh to the bones for Trekkies.

William Shatner, apparently not happy with merely directing, writing, and starring in STV, decided to rope another family member into the production, as he provides commentary on the movie with his daughter Elizabeth. She was also on set during production and wrote a book about the experience.

Despite what you might think about William Shatner the actor, William Shatner the man is an endearing person, and with his daughter he provides a gentle insight into the problems he faced with time and money, and his constant battles with Paramount to get the movie he wanted on screen. The evolution of the plotlines, and the insistence on character consistency by the relevant actors is fascinating. It almost made it worth watching the movie again!

Also provided is a text commentary. This is “written” by Michael Okuda, author of the Star Trek Encyclopaedia. It can be watched at the same time that the spoken word commentary is provided by the Shatners, although taking in both can be a little confusing. This is not a feature I have seen before, and it is not one I would like to see again. If the relevant people can't be arsed to sit and commentate, I can't be arsed to sit and read! It's distracting and fragmenting, and I don't think it works. However for the sake of you dear reader I read every word. The information was mainly interesting, providing factual details on the production, (for example a scene was planned where a shot of Mt. Rushmore revealed the face of a female African-American President carved into the mountain), character motivation and background, and even a little humour, although there was some duplication with Shatner's recollections. As an experiment in added value features I think it fails. Stick to the commentaries.

Disc 2 Contains a number of excellent featurettes and documentaries that go above and beyond the usual marketing fluff on DVDs. Of particular note is a 30minutes retrospective with interviews with director, producers and production staff, further outlining the budgetary constraints, the major changes required to the end of the movie in order to stick to budget, and the experience of Shatner as a first time feature director. There is also video footage of the Star Trek V press conference, which proves if nothing else that an actor without a script is as dumb as you and me.

There are also short videos on the actors playing the lead klingons. Who are interviewed fawning over each other, and relating tales from the make-up room, and two mercifully short videos entitled Cosmic Thoughts, and A Green Future containing a variety of scientists doing what they do best, speculating and theorising on the cosmos and the future of the planet. The extensive package is further enhanced with production stills and make-up test footage for all the major, and minor characters, theatrical and TV trailers, and lost footage of the wisely deleted Rockman ending and other deleted scenes.

Overall, an exhaustive and entertaining couple of hours, which shows that even bad movies are made with the best intentions.

Poor dialogue, poor acting, poor special effects, a poorly restored print. These are not redeemed by a very good sound edit, and a well featured list of extras. Ultimately this is for die-hard trekkies and collection completists only.