A patch is needed...at warp speed! 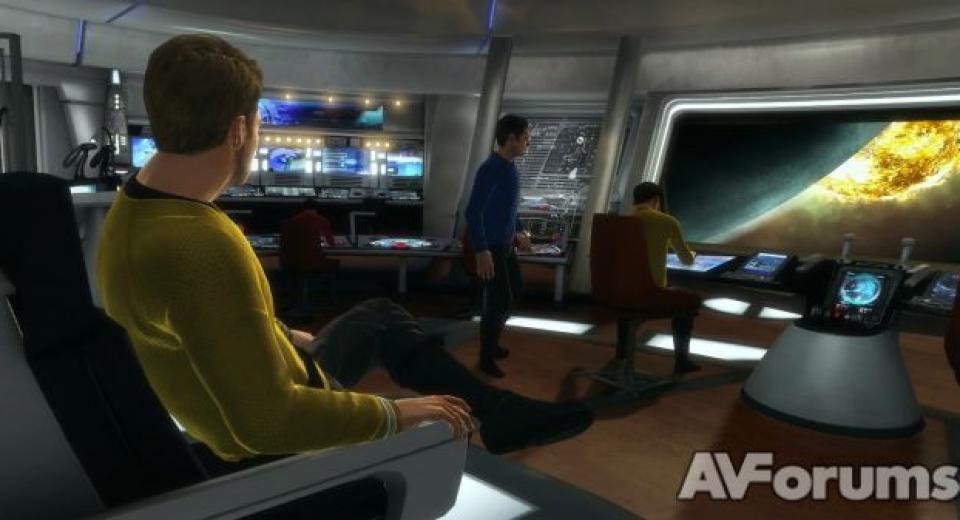 It’s the perfect time for a Star Trek game: the latest movie is hitting cinemas, the big-budget PR machine is in full flow and the gaming schedule of mid-to-late spring is so bereft of quality as to potentially make a reasonable movie license tie-in look half appealing. Coming from Canada’s Digital Extremes - who scored a pretty big hit with The Darkness II last year - and boasting voice acting from the cast of the films as well as an original canonical story that slots in between JJ Abrams’ reboot and its sequel, Star Trek starts to sound a touch promising.

As with any sensible movie-based tie-in, the route taken is third-person action adventure, allowing gamers to get a full sense of the characters and their story whilst keeping it cinematic. The slight twist here being the game’s skew towards co-op play. You choose to control either Kirk or Spock, and can then opt to utilise AI or another player (set to “private” for friends only or “public” for anyone to drop in and lend a hand) for your companion. The scene is set well, with fitting scripting and voice acting surprisingly not being phoned in (though the writing of Kirk’s frat-boy schtick still makes him eminently punchable, an annoyance saved by Zachary Quinto’s Spock). Character models too - at least facially - look great. The low-res textures and aliasing rear their ugly head in places, but the lighting and authentically recreated environments do enough for you to overlook these. The music is typical blockbuster fare - suitably orchestral and bombastic - and the Trekky audio cues like the Tricorder sound pitch perfect.

It builds nicely as a solid sci-fi full of sleek surfaces, techy gadgets and absurd outfits that may just be enjoyable for non-aficionados as well, sort of like a cut-price Mass Effect. The early story elements of a machine capable of harnessing the power of a star, an infected remote Vulcan research facility and hints of scientific and possible political intrigue are lost though, as the standard rip in space/time is revealed to be your pedestrian monster closet. As soon as you see the enemies you’ll be battling for ten hours, all atmosphere seems squandered as sci-fi steps aside for schlock; anthropomorphised lizard beasts, or the Gorn to Trekkies familiar with their previous appearances. Your typical green beasties, bizarrely evolved enough to wear armour, but not yet trousers.

For many, the mood will likely already have been undermined by this point, as the AI is clunky to say the least. I’d barely started the game before I had to backtrack to find Spock, only to witness him magically levitating and running against invisible walls. The main offender appears to be the admittedly inventive use of non-flat surfaces to traverse, such as cylindrical floors that you adhere to with the aid of specialised boots. The glitches may get ironed out, but they’re a classic sign of a game hurried to coincide its release with a film; surprising given the reported three years Star Trek has been in the making and claims of an unrushed development intended to swerve such issues. Ultimately, licenses always have to ignore the “they’ll be ready when they’re ready” maxim. Combat-wise the game plays it safe, with a dual-weapon system and cover mechanic. The latter is not terribly necessary for anyone with shooter experience, as a quick draw, correct corridor strafing and careful aiming largely suffices. Using the auto cover-to-cover option is hit-and-miss, sometimes a perfect roll and other times a bullet sponge waddle. You can use your Tricorder to point your partner to a strategic location or to attack, though sometimes when space is of a premium it’s best to order them into a corner where they’re no danger to themselves or others. The first time they bump you from cover like an overeager child playing musical chairs you’ll question whether the tag “AI” is only half applicable. Still, in wider environments they can be left to their own devices, but be prepared to alert combatants if you plan to play it stealthy as they run about in odd directions. They’re an extra gun and little else.

Luckily the combat-light sections are far more enjoyable, as the use of the Tricorder comes to the fore and the more desolate vision of space-operas is almost realised. Like the Detective Mode in Arkham Asylum/City, holding L2 engages a scanning mode, whereby objects of interest are highlighted, and interaction - such as hacking - brings experience points for equipment upgrades. The audio logs you’ll find via these means do a better job of adding depth to the story than the admittedly authentic blockbuster cut-scenes. Your missions when phasers aren’t set to kill are generally find-it tasks and alternate path discovery, but taking the time to scan your environment emphasises just how good some of the sci-fi locales are.

Sadly, the deeper you go, the more you see of the filler sections. The variety on offer, such as the ship shoot-out or free fall, becomes less integral and more a sideshow to the mass of identikit boxes, doors and walkways. Navigation isn’t a problem though, even without a map, as there are usually so few options available and the Tricorder always points you towards your next objective (in reality even this basic set-up is unreliably implemented). The linearity is necessary though, as even with solitary tasks to complete, events can fail to trigger, as such checkpoints are frequent; completing a timed mission only to find the option to descend a ladder fails to materialise would break a gamer’s will if the preceding section had to be re-completed as well. With real complexity and depth having to be jettisoned because the underlying game couldn’t support them, the knock-on effect is that Star Trek fails to sufficiently engage as a co-op experience. There are too few enemies - and they are usually negligible in threat, seemingly unable to properly flank or remain alert - to make a human companion a must unless you just fancy a chat. If you want to jump in with someone not on your friends list, then you can forget about trying to eke out the atmosphere and scanning everything with your Tricorder; there isn’t enough within the environments to make it interesting for two players, and rushing only robs the game of what little of true value it has to offer.

Star Trek bills itself as a co-operative title, but so few of the design choices are fully tailored to this ideal, and they’re almost all tethered back by the lack of sophisticated AI. Genuine partnership is unnecessary for huge swathes of the game, and where it is needed the level of intricacy aimed for has clearly been reduced so as to aid coping when only the clunky AI is on hand.

The Trek locations are well recreated and the new environments and scripting fit with the universe well. Coupled with voice acting from the films’ cast, the game should have a certain pull-factor for fans, but the hope that it could stand as a solid game without the license looks to have gone sadly unrealised.