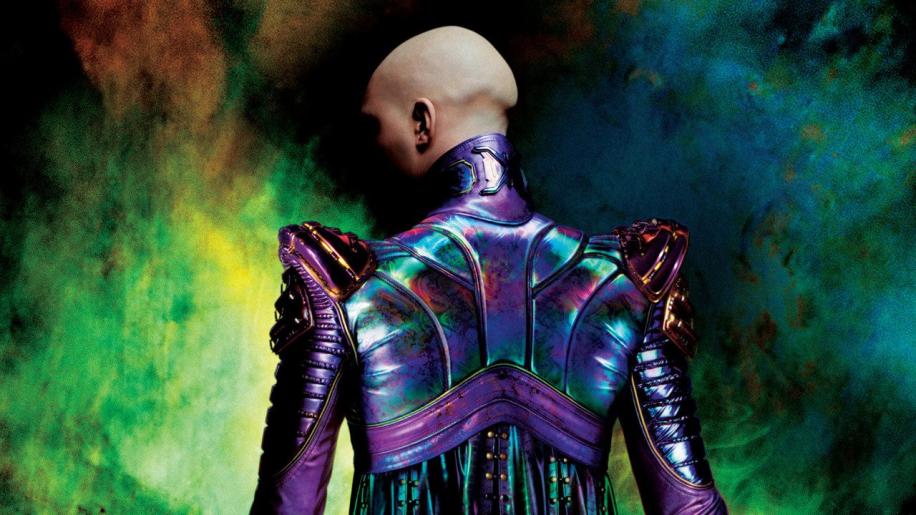 Paramount has provided a theatrically correct 2.35:1 aspect anamorphically enhanced for widescreen TVs picture with an astonishing average bitrate of 8.30 Mbps. Since this is most modern of the Trek films it follows that this one should look the best and boy does it. The incredible bitrate makes everything look thick and full bodied as only high rates can. Colours are bright and striking with contrast and brightness levels that produce wonderful thick blacks and blues. Couple this with pin sharp detail levels and you have a near perfect transfer. It is only let down by the occasional blip of print damage, though rare, is visible because the rest of the print is so good. Digitally there were no compression problems but did I spot some small amount of edge enhancement? If I did it was minimal and shouldn't detract from an excellent transfer, definitely the best of the ten films.

The disc has been give an English Dolby digital 5.1 and DTS 5.1 as well as English and French Dolby digital 2.0 surround tracks. If you thought the picture was good wait until you get a load of the sound. The 5.1 tracks really make full use of the format. Each speaker gets a thorough workout with the sound being steered around the room to give an excellent audio experience. Dialogue is clear and from the front with the exception of the Viceroys which comes from the front three and sub to sound resoundingly deep and resonate. Talking of bass there is plenty for the LFE to be happy about and plenty to keep the neighbours awake too. Of the two I found the DTS to provide the better separation and depth as well as being louder, the Dolby though excellent just wasn't quite there. One small niggle, the noise on the bridge wasn't enough, previous films have had plenty of bleeps and chirps from everywhere, not so this one, being kept to the front, pathetically nitpicky I know, but that's my job.

The two 2.0 surround tracks are also nicely full bodied, but lack the oomph that the 5.1 has, obviously. The French dubbing was awful, by the way.

There are three commentaries for the film, two audio and one text. The first is with director Stephen Baird and is a rather uninspiring affair. There are plenty of pauses and when he does speak it's normally about the scene you are watching, little background info is given except the usual script changes, darker tone, editing choices etc.

The second commentary is with producer Rick Berman; he too goes the Baird route of explaining the scenes you are watching, only duller. He does mention story, cuts, casting and budget but steers well clear of any in-depth discussion. It would have been better to cut this track into the one above, might have been a more satisfying listen.

Thankfully the text commentary by regulars Michael and Denise Okudais the usual light hearted mix of fact and trivia, no stone is left unturned and there is much information given.

This is where the majority of the extras reside; under the subheadings Production, The Star Trek Universe, The Romulan Empire, Deleted scenes, Archives and Trailers.

Production kicks off with Nemesis Revisited a 25 minute retrospective of the film containing film clips and interviews with cast and crew, all from 2002 rather than newly filmed material, however is does provide some good background and character subjects and is very enjoyable, one of the better extras on this disc.

Next up is New Frontiers: Stuart Baird on Directing Nemesis which gives the usual gushing praise on the director. Contrary to the commentary Baird does come across well and has much to say, shame this is padded with so much material from the film.

Storyboarding the Action sees conceptual artist Tom Southwell discuss the methods employed to visualise the action, a bit too short to go into any detail.

Red Alert! Shooting the Action of Nemesis has contributions for cast and crew on three big scenes form the film, the car chase, Riker's punch up and effects of the last battle between the two starships. Fairly light again but does provide some nice behind the scenes material and reasonable information.

Build and Rebuild has production designer Herman Zimmerman and two other art designers discussing the various hardships in producing a Star Trek picture, they always manage it somehow though; this is a similar featurette to other releases.

Four-Wheeling in the Final Frontier is a break from the normal Trek in that it focuses on the driving sequences (never before used in a Trek film) and has contributions from the various stunt drivers and designers as they talk about design, build and use of the vehicles.

Rounding off Production we have the Shinzon Screen Test, Hardy and Stewart verbally battle.

Moving into The Star Trek Universe we start with A Star Trek Family's Final Journey in which the writer, cast and crew discuss the character dynamics and movie themes rather than the name implied final film retrospective.

A Bold Vision of the Final Frontier is presented once again by Baird in it he touches on various topics all of them Scimitar (Shinzon's ship) related. Design, production, editing, creation and film climax are just some of the items discussed in its 10 minute run time. Baird comes across as knowledgeable and is ably helped by some split screens so we can see pre-rendered and final product.

Finishing off this section is Enterprise E and sees Zimmerman and his cohorts talk about the various changes to the flagship for this film, interesting in a fanboy sort of way.

Next up is The Romulan Empire and starts with Romulan lore in which the producer, co producers and writers inform us about Romulan history and then bring us right up to date with Shinzon and his motivations. A very interesting piece and proves that a bit of background information can go a long way.

Shinzon and the Viceroy talks about the main villains of the film, some character insights are revealed but it's still not too in depth, rather an informative chat.

Romulan Design has us take a look through the eyes of the special effect designers, artists, scenic and make up artists at the Romulans. Their planet (s), ships and look are all discussed in depth and is again a very interesting little piece.

The Romulan Senate and The Scimitar has the usual suspects discussing designs and sets, conception and execution of their respective areas. There is plenty of information on all aspects and it is an enjoyable watch; these are the final featurettes under the Empire section.

There are thirteen deleted scenes that may be watched individually or all together with a play all function. Some get introductions from Berman or cast members, though there is little actual information as to their excise. Some are scene extensions others are stand alone, though many are not necessary to the film exposition, a few seconds here or there to clear up some plot points (Worf or Chrusher for example) wouldn't have gone a miss. Runs for 27 minutes with the play all function.

Moving on to Archives we have the storyboard section which details through The Scorpion Escape, The Jefferies Tube, Collision and Data's Jump, nice pictures if you can get through them.

Production showcases 60 odd images mostly showing concept art, but there are also some photos from the set.

Bringing up the rear is the trailers section, contains the teaser and theatrical trailer for the film and one for the Borg Invasion experience.

Star Trek Nemesis may not be the best Trek film out there, and is certainly not the fans favourite. However it is still a reasonably enjoyable sci-fi romp with enough explosions to keep most of the action boys happy. As a DVD Paramount have once again pulled out all the stops to produce a fully loaded package, with exceptional picture and sound quality and a mammoth array of extras there is enough here to entice most to upgrade their current disc.