"Ugh. People really use the holodeck for that?" "Oh yeah. It's mostly that." 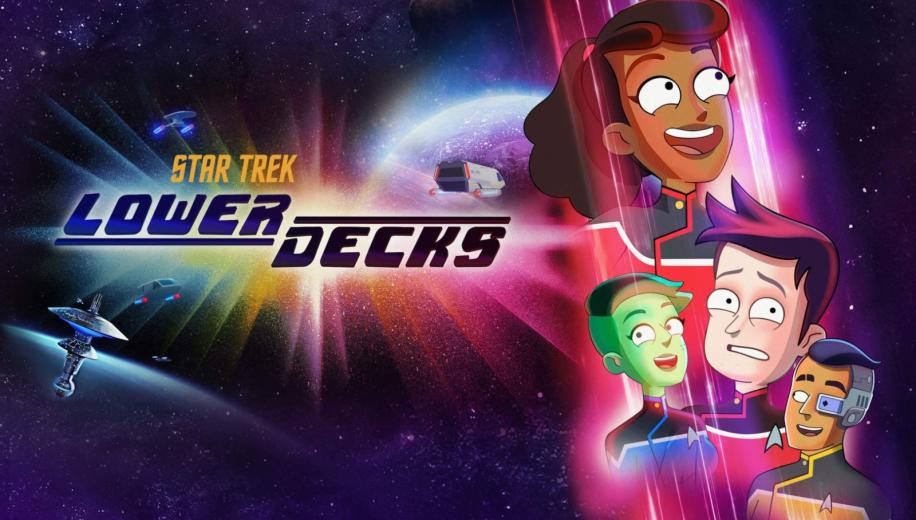 As a season of 10 stand-alone 22 minute episodes, Star Trek: Lower Decks is a welcome relief from the claustrophobic and yet criminally padded out serialisation of the current live action shows.

Star Trek is a phenomenon. People love it. I love it. I still watch Discovery even though I’m pretty sure I hate it. I’ll be watching Picard season 2 even though I know I definitely hate it. And I don’t think I’m an outlier in these completely irrational viewing habits; experience and the internet tell me that thousands, maybe millions of people are doing the same, pulled along by a sense of loyalty to the name ‘Star Trek.’ Where other shows would have audiences throwing up their arms in despair or annoyance, Star Trek gets an inordinate amount of leeway.

Sadly, it seems that Trek has become the beloved family dog that has long since grown senile: it keeps biting you but you just don’t have it in you to give up on it. Lower Decks, CBS All Access’s animated series, now on Amazon Prime, is like that glimmer of the personality of the dog you used to know before all the biting. That brief glimpse of a shade of its old self; a bitter-sweet moment as you realise that these are perhaps your final moments with that companion. Fleeting moments that remind you of what you once loved before your dog became obsessed with lens flare and explosions and crying… yeah, okay, the metaphor broke down.

An animated sitcom set in the prime Star Trek timeline, Lower Decks follows the adventures of Mariner, Boimler, Tendi and Rutherford, four ensigns aboard the USS Cerritos: a Federation ‘also ran’ starship that specialises in second contact missions, checking up on all the new species discovered by the likes of Kirk and Picard. As they wade through one diplomatic disaster after another, the four stave off catastrophe through a mixture of good old fashioned Star Fleet ingenuity and dumb luck - usually with the emphasis on the latter.

Created by Rick and Morty alum, Mike McMahan and inspired by a final season episode of TNG, the show concerns itself with the frustrations of the day to day running of a star ship, the inconveniences faced by those engineers and science officers and operations ensigns who walk across the shot in the background of any other Star Trek show.

It knows how to set a joke up, it understands the rhythm of it and should sound, but not how to land it.

There’s something of the BBC sitcom Red Dwarf in the ST:LD’s DNA. It plays on the petty squabbles and general incompetence of the little people who actually do all the work on board the ship and the tensions between those happy to slack off during their busywork and those desperate clinging to the belief that they are destined to climb the ranks. There are some great character moments and the four definitely grow on you as the series progresses but, rather than allowing the audience to settle in with that perfect sitcom dynamic, the writers are chomping at the bit to launch the characters straight into ‘crazy’ situations to get the wackiest humour out of them.

It’s this tendency to lean away from the show’s strength and towards a more gross-out, Rick-and-Morty-lite style that holds the show back from being unequivocally good. It knows how to set a joke up, it knows the rhythm of it and how it should sound, but not how to land it. What the writing does well, however, is mining old episodes of Star Trek for the ridiculous, poking fun at the show’s own inheritance, and the moments where it wades deepest into this unabashed fandom are its most enjoyable. Enjoyable, but never really laugh-out-loud funny.

Tawny Newsome (Space Force) and Jack Quaid (The Boys) nail the love/hate dynamic between the relaxed and over-confident Mariner and the terminally uptight but incompetent Boimler. Quaid isn’t a natural voice actor, but here he musters up the manic energy required to spa with Newsome’s effortless charisma. Noël Wells (Master of None) and Eugene Cordero (The Good Place) add some welcome heart as Tendi and Rutherford, an Orion girl with boundless enthusiasm and a socially awkward cyborg engineer. The characters pair off in those ways regularly, perhaps too frequently, giving little opportunity for, say, Rutherford and Mariner to interact and the result is a formulaic pattern that quickly begins to feel repetitive.

Nevertheless, as the season settles into its stride so does the fun and, after a shaky start, it goes out on a series of stories that are the closest to finding a healthy balance of blending old ideas and new, though those issues of repetitive structure never really go away.

...it clearly loves Star Trek as much as I do. Minutely, obsessively, unhealthily.

The majority of the episodes of Lower Decks follow what could be known as The Star Trek formula. A plot / B plot. If you’re a Star Trek fan – and why would you be reading this if you weren’t – you’ll recognise it as the type of story where one set of characters beam down to a planet for the main events of an episode, while another set deal with some kind of secondary problem, interpersonal or technical, on the ship. All episodic series will use this method of plotting out a story at some point but it was highly favoured during the Rick Berman era of Star Trek (The Next Generation through to Enterprise) so, as a pastiche of that era, it’s only fitting that Lower Decks should do the same.

The best of those Trek shows from the 90’s excelled at making sure the A plot and the B plot were somehow related. They didn’t always pull it off but, more often than not, what happened with one set of characters would impact what was happening with the other. Lower Decks cannot seem to achieve this. You could split nearly every episode equally into its A plot and B plot components and have two entirely standalone 11 minute episodes of the show. It’s not a capital offense in the world of TV, in fact it happens all the time, but it’s not very satisfying either.

And that’s Lower Decks in a nutshell: It understands clearly what the fans of TNG era Star Trek loved about it, it knows how to parody it well, but doesn’t quite know how to replicate it. The kindest thing you can say about the show is that it clearly loves Star Trek as much as I do. Minutely, obsessively, unhealthily. It’s the show's greatest asset and its greatest failing. It’s so wrapped up in loving Star Trek that, as yet, it doesn’t really know how to tell its own stories. The most fun to be had is going over each episode with a fine-toothed comb to pull out the densely packed references. It’s frequently fun (and infrequently funny), but not really on its own merit.