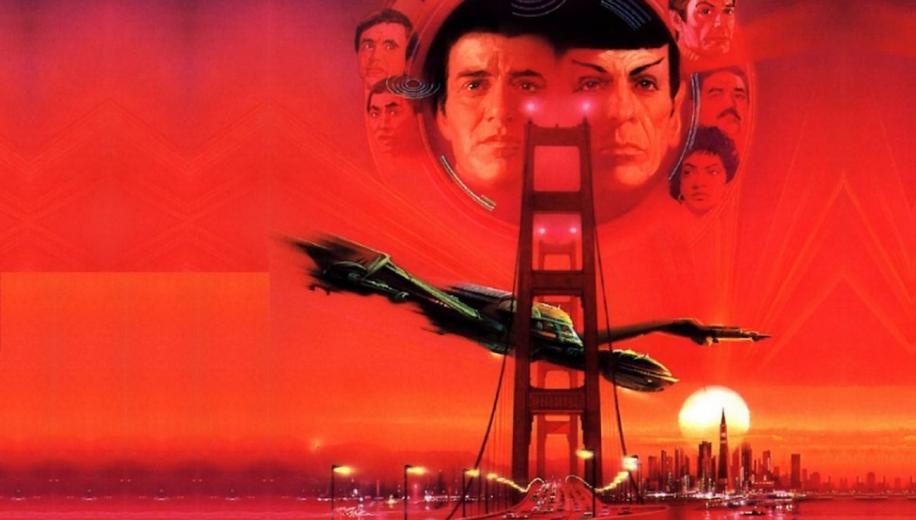 Rounding out the Genesis Trilogy and jumping on the Back to the Future bandwagon, Voyage Home followed up all of the devastation and sacrifice of the last two films with a very light, breezy romp through 80s 'Frisco.

In many respects, the entire Original Film Series can be seen as merely mirroring the Original TV Series, only on a Big Screen scale. The Motion Picture was adapted from a planned 2-part TV show episode story, The Wrath of Khan was a sequel to another memorable TV episode, Space Seed, and the Klingon-centric Search for Spock was, well, like a classic Klingon episode with some quintessential Kirk-wrestling thrown in for good measure. And The Voyage Home? Well, as they say in the very episode, they'd done this before - in the TV series - slingshotting around the sun and flipping through time in the Season One episode Tomorrow is Yesterday.

After the success of 1985's Back to the Future, it seemed like a no-brainer to revisit this theme, with returning Khan writer/director Nicholas Meyer (although he still left directing duties to Nimoy, for his second tour in the seat) intent on delivering a fun outing devoid of photon torpedo battles, phaser blasts, characters dying and, well, even a bad guy. It was an ambitious pitch, particularly after the serious tone of the last two chapters in this 'trilogy', but it would nonetheless result in the most successful Star Trek of the lot (The Motion Picture may have secured marginally more at the Box Office, but at less than half the cost, The Voyage Home was the clear winner).

... it really is a very light, frothy and frivolous affair but that turns out to be precisely what the franchise needed

Frequently referred to disparagingly as "The one with the whales", The Voyage Home's opening act offered a soft segue from the sombre events of the last two outings, to the later, more comedic shenanigans they planned to unleash, initially establishing the Enterprise crew's decision to return to Earth for trial, which was then interrupted by the threat of a giant space object which starts disrupting Earth's oceans - and neutralising any space vessels in its path - and which Spock deduces is trying to communicate with whales, long-extinct since they were hunted to death in the 21st Century. Realising that their only hope is to go back in time to pick up a couple of whales - as you do - The Voyage Home then shifts to fish-out-of-water comedy for the duration.

The core cast are split off into excellently chosen pairs to navigate the already colourful streets of San Francisco: Shatner's Kirk and Nimoy's Spock make for a great duo - the latter given the funniest lines because, well, he was already way too logical for the 23rd century, let alone 80s 'Frisco. But they work well together, as Kirk tries to reconnect with his lost friend, and Shatner gets his own sparks of fun chemistry opposite a well-chosen Catherine Hicks, playing the cetologist who herself wants to save the whales (a heavy eco theme plays out here really quite effectively without derailing the adventure). Uhura and Chekov's search for the "nuclear wessels" must have been seen as a clever play on his cheesy "Russian" accent given the tail-end-of-Cold-War setting, and it goes from laugh-out-loud funny to hasn't-aged-quite-as-well in a heartbeat, and Scotty and McCoy are absolutely standout stars, as James Doohan really throws himself into his part as a genius scientist and DeForest Kelley embraces his "don't get lost in the part" foil to the madman he's created before embarking on a blunt mission to ridicule the 'primitive' state of 20th Century medicine.

It really is a very light, frothy and frivolous affair but that turns out to be precisely what the franchise needed, and The Voyage Home should rightfully be admired for what it manages to pull off in terms of adept tonal shifts, never quite drifting into outright parody, but nonetheless revelling in its fish-out-of-water shenanigans. There likely wasn't any other possible way they could close out such a thus-far sobering trilogy, and to go out on a happy, campy, high - whilst also concluding the unfinished story and character arcs - was arguably a minor stroke of genius.

Star Trek: The Voyage Home comes to UK 4K Ultra HD Blu-ray courtesy of Paramount in a box set that includes the first four movies in the original film series. This Ultra HD Blu-ray release delivers a solid native 4K image, with Dolby Vision too, which improves noticeably upon previous HD versions of the feature.

Given what we've had to endure before, The Voyage Home's 4K rendition is a marked and commendable improvement and easily the best the film has ever looked

The Voyage Home gets off to a rocky start, with shots aboard the Bird of Prey looking distinctly hazy - and unpleasantly so - as some of the production choices on lighting (they attempted to light the helm mainly through bright screens and instrument panels) likely did it no favours in terms of retaining underlying clarity. Close-ups are still very good, but things don't really impress until we hit the streets of San Francisco where - previously the waxy bane of the Star Trek universe - this presentation really starts to stand out.

HDR, WCG and Dolby Vision are perhaps marginally less standout in comparison to the previous instalments, as this feature is less about magical maelstroms and enchanting nebulas and more small-scale in its 80s comedy hijinks. Nonetheless skin tones, uniform colouring (less of a pinkish/red dominance to both here) and background environments are given life, whilst a couple of establishing shots in Vulcan are given appropriate vibrance. Black levels are strong and deep - although nothing can really improve the uninspired floating tube in space - and whilst the jade green Bird of Prey is curiously nowhere near as impressive as in Search for Spock, it still looks great. Given what we've had to endure before, The Voyage Home's 4K rendition is a marked and commendable improvement and easily the best the film has ever looked.

The Voyage Home's 4K Blu-ray, as with the other features in the set, has no upgrade in the form of a 3D High Definition object-based immersive audio track a la Dolby Atmos and indeed instead appears to reuse what looks to be the same Lossless Dolby TrueHD 7.1 mix from the earlier Blu-ray releases (themselves present on a number of re-issues of the disc).

... it's a very good track, though hardly demo

The Voyage Home's score saw another changing of the guard, after The Motion Picture's Jerry Goldsmith was replaced by James Horner to delicious effect in The Wrath of Khan, Horner himself would use up all his recycling mojo on Search for Spock, leaving scoring duties in Voyage Home to Leonard Rosenman (who himself recycled some of the work he'd done on the animated Lord of the Rings movie). The results were certainly... different for Trek, and don't always make for a particularly rousing aural immersion in terms of the audio track, but - as with the movie itself - it is a perfectly enjoyable, light and breezy effort, with effects now grounded in reality for the most part, and utilised well to bring the city streets to life. There's some LFE input, and directionality on offer (the race to slingshot around the sun is particularly intense), and the distorted whale song is suitably invasive and haunting, with plenty of incidental 80s music to bring the stage to life. It's a very good track, though hardly demo.

Paramount's 4K release enjoys a couple of Commentary tracks ported over to the 4K disc itself, with all the remaining, old, extras on the accompanying Blu-ray.

... possibly the biggest selection of any of the discs in this release

Boasting possibly the biggest selection of any of the discs in this release, there are a whole slew of Documentaries and Featurettes on offer here - well over a dozen - as well as a number of further core Interviews, Tributes, Storyboards, Production Galleries and Trailers.

Concluding The Genesis Trilogy ﻿and indeed this 4-movie Star Trek set, The Voyage Home proves a drastic shift in tone after the last couple of impactful outings, but perhaps that's precisely what the saga needed, offering a frivolously fun time travel romp to cleanse the palate.

... a frivolously fun time travel romp to cleanse the palate

Paramount's 4K Collection of the first four movies - The Motion Picture coupled with the Genesis Trilogy - is an impressive, unmissable set, delivering the features in easily the best condition they have known, with gorgeously remastered native 4K Dolby Vision-enhanced video, and both the old, great audio tracks and the majority of the old extras. For those not prepared to wait for the inevitable 10-movie collection - likely a number of years down the line - this is a tremendous set.

Also in this set:

Star Trek: The Original 4-Movie Collection is released by Paramount in the UK and available on 4K Ultra HD from 6th September 2021.