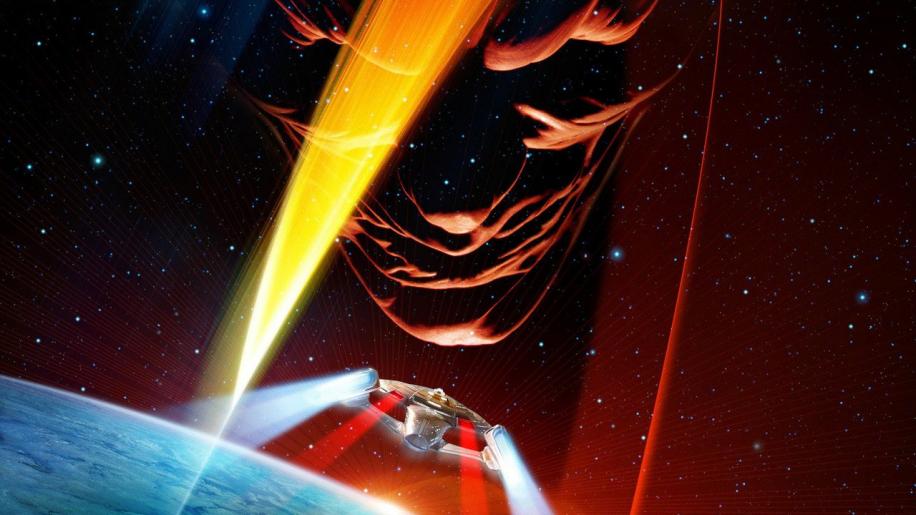 Paramount have provided a theatrically correct 2.35:1 anamorphically enhanced for widescreen TVs picture with a average sample rate of 8.59 Mbps, and what a good picture it is too. Detail seems to be the key, every thing has perfect clarity. Colours are bright and vibrant, contrast levels are set well with backs coming off very well. Digitally I could spot no compression problems and only there merest hint of edge enhancement was visible. So far so good? Well for the most part this transfer is excellent, however I did spot a number of small problems, firstly there are a couple of instances of original print problems as specks; hardly a problem really. What I did find distracting was the colour correction process forced some of the effects to show up rather badly. For example the drones have a slightly greenish tinge to them and don't quite sit in the film right, likewise their destruction explosions seem out of place somehow. So whilst most everything real looks fantastic, these few elements spoil the illusion somewhat. Perhaps I'm being a bit nit-picky, but hey that's my job.

The disc has been given two 5.1 tracks and two surround tracks. Dolby provides the first 5.1 and both the surrounds and DTS has the second 5.1. All the tracks are quite excellent in there effects, making full use of the surround stage; on ship there are constantly beeps and whistles and the hum of the engines keeping the rears busy. Planet side there are various ambient sounds and all the while the score is there filling the room with dialogue being clear, precise and from the front. The Dolby 5.1 is a nice clear mix, mid and bass levels are well realised with the LFE getting a nice slice of the action. However the DTS still manages to tip the balance in its own favour by widening the separation, having midrange clearer and more defined and deepening the bass levels giving a much more depth to the sound, making it clearly the winner in this case. The English and French surround tracks to my ear sound exactly the same, excepting the language, and are fine tracks in their own right; clear with depth and nice usage of the rears.

Disc one contains the now very familiar text commentary by Michael and Denise Okuda which provides fact, trivia and humour in equal measures and always worth a watch.

Disc two contains the majority of the extras and is split into five sub headings; Production, Creating the Illusion, The Star Trek Universe, Archives and Advertising, each with a number of different featurettes. The Production portion contains the most comprehensive amount numbering seven detailing different parts of the filming process using a combination of material filmed at the time and newly filmed interviews. There is inevitably some overlap and repartition of stock, but for the most part each heading details a separate part of the production. Starting with It takes a village long time designer Herman Zimmerman and his crew take us through the process of designing and building the Ba'ku village for real in California, incorporating interviews from Berman, and cast it is a lengthy featurette covering much detail. Next up is Location, Location, Location with the same people interviewed. The different areas used, both real and made, to make the film are discussed and scrutinised. The Art of Insurrection takes a look at the various artwork needed for the new ships and designs for the new races of people, also includes some CG work. Anatomy of a Stunt takes a look at an elaborate stunt that was never used in the film involving Data, includes much behind the scenes footage and interviews with stuntmen and coordinators. The Story in an extended interview with Michael Piller and his philosophy toward Star Trek, this film and Gene Roddenberry, perhaps the highlight of the extras. The making of Star Trek Insurrection contains the cast interviews where they discuss their relationships to each other, their characters and the sense of family that they have toward each other. Finally in the section Director's notebook contains a new interview with Frakes and his thoughts to this film, he likes the look but didn't think the story was that strong, echoing many critics, I wonder if it was his own thought.

The Creating the Illusion section contains three individual scenes, dissected by all involved in them from concept to final film, they are the Shuttle chase, the Drones and the Duck blind. Nothing revolutionary here, but the drone section has a nice freeze frame section showing exactly how Worf hit one drone from the air with the butt of the phaser rifle.

The Star Trek Universe contains two featurettes, Westmore's Aliens is a interview with Michael Westmore, Star Trek's prolific alien inventor; it is said the if life outside our world exists, it probably look like one of his creations, since he has done so many. Interesting to see the diversity of creation he has come up with over the years. Secondly there is Star Trek's Beautiful Women, a montage of the various 'hotties' that have proliferated throughout the shows run, including interviews with many cast members from other Star Trek shows including the latest TV offering. Entertaining.

There are seven deleted scenes including an alternative ending, most are slight extensions to existing scenes, others short scenes deemed not to fit with the film. Co-producer Peter Lauritson is on hand to introduce and tell us specifically about two of these scenes, and the alternative ending; even though it was never finished, the idea was not that good, and I much prefer the one used.

Advertising rounds of the discs listed content with trailers for the film, the Borg 4D and an original promo from when the film was being made, nice to see the thoughts of the optimistic back then.

Insurrection may not be the Trek film to initiate newbies to, but it is certain not he worst either. With its sense of ethics and morality it holds close to its heart all that Trek stood for, all that Rodenberry wanted from the show. As a DVD paramount have once again provided an excellent transfer with extras to suit all tastes. It is a fine addition to the collector's editions.