"I'll chase him round the moons of Nibia and round the Antares Maelstrom and round perdition's flames before I give him up!" 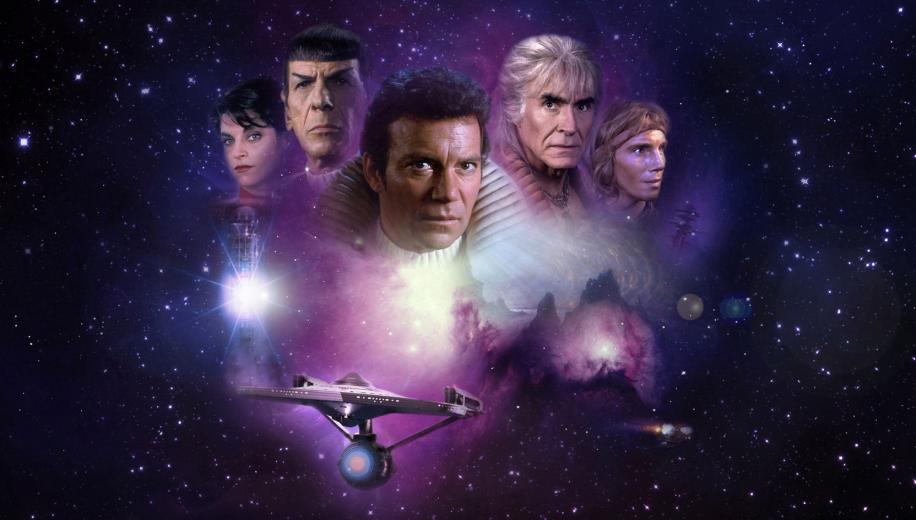 Deeply underappreciated beyond the realms of Trekdom, The Wrath of Khan is a perfectly-crafted, perfectly-executed feature which knows just how to use its much beloved core characters and their respective talents/idiosyncrasies best, whilst setting off on a timeless revenge story. That story is staged against a background of the Big Bang, the frailness of the human condition, the power of lifelong friendship, the threat of becoming old and redundant, and finding impossible answers to impossible situations. Thematically, interesting ideas wash over the entire piece, but don’t interfere with its otherwise straightforward running as a space-set tale of two sworn-enemy battleship captains locking horns ferociously and to the death.
In that respect The Wrath of Khan is more comparable to movies like The Hunt for Red October or Master and Commander than anything else in the Star Trek universe itself, other than perhaps the botched bizarro-world attempt at retelling the story by that hack Damon Lindelhof – Star Trek Into Darkness. It’s a testament to the strengths and qualities of The Wrath of Khan that, even in spite of such credibility-destroying digs, it remains an utter masterpiece, leaving imitators such as Into Darkness more unintentionally funny than anything else. Here the script, performances, set-pieces, score and story all come together in a beautiful symphony and the results are timeless and, evidently, unrepeatable.

For the 50th Anniversary of Star Trek, all of the original features are receiving a re-release, both in steelbook form and box set, however the most (and arguably only) significant upgrade - depending on your point of view - comes for (thankfully) the best entry: The Wrath of Khan. Hitting Blu-ray in its Director's Cut guise for the first time, the remastered video looks somewhat different from its original presentation, with all the hallmarks of a remastered effort - improved detail, more stable grain, richer black levels - but also some of those questionable qualities that more and more remastered releases are now boasting.


It's great to finally have the Director's Cut of the best Star Trek movie available in 1080p, although fans will still likely nitpick (rightly or wrongly) the changes made.

Perhaps the most significant change comes in terms of the colour scheme, which is now a lot quieter and less vivid, particularly on the red front. There is some debate over whether or not this is a good thing - skin tones took less flushed and the crimson uniform dominated more by brown than red. Oddly, the choice is not necessarily a consistent one, with some sequences appearing to return some of this lost red-dominant tone (and I'm not talking about the 'red alert scenes' which suffer their own banding woes). Nonetheless, it is generally a more natural look, and certainly often gives the film a more classically inspired feel, likely to better age with time than striking primaries, and with the Starships themselves sporting far less blue too; remaining more clearly white. You'll have to check it out yourself to see if it agrees with you, but since this is the only way to enjoy the Director's Cut, it's something most fans will just have to live with.

On the unquestionably positive side, as aforementioned, detail has been improved, better picking up skin textures and clothing weaves (and showing up the shiny plastic-ky look that Spock sports through many of the scenes), whilst the grain level has been moderated, giving it a more stable look that feels largely more natural and filmic. Black levels too are impressive and, these improvements leave very few technical faults - there's still some banding and crush, and some variable grain and softness here and there, but it is still a technically improved video presentation of considerable merit.

The Wrath of Khan doesn't appear to have been upgraded at all on the aural front, sporting the same Dolby TrueHD 7.1 track.

Thankfully that original lossless presentation was still a very good one, albeit far from reference, with demo flourishes largely evasive in what is a solid but arguably not stellar offering. Dialogue retains prioritisation across the fronts and centre channels, disseminated with clarity and coherence throughout, from the death-choked whispers to the blood-curdling cries. Effects are reasonably effective, allowing the starships to be given very distinctive presence across the stage - indeed without the low end rumble of these vessels as they cross the screen I dare say it would have been a whole lot harder to suspend disbelief in this very striking futurescape. Of course the more explosive sequences have a louder punch, as phasers blast out, photon torpedoes speed to their destination and ships are decimated, but they are not quite as impressive as you would have liked, and it's actually more the atmospherics behind them that allow the elements to retain presence. Horner's classic score is perhaps the crowning glory of the piece, lent priority across the track but, as with the effects, not quite as striking as you would have hoped for, which largely sums up the sentiments about the piece. Still, reservations aside, whilst this may not be a reference track, it more than does a capable job with the material, and if it weren't for the wasted 50th Anniversary opportunities to upgrade, the audio would probably be far less likely to come under fire.

The seamless addition of the Director's Cut doesn't exactly vastly expand the extras package from the DVD release but finally includes the Text Commentary Track on the Director's Cut and the Tribute to Montalban which were missing from the last Blu-ray release. The previously included Director's Audio Commentaries, Featurettes, Storyboards, and Database are still present. The only new extra appears to be The Genesis Effect: Engineering the Wrath of Khan.


Sadly Khan doesn't spill out onto two discs on the extras front, but at least everything previously available (on both Blu-ray and DVD) is accounted for.

The 50th Anniversary Steelbook releases of the Star Trek films have several things in common - they are almost all devoid of any upgrade; they all sport a garish gold bannered text design with "celebrating the 50th anniversary" splayed across the tops of them; they all have disappointing rear covers which similarly emphasise this anniversary; and they don't have any inside artwork. The plus side? Well, I suppose steelbook collectors would argue that the fact that they are even getting a steelbook release is some kind of a plus side and, if we ignore the garish gold banner across the top, the actual choice of artwork - the original theatrical poster - is a solid one. The Wrath of Khan manages to be the exception in that it upgrades to promote the previously unavailable Director's Cut but, even then, I'm not sure that makes up for the disappointing job with the release. The Wrath of Khan marks Trek perfection, finally getting an improved, albeit flawed, re-release.

Although we finally get the director's cut we should have had with the original Blu-ray release (given that it was previously available on the DVD release!), and although we get improved video presentation as well, and although we also get all of the previously available extras, this re-release still feels like something of a missed opportunity, not just in terms of packaging (the steelbook is a mess) but also in terms of technical merits. Nevertheless, the quibbles are comparatively minor and it's impossible to deny the fact that this is the best The Wrath of Khan has ever looked, and the best package currently available. And considering the strength of the film itself, that should be more than enough to get your money.


You can buy Star Trek II: The Wrath of Khan on Blu-ray here