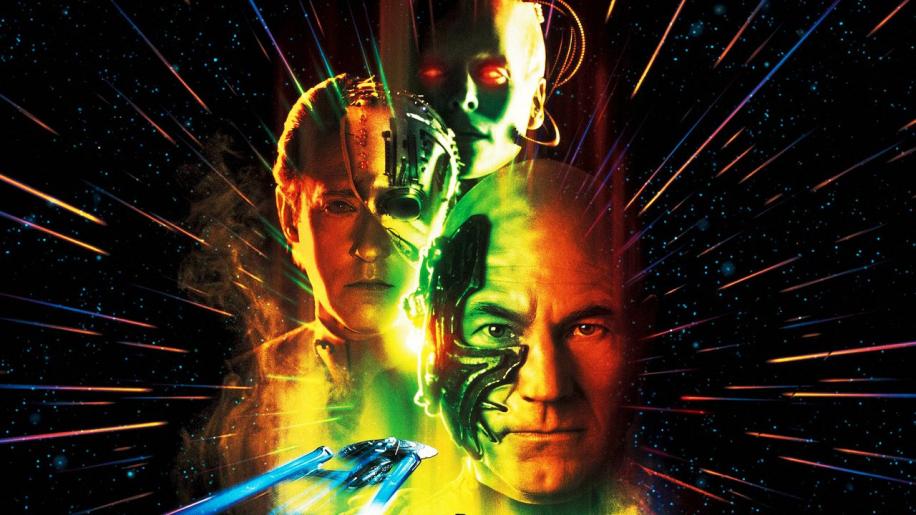 First Contact is presented with a solid 2.35:1 aspect ratio anamorphically enhanced widescreen transfer. Although a little low in contrast it is a crystal clear highly detailed transfer that seldom relies on edge enhancement to avoid softness. There are some scenes with mild grain, but it is often negligible and the print seems completely devoid of damage in the way of scratches or the like. In addition the colour palette is broad and sumptuous, with good black levels. It is a perfectly good transfer and on direct comparison with the original single-disc edition you can see how much of the edge enhancement the got rid of and what better quality this version is.

First Contact has two main audio tracks, a DTS 5.1 mix and a Dolby Digital 5.1 mix. Although I don't think that it is full bit rate, the DTS is still slightly superior, even if you seldom notice. The dialogue is always clear, mainly emanating from the frontal array. The score, on the other hand, gets the full six-speaker treatment - often coming from all around you and even occasionally provoking a little bass. Other than that, there are obviously some fantastic effects noises - from Starship battles to firefights and almost always including some tremendous explosions. Both tracks are fairly powerful mixes that have the desired effect of putting you right into the thick of the action.

On Disc One we get several commentaries. The first is an Audio Commentary with Director and Actor Jonathan Frakes - who plays Lieutenant Riker. He is quite a lively, enthusiastic chap and spends a great deal of time praising fellow cast and crew members, notably Alice Krige as one of the sexiest villains ever. He compares the intro music to the main theme from Air Force One - they are almost identical because composer Jerry Goldsmith did both. Unfortunately he does spend a great deal of time just commenting on the film as he watches it, which is a bit of a shame, but there are several points were he perks up and starts feeding titbits. These include how this was the first film where all of the ships were computer generated and how he got to blow more stuff up because this was a feature film. It certainly is easy listening but I am not sure whether it is that informative. Luckily we have a second commentary with Screenplay Writers Brannon Braga and Ronald Moore. They talk about how they were commissioned to start writing the story straight after Generations and how they originally wanted to do either a movie with time travel or with the Borg but then decided to combine both. They had toyed with setting it in medieval times but Stewart would not agree to wear tights. Then, after deciding to have the Borg as the ultimate villains, they wrote a draft with Picard on the Earth - falling in love - whilst Riker combats the Borg aboard Enterprise, eventually reversing and rejigging the roles for the final version. They provide a great deal of background into the Trek time-line and universe, noting how they conceived the Borg Queen in order to make a more vocal enemy and wanted to make a film that was accessible to people unfamiliar with the franchise as well as satisfy fans. Of the two commentaries this is easily the more informative, in no small part thanks to the fact that there are two so well matched co-writers doing it. If that weren't enough, Disc One also houses a subtitle-driving Text Commentary by Michael Okuda and Denise Okuda who illustrate some of the special effects and production details. They note the many references to the various Trek series - some of which only avid fans would stand a chance of recognising. Some of the background information is quite interesting but there are often large segments where no notes appears, so it is best watched with one of the other commentaries as well for information overload.

One of the best Star Trek movies is given the deluxe treatment that the series has slowly undergone and the end result is pretty good. An improved picture quality and DTS sound give it the technical edge, and the bevy of extras - including several commentaries and a bunch of featurettes - means that this is a must-have for any Trek fan. Newcomers to the franchise or people starting their collection should definitely have this towards the top of the list of Trek movies to get - and this is the definitive edition for you.