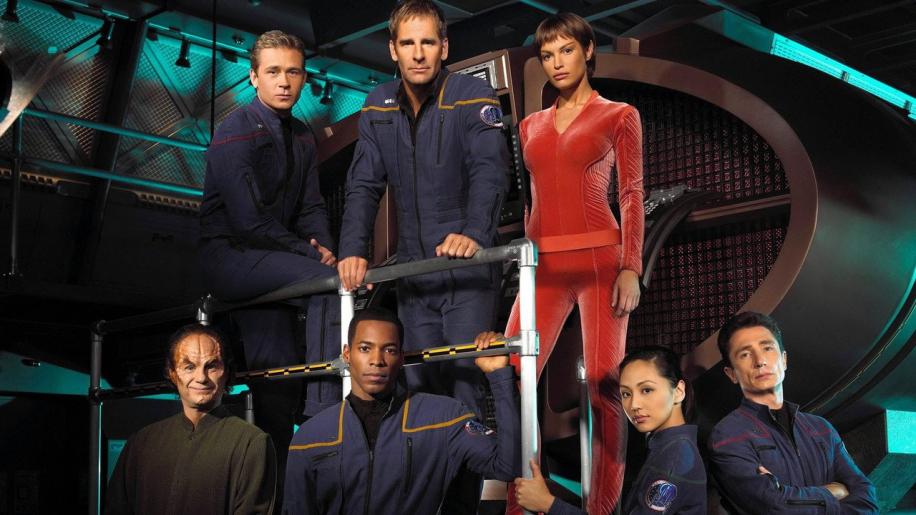 This season of Enterprise is presented in a 1.78:1 aspect ratio anamorphic widescreen transfer that looks pretty good - and it should do considering it was the first season of the series to be filmed using digital cameras. The detail is better than on previous seasons, edge enhancement was not apparent but there was some negligible softness for some scenes more than others. There is very little noticeable grain and the transfer is completely devoid of print damage and the like. The colour scheme is broad and imaginative, and equally well represented, with good skin tones and vivid reds and blues. Blacks are also solid and deep, providing for decent shadowing. Obviously some episodes look slightly better than others, particularly when they change the setting from the standard ship's quarters' background (the Earth-based episodes show off the blue-screen action a bit too much and there are too many CGI monsters) but overall this is a solid TV transfer that should please fans. The main track is an absorbing Dolby Digital 5.1 effort that makes this TV show sound cinematic in terms of dynamics. The dialogue is understandably limited to the frontal array but it comes out clear and coherent throughout and we are given plenty of other goodies to keep the surrounds active, not least the plentiful effects and the underlying score (although they still have not fixed that horrendous Michael Bolton-style opening theme, despite the marked improvement for the Mirror Universe episodes). The effects range from massive shoot-outs and explosions (in space, on the ships and on the various planets they land on) to more subtle observations like all of the ship's ambient sounds that we take for granted - it hums almost constantly. As for the score, it is cleverly utilised to splice the scenes together and bring the more exciting moments to life, penetrating through to the rears more often than any other aspects of the track. There is no significant bass to speak of but this is a minor quibble in an otherwise resoundingly good TV soundtrack. For completeness we get a Dolby Digital 2.0 track which provides most of the same content, only confined to a smaller array. As with the other Enterprise box sets, we get almost all of the extras that a fan could dream of. There are Audio Commentaries on the Mirror Universe two-parter, both with Writer Mike Sussman and startrek.com Editorial Director Tim Gaskill. They spend far too much time talking about the crew who contributed to this episode (who directs, what they directed before, who was the director of photography, blah blah blah). It takes a while for them to get into meat of the information, talking about the different ships (including the classically designed Defiant), the different haircuts, some of the scenes that were lost and all of the ideas behind the alternate universe. They dwell on Ensign Hoshi Sato's interesting part about as much as male viewers are going to while watching this episode and overall there are plenty of references to the other Star Trek incarnations that will prick up every fan's ears and these are nice commentaries worth giving a listen to.

The penultimate episode also has a Commentary with writers Judith and Garfield Reeves-Stevens, along with Editorial Director Tim Gaskill again. Here they talk about how willing the cast were to put their all into the last few episodes, despite the fact that they knew that the series had not been picked up for a further season. They discuss the big name cameos, the idea of dressing various characters in suits to show the overabundance of bureaucracy - even in the future - and the fictional science behind some of the scenes. It is a slightly more interesting commentary because there are three participants and it is nice to hear them talk about the near-final moments of Enterprise.

There are also Text Commentaries for The Forge (part of the ongoing Vulcan adventure), the second part of the Mirror Universe story and the final episode, all by Michael and Denise Okuda. Here we get to learn all of the minute details, from how they designed the planets, to the set designs (which sets were redesigned for which episodes), the character developments and the cameo parts. They offer input on the story arcs and on the finale marking the end of eighteen years of successive Star Trek series and overall they are quite interesting additions that rival the audio commentaries for quantitative information.

There are three Deleted Scenes, providing a couple of minutes' of extended uneventful alternate 1944 footage (featuring Archer), more from the Klingon Augment played by Brian Thompson and more from Archer's speech during the alternate Mirror Universe saga. None of them are particularly good but it is still nice having them here to have a quick look at.

On the sixth disc there are numerous featurettes. Moments from Season 4 is the same as the other Moments featurettes from the various series', taking sixteen minutes to sum up the best bits from this particularly momentous season with contributions from the cast (including Scott Bakula) and the crew. They discuss the opening alternate 1944 story, the cliff-hanger ending to the last series (when they did not know whether they would return for a fourth outing), the great Vulcan story arc, the Eugenics themes and the last few episodes (including a nod to the Cuban missile crisis), providing plenty of corresponding episode clips, but also a little bit of behind the scenes footage and some stills.

The featurette, 'Inside the “Mirror” Episodes' looks at this two-parter towards the end of the season. Running at fifteen minutes we get the low-down on this alternate universe story, with the cast and crew discussing everything from the costumes, the sets and the evolution of the story, to the original idea of bringing back William Shatner for a cameo (which shamefully did not come to fruition). This is an interesting featurette with plenty of references to the corresponding Original Series stories and the earlier Enterprise stories and much trivia for fans to lap up.

We get a thirteen-minute Visual Effects Magic Featurette that simply exudes self-praise about the many admittedly fantastic effects shots (including the whole World War 2 set-up). There is plenty of computer generated design footage, concept art and crew interviews to keep you entertained and it is quite an informative featurette.

There is a Links to the Legacy Featurette which runs at four minutes in length and looks at the crossover ideas that connect to the other Star Trek incarnations. These include the references to Spock's childhood pet, the Klingon continuity problems that they literally smoothed-out and the creation of Section 31, with comments from the creators and clips from not only this season but also the relevant seasons of the other Star Trek vehicles.

Enterprise Secrets (Part 4) takes a six-minute look at some of the trivia behind the series, including footage from the final day of shooting (where lots of old crew members had walk-on parts in the audience). Only die-hard fans would already know this information but, correspondingly, it is also a little too specialised for casual watchers.

That's a Wrap takes a close look at this, potentially the final season of Star Trek ever. We basically get a nine-minute tribute to the Star Trek universe and it's youngest child, Enterprise. The star-studded closing party footage sees many previous cast members reunited with the new actors, with sound bites from several of them (including the lovely Linda Park - Hoshi Sato and a big speech by Scott Bakula).

There are two minutes of Enterprise Outtakes, with plenty of classic line-fluffs (the Rosebud one is superb)and Bakula playing pranks and having pranks played on him. It is not very long but at least it should make fans laugh.

The Photo Gallery has about sixty entries, with on-set stills, behind the scenes shots and promotional shots from this season, mainly centred on the last few episodes.

Finally we get a thirty-second trailer for the Borg Invasion 4-D experience available at the Las Vegas Hilton.

There is also an Easter Egg (well there could be more than one but I could not find the others). If you go to the sixth disc and the special features menu, the first screen has the option 'Enterprise Secrets'. If you highlight this and then push left, it will highlight one of the Vulcan ship blueprints. Pressing 'Enter' will take you to a five-minute featurette on the massive struggle by the fans to try and keep Enterprise alive. We get comments from both fans (talking about the huge message of 'living together peacefully' that Star Trek promotes) and cast members (including Scott Bakula) and it is a nice hidden gem. p>Star Trek Enterprise is a vastly underrated addition to the Trek universe that was cut down in its prime. The fourth season brought in some adventurous and innovative ideas but it was obviously not enough to compete with the Reality TV epidemic. There should have been ample reasons for this series to last longer but at least it has been given the DVD presentation that it deserves. The picture quality is superb, only topped by the outstanding audio treatment, and the whole package is made all the more attractive by a rich set of interesting and informative extras that include almost everything you would want - from commentaries and featurettes to deleted scenes and easter eggs. Fans will already be clicking on their shopping baskets to pick up this splendid package, newcomers are advised to become familiar with the previous seasons first even if this still marks a must-have Enterprise offering.