"Wherever our mission takes us, we'll try to have a little fun along the way too, alright? Make a little noise. Ruffle a few feathers." 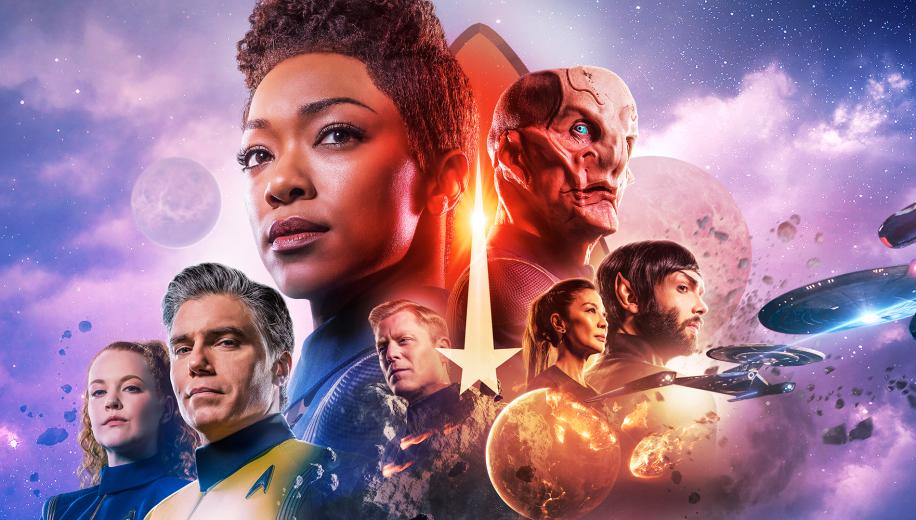 Following the fall of the film franchise, the strongest Trek property returns for its second season with a superb opener.

It's a real shame that the J.J. Abrams Star Trek 'alternative timeline' reboot film franchise went off the rails although, depending who you ask, it may have never been on the right track in the first place, with Abrams showing a fondness for fan servicing familiarity in the first film which arguably went too far in the sequel when he tried to remake the greatest Star Trek of all time and then reverse its seminal ending. Still, it's when Justin Lin took over and turned it into The Fast Trek and the Furious, that fans realised that the new series was truly jumping the shark, in a dirt bike no less, with an entry which would have been fun as a two-parter TV series episode (c.f. Insurrection), but which didn't have what it takes to stand alongside some of the old Trek movie greats.

Fans don't appear too perturbed, however, because - as is the case with many originally Big Screen properties (Netflix has done the same for Daredevil and Punisher alone) - it looks like TV can not only compete, it can arguably do better.

The first season of Discovery may well have its naysayers but it still did a tremendous job against the odds - it had an uphill struggle to work with a central character who wasn't a Captain, did well to establish an impressive new world despite plotting out a prequel period just before Kirk joins the Enterprise, and equally it managed to somehow make the ludicrous spore drive tech tolerable (in spite of being far advanced of anything we've seen even in shows sets hundreds of years later).

Sonequa Martin-Green's lead character, Michael, was equal parts fierce and frustratingly angry, whilst fellow science officers played by Anthony Rapp and Mary Wiseman were just perpetually melancholy and neurotically OTT, respectively, but the show benefited greatly from Doug Jones' ganglion first officer, Saru, and from the presence of not one but two great Captains - Michelle Yeoh and Jason Isaacs. Indeed much consternation came from the events that spun these two more prominent actors' characters, taking us to dark places for a twist-laden final run that made the first season - despite being a comparatively short 15 episodes - feel like two parts.


We may have grown accustomed to it over the years, but this is crazy good for TV.

The 14-episode second season picks up right where we left off, with the tense conclusion to the Federation-Klingon war ending in an (likely temporary) armistice, and the crew of the Discovery - having 'lost' not one, but two Captains - en route to Vulcan to pick up a replacement, shocked to encounter the fabled U.S.S. Enterprise, whose Captain Christopher Pike boards the Discovery to take them on a new mission of great importance involving the investigation of some mysterious signals whose cryptic code cannot be broken.

The arrival of the Enterprise brings with it some conflict for Michael, who knows full well that her estranged brother Spock is assigned to that very ship, whilst Pike fights to gain the trust of a crew who have been burnt before, whilst taking them on one of their most treacherous assignments yet. Season 2's hour-long opener is a hell of a way to get the show starter again, introducing Anson Mount (Hell on Wheels, Marvel's Inhumans) as a strong Christopher Pike (formally not only seen in the original series but actually the reboot movies, where he was played well by Bruce Greenwood), who has a charm and presence about him, isn't afraid to get in the thick of the danger, and thankfully has some of the best Captain-like one-liners we've heard in a while, including his alternative to 'engage', which is superbly snappy.

There's just the right amount of wit too (sneeze notwithstanding), particularly with a late addition to the crew (stand up comic Tig Notaro), and the main characters slip right back into their roles, with Michael Burnham arguably proving much more tolerable this time out, and Tilly still being painfully silly, but at least getting one brief tender moment. There's also plenty cleverly left enshrouded in mystery - from Spock to the ultimate fates of the rogue Captain Georgiou and even the 'good' Lorca - as well as Voq too no doubt - with the very posters for the second season giving away more than the first episode does.


With a multitude of possibilities as to where the story can go and what they can explore, and a bold new Captain to add into the mix, the show goes from strength to strength.

In terms of action, Discovery enjoys some feature film-level limelight after the cancellation of the movies, and rises to the promotion with some tremendous setpieces, and - for once - seamless CG. With camerawork reminiscent of the excellent job done on the Battlestar Galactica reboot series, a suitably engaging score and Dolby Vision coming into play (the latter leaving this the best the show has ever looked by far, and a solid step up from the first season's gritty visuals), putting this alongside the big boys in terms of presentation and sheer spectacle. We may have grown accustomed to it over the years, but this is crazy good for TV.

After an hour of the new season of Discovery it's hard to see how you couldn't be hooked, making the long weekly wait between episodes even more painful. With a multitude of possibilities as to where the story can go and what they can explore, and a bold new Captain to add into the mix, the show goes from strength to strength.