Give yourself and your new Move controllers a workout 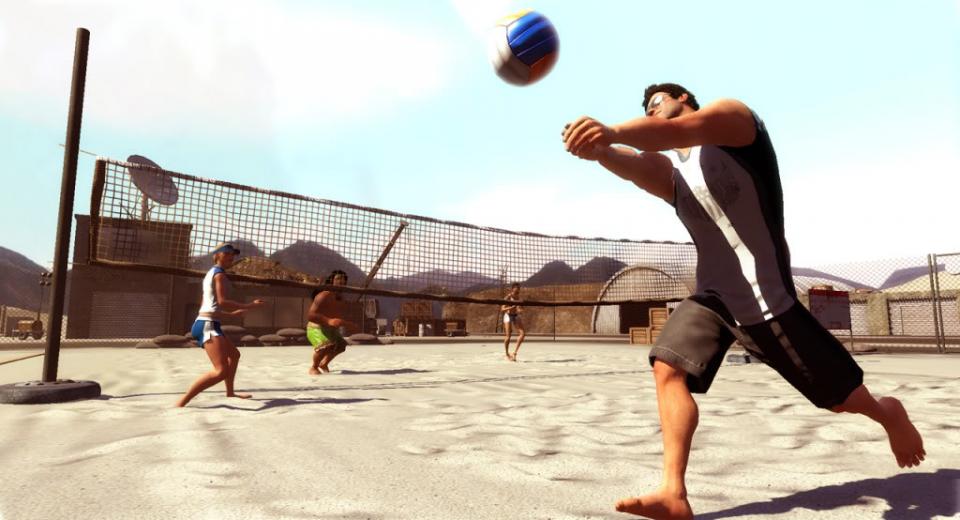 So this is it, the next big thing in the on-going console war, motion control. Microsoft and Sony will now battle it out in the build up to Christmas in order to win the hearts of once loyal Nintendo Wii fans. And here we have one of the first releases from Sony to go along with the big launch of Move; Sports Champions (no guesses how the name was created.) We have known for some time now that this was going to be a launch title and that it would mostly appeal to younger audiences, but with current generation graphics and a more mature style, it promises to be accessible to a broader market than other rival titles such as Wii Sports Resort.

One potential weakness with this game is that the developer, Zindagi, have only been set up in order to create games for the new motion control functionality. This seems to suggest that they will have a limited knowledge of what games this generation need to have in order to be successful. On the other hand however, this could also be a good thing as they will only need to concentrate on creating titles solely for PS3 and games that use Move. So it seems unlikely that they will be distracted by faffing around with other titles and genres.

With just a year or more in development, it may be evident that this title won’t have as much polish as it can, with the developer utilising new technology. But if the mechanics and the technology work well together then most importantly it should be fun to play. So here are the potential flaws of Sports Champions (SC); with it being a launch title the technological side of the game could fail, the graphics may be off and the game may be a half-baked effort just to make it release in time for launch. But good approvals have been coming from the games conventions that Move has been demonstrated at, so hopefully this will mean that SC will be a launch title that doesn’t have limited longevity. Will this live up to its name and be champion, or will it fall at the first hurdle?

One thing must be said before we kick off here; the graphics on this are far better than what the Nintendo Wii can offer. Unquestionably, this is a big positive for newcomers as this is one thing that has put many people off the rival console with inferior graphics and a childlike demeanour. With actual life-like characters, not avatars, the game immediately feels as if it is aimed more towards the adult market as opposed to children. That’s not to say, however, that this won’t appeal to kids, because it will. As soon as they see you play, they will want to. Monkey see’s and monkey does. The suitable music and effects will also enable you to immediately get on with Champions as you can hear every background noise you should, such as the waves crashing on the shore as you play volleyball or the satisfying thud as your arrow hits its target, whilst the invigorating ‘battle’ music will prepare you for the upcoming challenges you will face.

The graphics aren’t the best quality you’ll see around, as you can appreciate due to this being a relatively new studio that produced the title and, more importantly, the actual gameplay is more important than its aesthetic value. These graphics give the game a more relaxed feel though, and makes it more accessible to a wider audience, which is also reflected through the menus throughout the game. After calibrating the controller, you’re treated to a horizontal scroll selection of the games available to you; Beach Volleyball, Gladiator Duel, Archery, Bocce, Disc Golf and Table Tennis. The icons resembling these are enlarged on the main menu which makes the selection process easy by eliminating the chore of selecting a small box with the motion controller. Having said this though, once into the sub-menu for each sport, there are a couple of instances whereby you can struggle to press the correct arrows etc to choose which number level you wish to play. One minor gripe yes, but this is simply down to the accuracy and sensitivity of the Move controller and that is very much a credit to Sony.

In order to mix things up throughout the game, Zindagi have designed some cracking levels for when you advance into the latter stages of the champions cups. For example, when playing Bocce, you encounter uneven playing surfaces such as parks, misshapen strips and even tyres to throw your ball through. This, whichever way you choose to look at it, will either set you up for a good old challenge or leave you cursing at the TV because the AI has well and truly beaten you. But credit to the development team, a lot of thought and care has been put into crafting these levels throughout every game, with volleyball locations having lovely ‘picturesque’ scenery.

There is one thing that has been omitted that would improve the game somewhat, and that’s the ability to create your own character, which, let’s face it, is a key part to many games these days, as you can put yourself into them. Instead, you are given a selection of generic sportsmen and women to play as, with some undoubtedly being unlocked as you progress through each sport. But this is made up for in the fact that throughout the game you can collect new clothing and equipment for each character by earning enough points to earn stars after each round of competition. This will keep people playing to strive to kit their character out the best they can. These characters have ‘personas’ but they don’t speak; they only have a couple of utterances to show their emotions in-game. All character models are not too ‘cartoon’ inspired which makes the game have a higher feel of realism, though one of the more muscular characters does seem to have calves the size of watermelons.

Now this is usually the part of the review whereby myself or any other reviewer would praise, slate or give a ‘so so’ review to the game in question based on how it handles, be it through its character control, storytelling or strategic elements. Well, to put it simply, here you can’t. Sports Champions is not a game that you can judge on the usual criteria, there’s only two ways about it; it either works and works well, or it’s a complete shambles. And I am pleased to report that here, it is very much so the former of the two. The Motion control is sublime, and without going on too much about the tech as this is a game review, it is incredible how one-to-one the motion control actually is. It really will follow the slightest flick of your wrist and it can judge the speed of your throws/hits and movements with frightening accuracy.

The structure of the game gives you increasingly difficult opponents to face off against with Bronze, Silver and finally Gold Champions Cups to complete. In the middle of each cup will also be a challenge stage, giving you targets to hit under certain time constraints for example. This keeps you from going through the cup just playing the same game and sometimes the same stages over and over again and gives you the chance to master your technique with tricky challenges to complete. They are tricky too, they will challenge you and your technique will have to be at its best to master the harder offerings.

Each sport also feels like you are playing it for real, as opposed to swinging a controller round the room. In table tennis you are encouraged to play shots that see you moving forwards to hit the ball, and in volley ball you have to throw your arms in the air to spike and set balls up for your team mates. Inevitably, this will leave you with aching limbs and a lame excuse why so, when you arrive at work the following day. The in-game mechanic feels even more realistic in the fact that when throwing a disc or the Pallino in Bocce, it’s neither too easy for you to launch it down the pitch, nor is it too difficult that either will land three feet in front of your character.

The fact that these sorts of games don’t have a story or campaign as such will immediately be reflected in the appeal of replaying the game over and over again. There is an initial factor that won’t allow you to put the game down for an hour or two at a time, but this really is a family or party game not to be enjoyed alone. So with that in mind, this will get rolled out at drunken parties or in order to spice the Christmas/Boxing day meet up. The fact that there are collectibles to be had and three difficulty levels for each sport, then it will more than likely see you playing this game for some time before you attain everything that there is to be had. Extending its replayability, Sports Champions allows for two players to face off against one another split screen and ‘in-house’ rivalries will obviously be settled via a challenge of Bocce or Table Tennis.

It’s hard not to enjoy playing Sports Champions, although it can leave you wondering how your opponent just pulled that shot off. Despite being a peripheral launch title, it is one of those that will, or should at any rate, stay in your collection for as long as you have access to Move. It won’t hold your attention like a triple A shooter or an RPG, but playing this will make a welcome and refreshing break from any other games that you have been gaming on recently.

And the runners up prize goes to...

Titles that first launch with new technology are not usually worth shouting home about but Sports Champions breaks the mould and provides PlayStation users with a title they can be proud to play. Boasting some beautiful scenery, a control scheme that works brilliantly and a good variety of sports to play you can't deny that this is a good game. Despite being frustrating at times, and looking like a prized prawn when playing by yourself, this should be in any collection of owners of the Move peripheral.